Airbnb: From cash-strapped roommates to billionaires 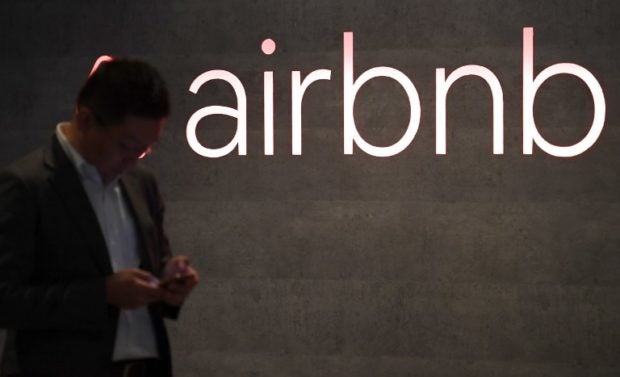 This file photo taken on June 14, 2018, shows the US rental site Airbnb logo displayed during the company’s press conference in Tokyo. AFP FILE

SAN FRANCISCO, United States – A decade ago a pair of San Francisco roommates decided to make rent money by using air mattresses to turn their place into a bed-and-breakfast when a conference in the city made hotel rooms scarce.

The brainwave led to the creation of Airbnb, a startup now valued at more than $30 billion which boasts millions of places to stay in more than 191 countries, from apartments and villas to castles and treehouses.

Here are some key facts about the sharing-economy star, which has sent tremors through the hotel industry:

– In late 2007, with hotel rooms selling out due to a design conference in San Francisco, Brian Chesky and Joe Gebbia decide to make some extra money to help cover the rent in the apartment they share, by using air mattresses to turn it into a bed-and-breakfast.

– A third former roommate of theirs, Nathan Blecharczyk, teams with Chesky and Gebbia in a venture they call “Air Bed and Breakfast,” launching a website in August of 2008.

– Struggling to get the business off the ground, the startup founders stage a quirky stunt at the Democratic National Convention in late 2008, selling boxes of cereal custom-branded “Obama-O’s” and “Cap’n McCains” for $40 each — raising enough money to stay afloat, and earning much-needed publicity.

– The startup name is changed in March of 2009 to Airbnb as it envisions being about more than sleeping on air mattresses.

– In April of 2009 Airbnb gets $600,000 in seed funding from Sequoia Capital after a string of rejections from other venture capitalists.

– In 2011, Airbnb boasts of being in 89 countries and of booking more than a million nights’ lodgings. The startup becomes a Silicon Valley “unicorn” valued at a billion dollars based on some $112 million pumped into it by venture capitalists.

– In June of 2012, Airbnb announces that more than 10 million nights of lodging have been booked on its service, with some three-quarters of that business coming from outside the US.

– In 2012, Airbnb is hit with the problem of some guests leaving homes in dismal condition due to parties or other raucous activities. The startup puts in place a million-dollar damage coverage policy as a “Host Guarantee.”

– In September of 2016, Airbnb raises funding in a round that values the company at $30 billion.

– In November of 2016, Airbnb launches Trips, tools that tourists can use to book local offerings or happenings.

– In early 2017, Airbnb announces plans to double its investment in China, triple its workforce there and change its name to “Aibiying” in Chinese.

– In September of 2017, Airbnb teams with Resy, which becomes a minority shareholder in the new venture, to offer table reservations at 700 restaurants in 16 US cities.

– In 2018, battling a global backlash against “sharing economy” startups disrupting traditional industries, Airbnb is forced to cancel thousands of reservations in Japan to comply with a new law regulating short-term rentals. /cbb

Read Next
The Arangkada Philippines Fora 2018
EDITORS' PICK
COVID-19 wards in 2 more hospitals reach full capacity
Chatting with companions, answering calls on MRT 3 trains banned
Water remains our saving grace right now
Defend Your Health! Shop health essentials from home with Rose Pharmacy’s Online Sale
Navotas will be on lockdown from July 16 to 29 – Tiangco
World-standard accounting: Unlocking your financial potential
MOST READ
‘I am not my father,’ says daughter of lawmaker who voted to deny ABS-CBN franchise
Vilma Santos-Recto ‘prepared’ to face ‘consequences’ over ABS-CBN franchise vote
Did a meme get on Agot Isidro’s nerves? She’s asking ’24 Oras’ to fact-check it
In slap on face of PH, China replies to Locsin on tribunal ruling: It’s invalid
Don't miss out on the latest news and information.