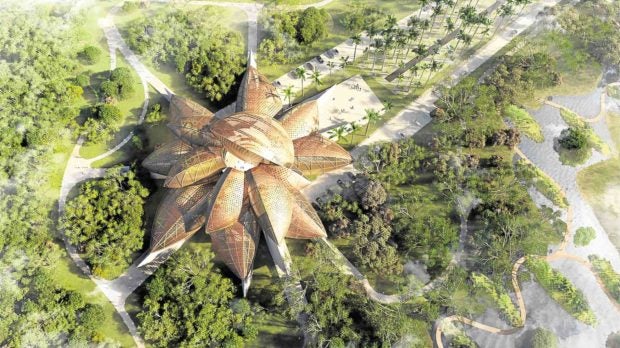 The Camsur Capitol Building will be a spiraling assembly of pili-shaped husks.

It’s iconic, sustainable, and future proof, and it’s hoped that the Camsur Capitol Building will eventually revolutionize the way government offices are built in the Philippines.

Camsur Capitol, soon-to-be home of the Camarines Sur provincial government upon its completion, is a visionary project that is not only expected to “propel the province into a future of technological advancement, environmental sustainability and civic engagement.”

It is also seen as a “once-in-a-lifetime opportunity” to showcase to the world Camsur’s rich heritage, local delicacies, the region’s landscape, and more importantly, its people, through architecture.

“It typifies the whole Camsur and its people. It will be modern and unique but it will still represent the people’s culture,” explained Camarines Sur Rep. Luis Raymund “L-Ray” Villafuerte Jr. “Camsur is known for the pili nut, Mt. Isarog, the rice fields and the landscape, and all of these were taken into consideration when the CamSur Capitol was designed.”

According to Villafuerte, the concept of creating something iconic started a year ago as the existing capitol building needed to be demolished as it was “old and no longer safe.”

“So we thought of (putting up) an iconic building that will set us apart from the rest. We looked for an architect who can design something unique but at the same time, affordable and within our budget,” he said. 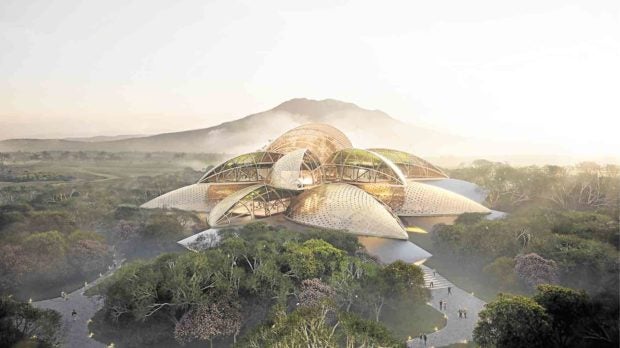 According to Villafuerte, the proposed Capitol will cost P500 million and is targeted for completion in two years’ time.

“We’re really planning to push this because this will put our province on the map. We want this to be one of the most Instagrammable areas in the country… and with this, we also aim to set the standard among government buildings,” Villafuerte added.

This building, he further noted, will just be the first among the many new iconic structures that people can expect from Camarines Sur, as they plan to adopt the same building principles for other upcoming infrastructure projects in the province.

Meanwhile, Arch. Carlos Arnaiz explained during the recent launch of this iconic structure in Makati City that the design of the Camsur Capitol is a “spiraling assembly of pili-shaped husks that appears like a mountain from the horizon and like a flower from the sky. Each pili-shaped volume is a metal sun-screen protecting the building’s interior from the intense tropical sun and creating a series of shaded roof terraces.”

Arnaiz, founder of the New York-based Carlos Arnaiz Architects, also said that the Capitol will be divided into four levels. The first will be a covered parking and service area while the second floor will be a multipurpose lobby plinth crowned by a covered open-air atrium.

The third floor is the administrative level outfitted with the latest innovations in workspace planning while fourth will be the Governor’s quarters and viewing deck offering panoramic vistas of Mt. Isarog.

This iconic structure will also sit in the middle of a new verdant public park with palm promenades, fountains and a forest grove of native trees.

“One of the wonderful things about the congressman and the governor (of Camsur) was that they were clear about what they needed, but they also gave us a lot of artistic freedom so that concept was what we created and they embraced it right away,” Arnaiz said.

“Hopefully, the Camsur Capitol could be a milestone moment, in that it marks a new way of thinking of what government buildings can be, and it might spark a positive competitive spirit across provin-ces,” he further noted.