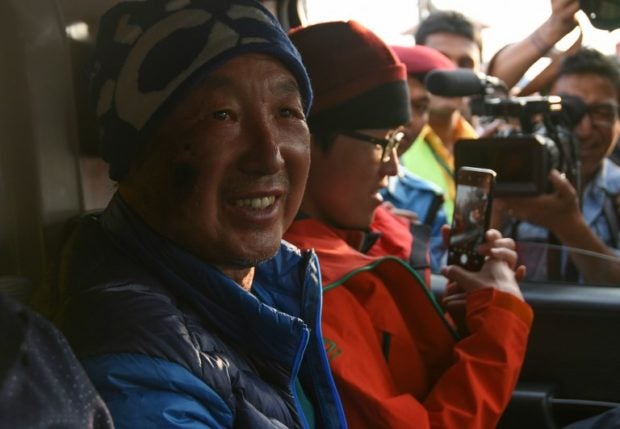 In this picture taken on May 16, 2018, Chinese double amputee climber Xia Boyu, who lost both of his legs during first attempt to climb Everest, looks on at Tribhuvan airport in Kathmandu, after returning from a successful summit of Mount Everest. AFP

HONG KONG — Fulfilling a dream on his fifth attempt, China’s Xia Boyu, at age 69, recently became the oldest double amputee to scale Qomolangma, known as Mount Everest in the West.

“I knew I would make it to the top sooner or later, but I didn’t expect it to take 43 years,” Xia recently told China Daily while recovering from frostbite in a Beijing hospital.

Xia lost both feet to severe frostbite on his first try at scaling the peak in 1975. He eventually returned to try to complete his goal, but subsequent attempts were offset by an avalanche (2014), an earthquake (2015) and bad weather (2016).

Xia is now an inspiration not just to mountaineering enthusiasts but also the growing ranks of elderly people in China.

And this growing number is opening up opportunities for healthcare providers and companies that specialize in goods and services for the elderly.

According to the China National Working Commission on Aging, 248 million Chinese will be over the age of 60 by 2020 (up from 241 million people at the end of last year), accounting for more than 17 percent of the country’s total population.

The Economist Intelligence Unit (EIU) expects the over-60 population to reach 369 million by 2030, when it will account for more than one-fourth of the population.

The healthy life expectancy in China is now higher than in the United States, according to the World Health Organization. Newborns in China can now expect to live 68.7 years, compared to 68.5 years in the US.

“China’s healthy life expectancy at birth has surpassed the US, mostly due to improved diet and medical care for women,” said Dan Wang, an analyst with the EIU.

“The young-to-middle-aged Americans are also subject to much higher rates of drug overdose deaths and suicides. But adult life expectancy in China still lags the US, a combined result of pollution and less sophisticated healthcare.”

China is now working to address this discrepancy. Under the current Five-Year Plan (2016-20), the country wants to raise the overall life expectancy to 77 by 2020, one year more than in 2015.

A recent report by the Social Sciences Academic Press, the publishing unit of the Chinese Academy of Social Sciences, said 15.3 percent of elderly Chinese need additional care, up 9 percentage points from 2000.

The country is already working on measures to develop more comprehensive elderly care, according to the China National Working Commission on Aging.

By 2020, China wants a national medical and healthcare system to cover both urban and rural residents, providing more elderly care.

To meet those goals, the government has launched programs to train almost 4.5 million nurses by 2020, more than three for every thousand people.

“Regular health examinations are necessary, especially for rural China where most people will not go to hospitals unless they have a serious disease,” said Wang.

A key factor in both developing the market for elderly care and delivering it will be the growth of online medical care delivery, said Karen Simpkins, a healthcare analyst at BMI Research.

“The State Council (China’s Cabinet) has given the green light to internet hospitals. According to a policy agreed at a State Council executive meeting chaired by Premier Li Keqiang on April 12, medical institutions will be allowed to provide online diagnostic services for some common and chronic diseases in patients’ follow-up visits to their doctors,” said Simpkins.

“The top two levels of hospitals within the country’s three-tier system will be encouraged to provide online services, including consultations, reservations and test result inquiries,” she said.

“The initiative forms part of the Internet Plus healthcare policy and a broader strategy of using smart technology to counter increasing medical personnel shortages.”

The growth will open up opportunities in the private sector. “Internet companies will also be allowed to operate online medical services, but these will have to be tied to physical hospitals,” said Simpkins.

Alibaba attempted to launch an online hospital as early as 2014. Since the government decided to move forward with these initiatives, the company has entered into partnerships with hospitals in Shanghai and nearby cities.

Alibaba’s rivals are also exploring options in this space.

Tech giant Tencent has invested in WeDoctor, an online healthcare service based in Hangzhou, capital of East China’s Zhejiang province. The service allows patients to video chat with doctors and make appointments and prescription requests online. WeDoctor plans to list in Hong Kong this year.

Ping An Insurance has partnered with Varian, a US maker of radiology machines, to establish Ping An Healthcare and Technology. The company will use AI, cloud computing and big data technologies to expand access to cancer care in China.

Of course, care for the elderly is not limited to those who require medical attention.

Because of China’s long-standing one-child policy, many families find it hard to take care of the elderly. Infrastructural challenges and an increasingly demanding work culture also add to the burden.

“The constrained living space and competitive working environment make it difficult for young people to accommodate the elderly at home,” said the EIU’s Wang.

She feels China’s housing structure is not elderly friendly. “Upgrading or remodeling the current housing for use by the elderly is in high demand,” Wang said.

“So far, there are few companies engaging in the area. One main reason is a lack of national standards for property developers or independent contractors to follow, so that they can avoid lawsuits if anything goes wrong.”

Changing behavior is also opening up new opportunities in the sector.

“The trend is shifting to using senior care facilities over staying with an offspring in big cities, albeit slowly,” said Wang.

The percentage of privately owned (as opposed to government owned) elderly care institutions in China is about 40 percent on average, with some provinces topping 50 percent. But most are understaffed.

A cultural bias against using senior care facilities presents challenges. A study by Social Sciences Academic Press showed that more than half of elderly Chinese prefer living with their children.

“As such, many will hire domestic workers to help the elderly as a compromise,” said Wang.

This may also create a demand for additional services with a personal touch.

China’s boom in the high-tech sector may provide abundant opportunities to explore robot or AI companionship for the elderly, said Wang.

According to a study by the Hong Kong Trade Development Council (HKTDC), elderly middle-class individuals on the Chinese mainland are willing to spend on health and lifestyle-related products like saunas and training shoes. They also prefer making their own purchasing decisions.

“Normally, many people would think that the elderly are quite passive in terms of spending, that they tend not to spend too much and wait for the children to buy things for them,” said Billy Wong, principal economist for Greater China at the HKTDC.

“From our focus group discussions, what we find very interesting is the fact that … the middle-class elderly, most of the time, make their own choices, make their decisions on what to buy and pay for products and services themselves.”

The government is working to ensure its elderly population will also have the monetary power to take care of themselves and afford what they need.

“The government should ensure sufficient pension payments for the retired. Most provinces in China are running a pension account deficit and some have already run into pension arrears,” said Wang from the EIU.

“There are efforts to reverse the trend. The central government is trying to establish a unified national pension system, with pension funds entrusted to the National Council for Social Security Fund to obtain better returns on investment,” she said.

Wang also believes the government should tap experienced retirees and bring them back into the labor force if they are interested in working.