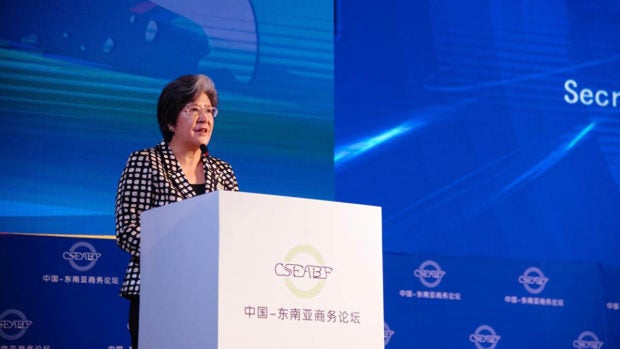 KUNMING, China — As China and the Association of Southeast Asian Nations (Asean) celebrate the 15th anniversary of strategic partnership this year, a new era of cooperation has begun to enhance connectivity in various areas.

Speaking at the second China-Southeast Asia Business Forum on June 15 in Kunming, capital of Southwest China’s Yunnan province, secretary-general of the Asean-China Center Yang Xiuping said the two sides have formed an omnidirectional, multilevel and wide-ranging cooperation pattern since the establishment of dialogue relations in 1991.

The theme of the forum was Connectivity, Cross-Border Economy and Integrated Collaboration. As a sideline event of the fifth China-South Asia Expo, more than 600 delegates of government officials, industry leaders and entrepreneurs from China and Southeast Asian countries participated.

“Both sides have entered a critical period of future development, with new opportunities ahead,” said Yang.

This year marks China’s 40th anniversary of reform and opening-up and the beginning of Asean’s second 50 years of development. Besides setting 2018 as the China-Asean Year of Innovation, the two sides are working together to formulate the China-Asean Strategic Partnership Vision 2030 to guide future relations.

The progress of regional integration is also at a key stage, said Yang, noting barriers in the current trend of globalization.

Yang believes close interactions between China and Asean, especially with the promotion of the Belt and Road Initiative, have provided a strong driving force for regional connectivity, integration and cross-border economic cooperation.

In 2017, China-Asean trade volume exceeded US$500 billion, while two-way direct investment reached a cumulative total of nearly US$200 billion. The mutual visits amounted to nearly 50 million in the same year, according to Yang. 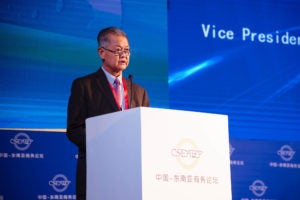 “In Malaysia, investment from China has shown a positive impact in terms of creating more jobs and stimulating the economy,” said Liew Sew Yee, vice-president of the National Chamber of Commerce and Industry of Malaysia. A total of 197 China-related manufacturing projects have been launched between 2000 and 2016, with a value of 14 billion ringgit (US$3.5 billion). More than 30,000 people are employed by these projects, said Liew.

In addition to trade and investment, Liew said cooperation in education is also beneficial for society. A case in point is the establishment of Xiamen University Malaysia, which aims to cultivate more talent from China, Malaysia and other Asean member states.

With a population of 600 million and an up-and-coming middle class, Liew said the market potential is huge in Asean, which is one of the world’s fastest growing regions. The middle class will account for 65 percent of Asean’s entire population.

“Asean can benefit from the Belt and Road Initiative in terms of connectivity, trade, investment and tourism,” said Liew, who believes China’s strength in capital and technology can help meet the demand in infrastructure in Asean countries.

Chanthachone Vongsay, vice-president of Lao National Chamber of Commerce and Industry, said the cross-border economy is key to enhancing cooperation between China and ASEAN. This includes establishing special economic zones and industrial parks along the border, more policy incentives and a proper legal mechanism for trade distribution.

To further develop regional integration, Yang from the Asean-China Center said that while strategic planning can provide guidance on a macro level, more negotiation in free trade, further cooperation in finance and innovation, and support from the community is of equal importance.

“With each other’s advantages, the strengthened cooperation between China and Asean can further spur trade and investment growth, providing more potential for the exploration of the regional economy in Southeast Asia,” said Liew from the National Chamber of Commerce and Industry of Malaysia.