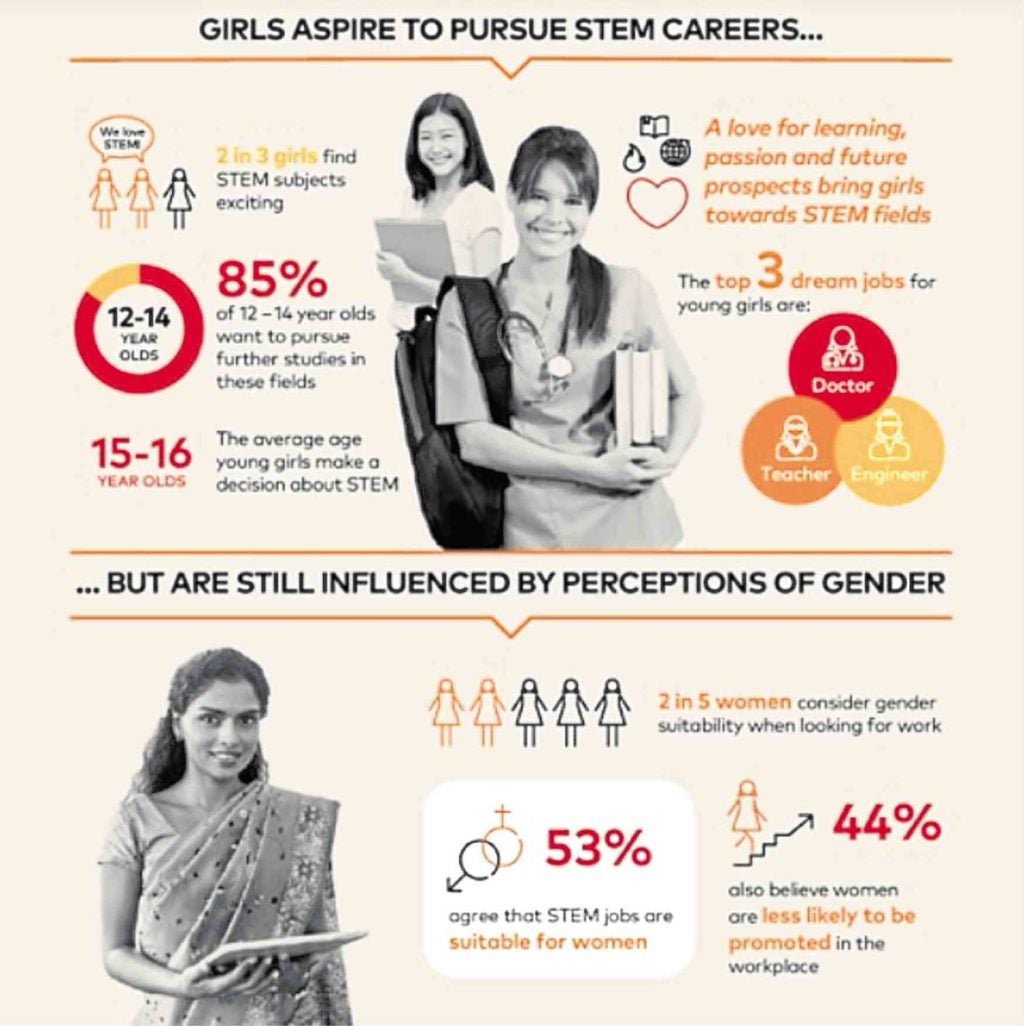 With more encouragement from their parents and the academe, more young women in the Asia-Pacific region will be empowered to study STEM (science, technology, engineering and mathematics) subjects—and to further help them pursue careers in such fields, gender bias in workplaces must be eliminated.

These are just a couple of highlights from a study by global payments technology company Mastercard published in the report “Girls in Tech: The Path to a Career in Stem.” Now on its third edition, the research was conducted via an online survey of 2,426 girls and young women ages 12-19, classified as teens, and 20-25, classified as first jobbers, in six Asia Pacific countries (Australia, China, Indonesia, India, Malaysia and Singapore).

The study asks one key question: How can we get more young girls and women into a path toward STEM careers?

These findings were released in line with Mastercard’s third Girls4Tech program in Singapore held this month at Nanyang Girls High School, which was organized in partnership with the Singapore Committee for UN Women. Three hundred students were guided by Mastercard employees through an experiential STEM-based curriculum.

Among teens, results show that 85 percent of 12- to 14-year-olds are very interested in STEM subjects, especially those who are already inclined to pursue further STEM studies. In four of the six Asia-Pacific countries surveyed, namely, China, Indonesia, Malaysia and Singapore, the top-ranked STEM profession is doctor; vet and engineer were chosen by Australia and India, respectively.

However, girls at this age also noted they found STEM subjects “highly difficult, with boring formats and a highly academic approach.” Moreover, as the variety of school subjects diversify by the time they hit 15, the study finds that 51 percent of teens change their minds about pursuing a STEM-related education, making this age a critical one when it comes to sustaining girls’ interests.

According to the study, parents and educators are still the No. 1 influence on young girls, and therefore the best people to support them in their STEM studies, and to make learning these subjects more fun. Scholarships, visible female role models, and overall, more support from their schools, were also cited by teens as other forms of encouragement for them to pursue STEM studies and careers.

As for the women who are starting out in STEM industries, Mastercard’s study shows that gender remains a factor in their job search: 42 percent still consider “suitability for women” as a criteria in choosing a career; only 53 percent agree that STEM jobs are suitable for women; and 44 percent believe women are less likely to be promoted compared to men in STEM workplaces.

Furthermore, the report states that 40 percent of first jobbers said women were less likely to choose a STEM career because these jobs had more males working in them, and also because of the perception that women were less interested in STEM.

Of course, there are the biases when it comes to traditional gender roles, particularly that of motherhood. According to the study, 55 percent of first jobbers say a wife is expected to put her family first over work (an attitude more prevalent in Indonesia, India and Malaysia), while 52 percent find men and women are not given equal pay for an equal amount of work (more common in Australia, China and India).

And while 84 percent say it is good for women to have their own careers, 61 percent say they are not given enough support to balance their work and family life, and that 43 percent still need permission to work outside the home (higher incidence in Indonesia, India and Malaysia).

“By nurturing the next generation of female scientists, technologists and designers, we can help build more inclusive communities and better, brighter futures. While findings from our latest STEM research are encouraging, more can be done to attract girls and women to this field,” says Georgette Tan, Mastercard senior vice president of communications. “The solution to this lies in actively supporting all aspects of a women’s career trajectory, from education to career ascension.”