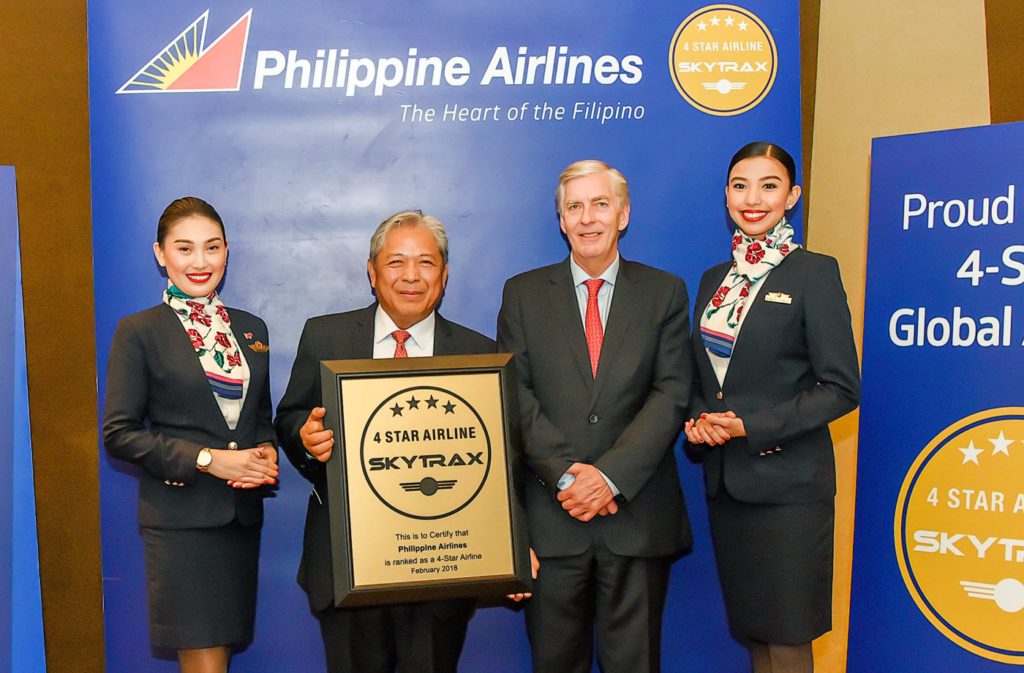 This four-star airline rating was described by Skytrax as a mark of “quality distinction that recognizes excellent standards of product and staff service across different assessment categories for both the onboard and airport environment.”

In a statement posted on the aviation rating firm’s website, Skytrax chief executive officer Edward Plaisted said: “This recognizes the great improvements that the airline has introduced over the last two years, both in terms of product change and development and enhancement of the front-line staff service. New and retrofitted aircraft have played an important part in the quality improvement process, and this looks set to develop further when Philippine Airlines introduce the A350 into their fleet. We look for consistency of quality in the 4-star rating, and we now entrust Philippine Airlines to ensure this is duly delivered to customers.”

“This is a big win for the Philippines,” said PAL chair and chief executive officer Lucio Tan. “We are elated by this recognition which is a victory for the more than seven thousand members of the Philippine Airlines family. Our achievement is the country’s achievement and we share this with all Filipinos around the globe.”

“Our get-that-star journey began in 2016. Our efforts over the last two years have borne fruit,” said PAL president and chief operating officer Jaime J. Bautista. “Since 2016, we have embarked on a journey of rolling out in-flight and on-ground innovations, opened new routes, increased connectivity across PAL’s route network, added new aircraft to our fleet and importantly, invested in the Buong Pusong Alaga ( whole-hearted) training of all our cabin crew, ground crew and service providers domestically and internationally in order to enhance the passenger travel experience and earn a higher Skytrax rating,” Bautista added.

With the four-star rating now certified, PAL aims to intensify efforts to unveil new products and expand routes, including the launch of non-stop services to New York and Brisbane as well as flights to India and additional routes to Japan and China within 2018.

“By offering the public a globally competitive airline service, we are empowered to attract more tourists to visit the Philippines, experience our country’s beauty and our people’s warmth, and to generate more economic activity for the Philippines,” said Bautista.

Skytrax completed the quality audit evaluation of Philippine Airlines in December 2017, examining in detail all product and service delivery areas across the customer trip experience.

Eight of the airline’s 15 Airbus A330s have undergone a total cabin transformation from a single economy to a tri-class cabin to make it more comfortable on all classes. The latest Boeing 777s and the incoming Airbus A350s are expected to further upgrade the PAL fleet for the airline’s long-haul international routes.

To improve on-ground service at airports, PAL renovated the inter-terminal transit lounge at the NAIA Terminal 2, improved its business class check-in product, introduced a more efficient boarding procedure and put up airport terminal signage for passenger convenience. By the second quarter of 2018, it will open a new, bigger and more sophisticated Mabuhay Lounge.