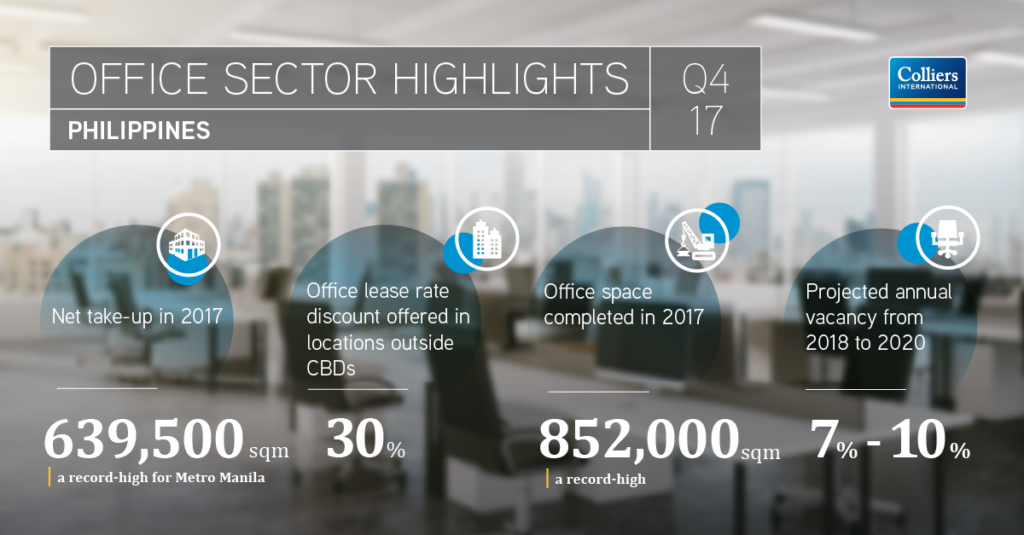 Metro Manila’s property sector turned out to be more resilient than expected in 2017 as the offshore gaming industry, out of nowhere, made up for the slack in demand from business process outsourcing (BPO) firms, property consulting firm Colliers Philippines said.

The growth in net take-up was attributed to the strong domestic economy alongside new jobs created in the finance, insurance, real estate, banking and other related sectors.

“The story in the office sector has been the decline of BPOs in 2017 and as of end of first nine months of 2017, we were even cautioning about the possibility of one-off demand from POGOs (Philippine offshore gaming operators), but if you look at the fourth quarter numbers, it outperformed all our forecasts,” Macaranas said.

Aside from the entry of POGOs – online gaming operators serving overseas markets, especially mainland China – Macaranas also cited an improvement in the pace of proclamations by the Philippine Economic Zone Authority in Metro Manila.

But office supply in Metro Manila likewise saw a record increase in inventory last year, with about 850,000 sqms completed in 2017, thus, Macaranas said vacancy rates would likewise move up.

From 5.3 percent at present, Colliers expects vacancy rates to rise to the 7-10 percent range in the next few years, assuming a consistent 6 percent annual increase in net take-up.

Looking ahead to 2018 onwards, planned projects of developers still total over 900,000 sqms annually until 2020.

Among the submarkets, Manila Bay Area and Fort Bonifacio are seen to have the advantage in the short to medium term given the respectable size of new projects, and the largely concentrated nature of developments in these locations. Notable upcoming buildings in Fort Bonifacio include Daiichi’s The Finance Center, Alveo’s High Street South Corporate Plaza 2, and Megaworld’s World Commerce Plaza.

Colliers believes that a vacancy rate between 5-9 percent is “respectable.” On one hand, this level is seen to provide tenants with enough office space options to choose from, and on the other hand, landlords are seen to have the opportunity to compete with counterparts based on cost, location, and building quality.

Notably, this is the first time in the last seven years that the market has an office vacancy rate of above 5 percent, signalling a shift from a landlord-driven market.

In the long run, Colliers sees a potential for Ortigas to re-emerge as a key business district given the planned buildings due for completion in 2020. Around 44 percent of total supply for that year will come from Ortigas, from developments such as SM Keppel Land Tower by BDO-Keppel, SM Mega Tower by SM Prime, Glas Tower by Asya, and Double Dragon’s Jollibee Plaza.

“Today, the office sector is better-positioned compared to a year ago with the late 2017 surge of PEZA building proclamations and a well-established government with clear economic policies. Relations with other countries such as the United States, Japan, and China have been proven relatively stable, which should keep investors interested,” Colliers said in a research note.