Trump and Abe agree to disagree on trade 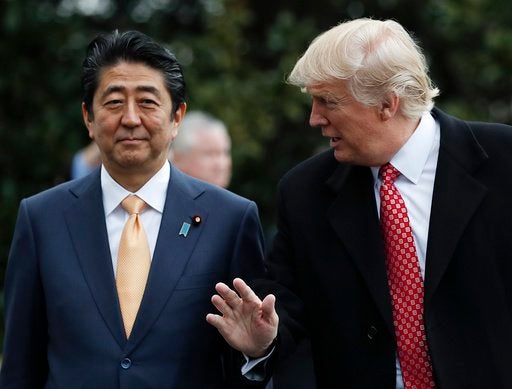 In this photo, taken Feb. 10, 2017, US President Donald Trump talks to Japanese Prime Minister Shinzo Abe (left) as they pause before boarding Marine One on the South Lawn of the White House in Washington, for the short trip to Andrews Air Force Base en route to West Palm Beach, Florida. (Photo by CAROLYN KASTER / AP)

Even best friends are bound to have their disagreements, and Japanese Prime Minister Shinzo Abe and visiting US President Donald Trump are no different.

The prickly issue of trade has divided both leaders time and again – yesterday (Nov. 6) was no different, even as they vowed to move forward on the US-Japan alliance.

Mr. Trump lashed out at the United States’ trade relationship with Japan in a meeting with businessmen yesterday, saying that Japan has been “winning” for decades at the expense of the US.

“We want fair and open trade, but right now our trade with Japan is not fair and open,” he said. “The US has suffered massive trade deficits with Japan for many, many years. So, we will have to negotiate, and we will do this in a friendly way.”

He cited the “many millions of cars sold by Japan in the US, whereas virtually no cars go from the US into Japan.”

Hours later, he again broached the “chronic” issue while standing beside Mr. Abe at a news conference. The US trade deficit with Japan last year came up to US$68.9 billion (S$94 billion), and Mr. Trump called for a “fair, open and reciprocal trade relationship.”

Mr. Trump hopes to move forward with a bilateral free trade agreement (FTA) with Japan, a task left to their deputies to iron out through a bilateral economic dialogue.

US Vice President Mike Pence and Japanese Finance Minister Taro Aso sat down in Washington last month, in a meeting that produced no clear outcomes.

Yesterday, Mr. Abe focused more on the need to establish a rules-based economic order in the Indo-Pacific. Skirting a question on Mr. Trump’s comments about Japan trade, Mr. Abe said the “question about the economy is not restricted only to bilateral trade, but also (covers) the entire region.”

“The making of high standard rules is something we want to pursue, and we will take efforts to create a broad economic order in the Indo-Pacific that is fair and effective,” he said.

He had noted that the US and Japan – as the largest and third-biggest economies in the world – make up about 30 per cent of the world economy and share values such as freedom and fairness.

If Mr. Abe’s comments sound familiar, it is because they contain echoes of the Trans-Pacific Partnership (TPP) deal, which was hailed as the gold standard of free trade pacts. Its focus lies in not only breaking down trade restrictions, but also ensuring fair competition.

But the TPP is one issue over which the two disagree. In one of his first acts after taking office in January, Mr. Trump pulled the US out of the TPP. Japan now takes the lead among the remaining 11 nations, including Singapore, on the pact.

Yesterday, Mr. Trump said having bilateral FTAs instead of multilateral ones would benefit all, and that the TPP is “not the right answer.” He added: “We will have much bigger trade with the way we are doing it right now, and it will be a much less complex situation.”

The US leader has poured scorn on both agreements. Mr. Trump warned last month that the US may drop out of Nafta, and the Korus, belittled by Mr Trump as a “job-killing” deal, will be in his cross hairs as he visits Seoul today (Nov. 7).

Still, Dr. Watanabe thinks the disagreement on trade will have minimal impact on US-Japan ties, given how effusive Mr. Trump has been about his “extraordinary” friendship with Mr. Abe.

Mr. Trump said at a joint press conference with Mr. Abe yesterday: “There has never been such a close relationship between the leaders of our two countries. It has been great to be with you, and I will be spending a lot of time with you over the years.”