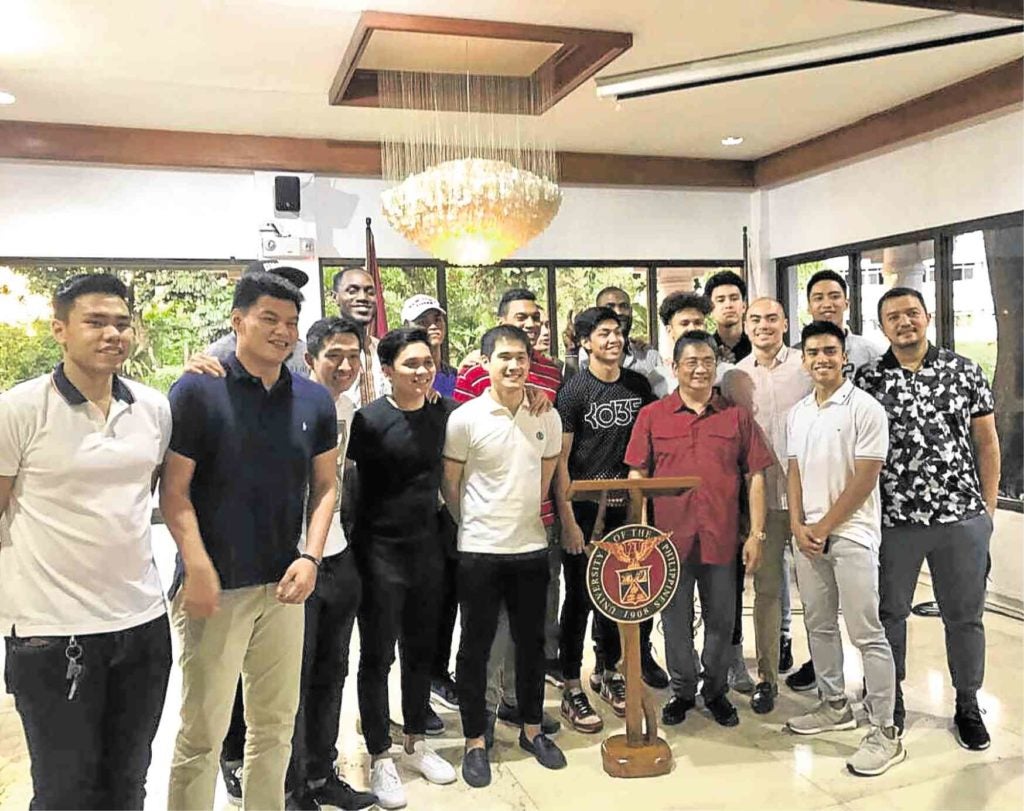 All smiles for the members of the UP men’s basketball team and coach Bo Perasol after signing a sponsorship agreement with 8990 Holdings chief Januario Jesus “JJ” Atencio for their training in Las Vegas.

Feeling like an underdog is not unusual. A lot of people must have probably felt neglected some time in their lives—that feeling when people underestimate you and they don’t see your true potential and think you are not valuable.

Yet, the process of proving them wrong is the sweetest victory that the underdogs can ever experience—enough to start a party by the bonfire.

This kind of grit is what property developer 8990 Holdings and the University of the Philippines men’s basketball team (UP Fighting Maroons) have in common. Being underdogs in their respective fields—the latter in collegiate basketball and the former in the housing industry—brought them together in this unique partnership.

Last June 24, 8990 Holdings president and chief executive Januario Jesus Gregorio “JJ” Atencio III signed a memorandum of agreement (MOA) with UP to sponsor the training of the men’s basketball team in Las Vegas in time for the upcoming University Athletic Association of the Philippines (UAAP) Season 80.

Interestingly enough, Atencio —a true-blue Atenista, but undeniably has a heart for the Maroons—agreed to sponsor the team’s training in one of the best training camps in the world. Although unwilling to disclose the specific amount, he humbly said it would cost him a few million pesos.

This is the training camp where NBA and NCAA teams in the US practice and where national teams would want to set foot in.

“This is going to be our first time to get them to go there,” Maroons coach Dolreich “Bo” Perasol said in an interview.

The training camp will be a big help for the Fighting Maroons—always the bottom dwellers in recent years. Last season, their five wins astounded many fans and alumni. From being at the bottom of the rank, the team was two wins away from making it to the final four.

8990 Holdings, on the other hand, is still considered an underdog in the housing industry in spite of its success. This is despite having been listed on the Philippine Stock Exchange in the past seven years.

8990 Holdings is currently valued by the stock market at around P35 billion. This is just a drop in the bucket compared to property blue chips like Ayala Land, which has a market capitalization of around P595 billion, or SM Prime Holdings, which is now valued by the market at close to P1 trillion. 8990 Holdings is also valued at less than half of how much Vista Land is trading for (P77 billion) or less than a third of Megaworld Corp.’s valuation of P145 billion. 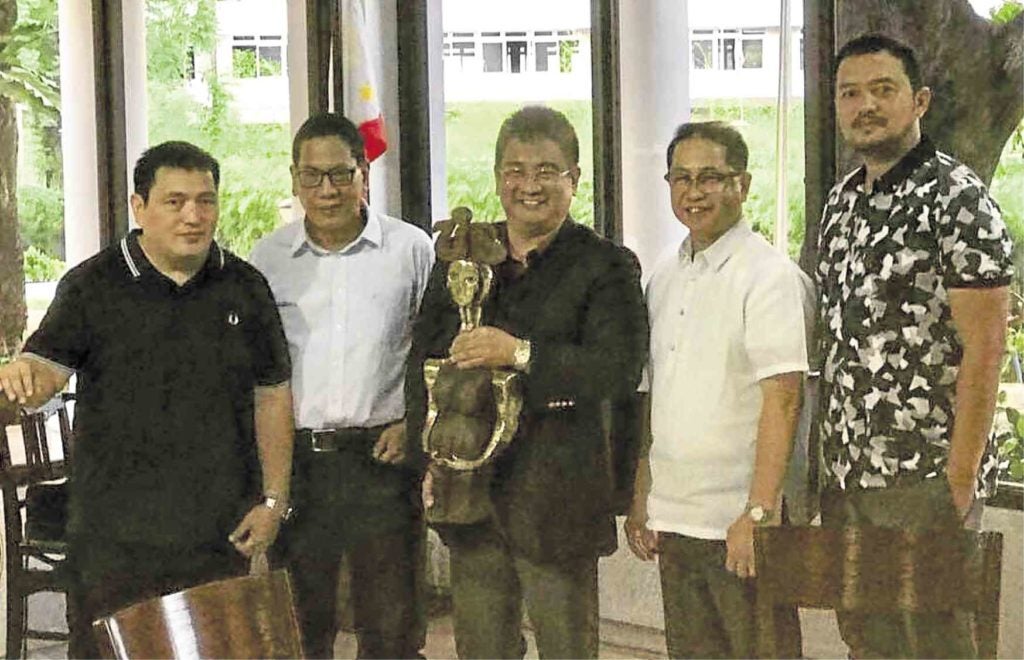 8990 Holdings President Januario Jesus Atencio (center) receives a Toym Imao sculpture as a symbol of appreciation from the UP community for sponsoring the UP men’s basketball team’s training in Las Vegas. From left: UP Fighting Maroons manager Dan Palami, Nowhere to go but UP Foundation founder Renan Dalisay, Atencio, UP President Danilo Concepcion, and Fighting Maroons coach Bo Perasol.

Not smart enough for UP?

But he can always say he has that UP connection, having taken swimming classes there when he was nine years old.

Atencio said he found out about the financial need of the Fighting Maroons from his friends, Renen Dalisay of nowheretogobutUP Foundation and veteran fund manager and entrepreneur Kevin Khoe.

“One of the things that interests me with this sponsorship is this: You are the only team in the UAAP and in the NCAA that carries the name, not only just of the school, but also of the country,” Atencio told the UP team.

Deca Homes, 8990 Holdings’ banner project offering affordable housing, was similar to the UP community, Atencio said. It’s a community where people from all walks of life are present, he said.

Atencio said the basketball team’s potential, commitment and attitude were the reasons why he would root for them.

In return, 8990 Holdings wants to encourage the team to join basketball clinics for the homeowners of Deca and become the brand ambassadors of the project.

The team members are thrilled for having the chance of training in Las Vegas. Perasol said the training would be on July 22 until August 5.

“That’s a two-week training program. The training there is three times a day, so we have two sessions in the morning and one session in the afternoon. It’s [going to be] all about basketball,” Perasol said.

The team would also get a chance to train with an expert who has helped players get drafted in the NBA. Perasol said the experience would give them that world-class edge by the time they return for the fresh season.

Players Diego Dario and Gelo Vito are also hoping for a stronger and better team after their Las Vegas stint.

“The main reason for us in going to the US is to build chemistry within the team. We feel that it’s really important coming in to the season, knowing that they’re saying that we are contenders. Everything starts with team chemistry,” Vito said.

During the off-season, the Fighting Maroons participated in the FilOil Flying V Premier Cup, which the players said helped them get their act together.

Ibrahim Ouattara, the 6-foot-9 find from the Republic of Mali, has easily adapted to the Maroons’ style, thanks to the camaraderie within the team. He showed his exceptional skills in the court and posted a 22-point, 25-rebound double-double to lead UP in the FilOil semifinals game against San Beda.

At the very least, Ouattara said the training would help them be on par with other leading teams in the UAAP.

“I think it’s a pretty good thing because for a team to really be ready on a higher level like La Salle and Ateneo, you have to be ready not only with the resources but also with the performance in the court. There is work before that. Like this preparation for example, the team going to Vegas is going to help us to be better and to perform well,” Ouattara said.

Members of the team can only thank their supporters, including 8990 Holdings.

“We’re always grateful to anyone who helps the team and we’re looking forward [to the trip]. I think that’s going to help us be more competitive this coming season,” Dario said.

It only takes one person to believe in a team like the Fighting Maroons to become more motivated in their quest for success. Atencio may have once been a stranger to the UP community, but is now one of the biggest benefactors of the underdogs in the UAAP.