PHL infra on the rise

CEMEX signs deal with CBMI to construct a new integrated production line in Antipolo City
09:00 AM May 22, 2017 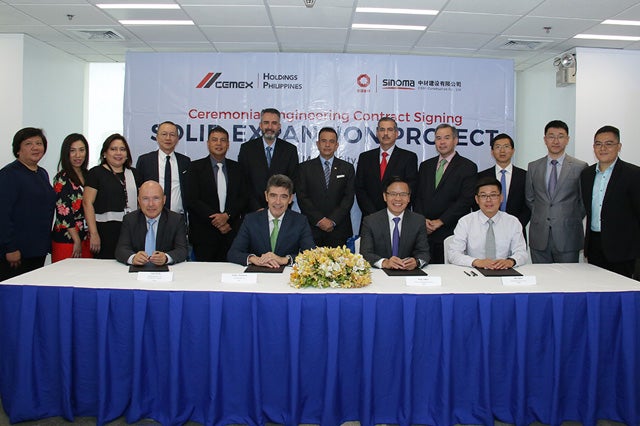 The contract signing between building materials leader CEMEX and Sinoma International Engineering Co. affiliate CBMI signals the beginning of the design and engineering works of the cement company’s multi-million dollar investment in the Philippines. The large-scale development which will take place in CEMEX’s Solid Cement Plant involves the construction of a new integrated production line that has an overall capacity of 1.5 million tons of cement.

“I am fully confident that the agreement we are signing today is our first step in realizing our investment to a sustainable future. Be assured that our end-goal here is to give the most benefit to this country and the communities surrounding Solid Cement, because it is part of what we are best at doing— we build a better future,” said CEMEX Global Operations and Technical Executive Vice President Jose Torres. 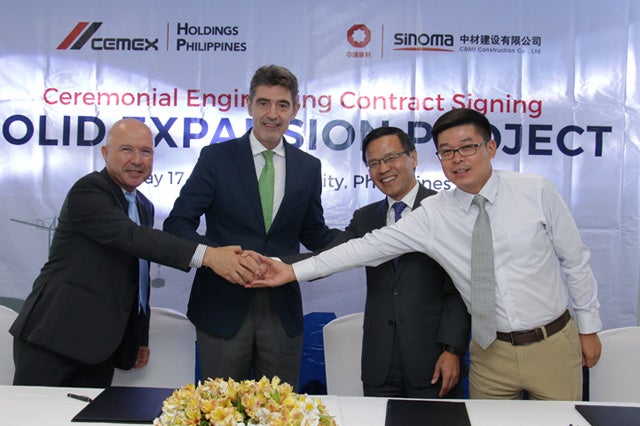 A story of growth

Department of Trade and Industry (DTI) Undersecretary for Trade and Investment Promotion Group (TIPG) Nora Terrado who was present in the event lauded CEMEX’s commitment to nation-building. Terrado added that as the country builds more roads, bridges, and other infrastructure, cement is needed. She also emphasized that it is very important that cement is manufactured and processed in the Philippines.

CEMEX’s Solid Expansion Project comes at an opportune time as the Philippines is experiencing an aggressive construction boom in the Duterte administration. The expansion will significantly support the government’s “Build, Build, Build” program that will boost big-ticket infrastructure projects in the next five years.

“It is indeed with great pride that we now boast of a bright future for the Philippines as we have had a great growth story. And making growth inclusive is our priority by increasing public spending and encouraging investments in various infrastructure projects in what we call ‘Build. Build. Build.’ This reflects the vision of the government to ensure that economic growth is sustainable and that the country will enjoy the benefits of an economy that builds and uplifts our people,” said Terrado.

Palomino shared that when the company went public last year, one of the topics was the Solid Cement expansion project. He stated that the recent ceremonial signing is the company’s way of honoring its word to its investors. “Cement is significant in our growth story. That is why we feel the importance of building capacity locally.”

“We really appreciate DTI’s efforts in promoting, engaging, and encouraging producers to set and build new capacity. The formula to create value in the country is to encourage business models that generate jobs and opportunities for the Filipino people,” added Palomino. 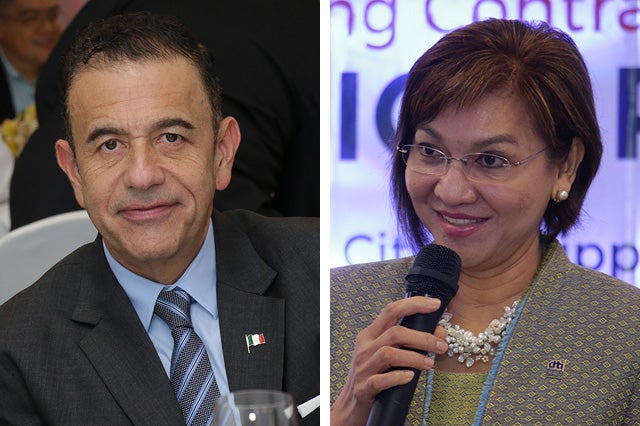 Mexican Ambassador Julio Camarena Villaseñor who also graced the event expressed his support to the initiative. “It’s a pleasure for me to witness the signing of the Solid Expansion Project. In fact, the company that actually started the investments of Mexico in the Philippines is CEMEX,” he said. “CEMEX arrived in 1997 and it has become the leading investor of Mexico in this country.”

Camarena stated that Mexico was the number one foreign investor in the Philippines in 2013 and 2014. According to him, the many investments of Mexican companies in the country have now reached an approximate amount of 6.5 billion US dollars. “Mexico is not only present today in the very active form but it was also present in the Philippines almost 500 years ago with the Manila-Acapulco galleon trade period.” Camarena reiterated the significance of history between the two countries in terms of governance, finance, trade, culture, and tradition.

CBMI Construction Chairman of the Board Tong Laigou also expressed his optimism in the project which was realized after intensive discussions on the engineering and technical parts of building the new integrated production line. 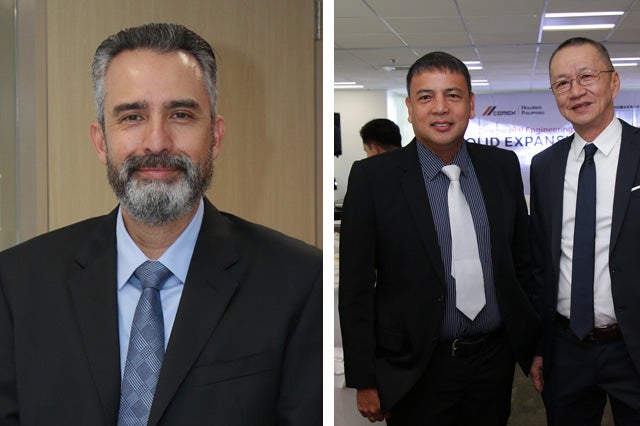 CHP is one of the leading cement producers in the Philippines, based on installed annual capacity. CHP produces and markets cement and cement products, such as ready-mix concrete and clinker, in the Philippines through direct sales using its extensive marine and land distribution network. Moreover, CHP’s cement manufacturing subsidiaries have been operating in the Philippines for over 17 years with well-established brands, such as “APO,” “Island,” and “Rizal,” each of which has a multi-decade history in the country.