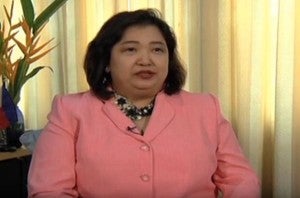 The Philippine envoy in Indonesia met recently with members of an inter-agency task force on maritime connectivity to iron out details on the maiden voyage of a roll-on/roll-off (RoRo) ship that will strengthen trade between the two countries.

Ambassador Maria Lumen Isleta and members of the Philippines and Indonesia inter-agency task force for the operalization of the Davao-General Santos RoRo met last week to prepare the shipping route that will directly link up Davao City and General Santos City with Bitung, Indonesia.

The new route is anticipated to shorten to a day-and-a-half the three to five weeks of shipping time through the Manila-Jakarta-Bitung route.

According to Isleta the opening of the route is a “more cost and time-efficient” alternative that will enhance Southeast Asian maritime connectivity and maximize the use of regional sea lanes.

“Direct shipping through the Davao-GenSan-Bitung route will take only one day and a half by ship, excluding the port stay,” she noted.

The new route is also anticipated to spur growth in the Mindanao region through joint tourism promotion, the establishment of direct linkages, and the increase in investments.

According to the Department of Transportation (DoTr) the new route would shorten the period of ferrying goods, generating savings of up to US$1,500 (approximately P75,000) per 20-foot equivalent unit for Mindanao traders.

The task force created to facilitate the creation of the Roro route is headed by the DoTr and is comprised of the Departments of Trade and Industry and Agriculture as well as their Indonesian counterparts.

The Davao-GenSan-Bitung route, which is expected to formally open in April, is among three priority ASEAN RoRo routes identified in a Japan International Cooperation Agency feasibility study on a Southeast Asian Roro shipping network. The other two RoRo routes are: Dumai-Malacca; and the Belawan-Penang-Phuket. /ATM