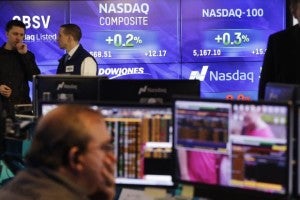 Screens for the Nasdaq Composite and Nasdaq-100 are displayed at Nasdaq, Thursday, Jan. 26, 2017, in New York. It’s been a record-making week on Wall Street. The S&P 500 index and Nasdaq composite closed at all-time highs on Tuesday and Wednesday. (Photo by MARK LENNIHAN/AP)

HONG KONG — European shares fell in early trading after a mixed day in Asia on the eve of lunar new year holidays. US futures pointed to a higher open on Wall Street.

With little in the way of market-moving events expected in Asia, investors were focusing on the latest moves by US President Donald Trump. His spokesman said the administration was considering slapping a 20 percent tax on imports from Mexico to help pay for his promised border wall, in an announcement that left markets uncertain about what it means for trade. Trump’s joint news conference with visiting British Prime Minister Theresa May scheduled for later Friday could also provide trading catalysts, especially for the pound.

“What worries me is that Mexico accounts for only around 8 percent of American’s trade deficits,” said Margaret Yang, an analyst at CMC Markets in Singapore. “Whereas US’s trade deficit with the Pacific Rim is approximately six times larger than that of Mexico. His hard stance toward Mexico could give us a hint of his future trade policies against the Pacific Rim countries, especially China.”

Fourth-quarter US economic growth estimates are due out later along with the latest round of corporate earnings. The numbers will provide fresh insight on the world’s biggest economy and help guide Fed officials as they plan further interest rate increases this year.

Markets in China, South Korea and Taiwan were closed while Malaysia was open only for the morning session. Many Asian countries have begun holidays of varying lengths, curtailing trading across much of the region. Mainland China will take the longest break, shutting down for an entire week.

Benchmark US crude oil slipped 18 cents to $53.59 a barrel in electronic trading on the New York Mercantile Exchange. The contract added $1.03, or 2 percent, to close at $53.78 a barrel on Thursday. Brent crude, used to price international oils, lost 29 cents to $56.20 a barrel in London. –Kelvin Chan