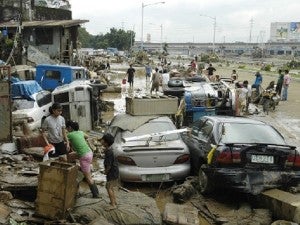 Property insurers can thank one record-breaking weather phenomena for the marked increase in the takeup of their insurance policies as well as the change in mindset of property owners.

Tropical storm “Ondoy,” which wreaked havoc over Central Luzon, including Metro Manila on Sept. 26, 2009, made business establishments and residential owners realize their vulnerability, and are now purchasing insurance for protection. This was recently revealed in the Philippine Insurers and Reinsurers Association Fact Book.

It added that major banks had started requiring “catastrophic perils cover” as part of their traditional fire policy. In the past, catastrophic covers were considered optional or add-ons, with little or no additional premiums.

The gross premiums of the nonlife industry for 2010 amounted to close to P51 billion, growing by 8.3 percent from the approximately P47 billion in 2009. This was a substantial jump from the less than one percent registered growth rate the year before. Fire and allied perils accounted for 36 percent of the total premiums received.

The premiums for fire and allied perils, which include typhoon and flood coverage, grew to P18.5 billion in 2010, an increase of 5 percent from the previous year. The country’s biggest malls and drugstores accounted for much of these covers.

Civil engineer Benito M. Pacheco, national president of the Philippine Institute of Civil Engineers Inc., observed that since Ondoy, his organization has been receiving more requests for consultations, including reviews of design criteria and actual conditions, and more requests for information about the likelihood of varying intensities or levels of flooding.

Though he lauds the ongoing physical improvement of the Pasig-Marikina River channels, he said there is still the lack of preparation not just for Ondoy-type floods, but also for the “Junior Ondoys’’ that come more often.

Pacheco also said communities have not yet fully discerned the difference between the big floods like Ondoy and the frequent inundations that they face every year.

Pacheco said flood risk management for rare events must be different from that for frequent, moderate events.

Pacheco, who is also the vice chancellor for research and development of the University of the Philippines Diliman, said the private construction industry has changed in the sense that the public is more conscious of the flood risks of particular properties or developments. “You even see a positive, commercial spin to investments on flood mitigation in the advertisements of some commercial structures,” he said.

“Even common homeowners I know put some thought and budget to reducing the potential effects of floods,” he said.

Urban planner and architect Felino “Jun” Palafox observed that buyers’ preferences had changed not only after Ondoy but also after successive major earthquakes in Haiti, New Zealand and Japan.

There has been more due diligence practiced in seeking lands not liable to flooding and away from faultlines. He also added that there has been an increased interest in the country’s urban planning, architecture and engineering to address disasters.

Manny Crisostomo, national president of the Subdivision and Housing Developers Association, said the Ondoy experience altered the way subdivisions have been planned and developed.

“Before Ondoy, engineering plans for subdivisions were done mainly just to comply with existing building codes (but) now most subdivision developers look into 50- to 100-year flooding histories of the areas they plan to develop. For existing subdivisions, mitigating measures like clearing and widening of drainage lines and adjoining waterways are being done on a regular basis, especially during the onset of the rainy season,” he said.

Willie J. Uy, Phinma Properties president and CEO, said that because of Ondoy, “there appears to be a growing preference for vertical developments, as evidenced by the more than 34-percent increase in our sales take-up.” Uy also observed that land values of properties in areas not affected by Ondoy showed slight increases, making it somewhat difficult for vertical developers such as Phinma “to negotiate on price and terms.”

He added that no Phinma residential developments were affected by Ondoy. “Even after Ondoy, there was no need for us to redesign our projects. The road elevation in our developments has always been designed to be higher than the highest recorded water level in the neighborhood.”

Read Next
No reason to be blue at Radisson Blu
EDITORS' PICK
Employers may monitor staff in work-from-home setup — NPC
Philippines’ COVID-19 cases surge to 20,626, deaths near 1,000-mark
Smart launches new LTE-Advanced Pocket WiFi Plans starting at P699 per month
COOCAA TV Bounce Back Sale offers up to 50% off
Cherry Mobile teams up with Cloud Panda PH, launches online store
LGUs must issue fare matrix to allow tricycles to operate — DILG
MOST READ
Lacson to Duque: ‘Just go’
‘Ang Probinsyano,’ other ABS-CBN programs to return as new channel set to emerge
Duterte lambasts Trillanes anew: ‘You did nothing but glorify yourself’
Philippines’ COVID-19 cases surge to 20,626, deaths near 1,000-mark
Don't miss out on the latest news and information.