Women who drive like hell, and hell for women drivers

Nothing enrages me more as a female motoring journalist than a basic right of women—that is, the right to drive—stifled. Three days ago, I read a story about a Saudi Arabian woman sentenced to 10 lashes for defying a ban on women behind the wheel. According to the news report, Shaima Ghassaniya was found guilty of driving without the Saudi government’s permission. In another report, another Saudi woman, Najalaa Harriri, also faced the cruel, business end of the whip. Her crime? For driving her children to school. 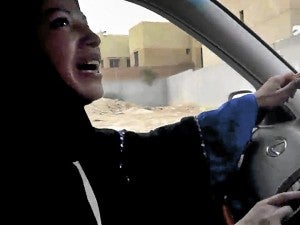 In this Friday, June 17, 2011 file image made from video released by Change.org, a Saudi Arabian woman drives a car to defy the ban on women driving in Riyadh, Saudi Arabia. A Saudi lawyer and rights advocates say authorities will bring the Saudi activist to trial. AP Photo/Change.org

My brother, who worked as an aircraft engineer in Saudi Arabia for eight years, was a witness to this absurdity. Living there with his wife and three children, they struggled every day to cope with ultraconservative religious edicts, especially the one forbidding women to drive. My sister-in-law couldn’t use the car to take her children to school, do her errands and buy groceries.

With the man of the house off to work, the mother unable to drive, and the stores miles away and an oppressive Middle Eastern sun bearing down on a desert land, many Saudi families with sons big enough to peer over the front windshield of a car did the unthinkable.

“Yes, children as young as 12 drive on Saudi roads,” my brother shared. Though he quickly clarified that it was against the law to do so, he also said that the punishment for these erring youngsters wasn’t as cruel as the ones meted to women caught driving. And though it can be said that these youngsters probably did it for the sheer pleasure and excitement of driving, it can also be argued that these acts were borne out of necessity.

Whether it was because of the stifling heat of the sun or of the government, my brother and his wife had had enough. Before the end of their eighth year, they moved out and migrated to Australia. Guess what the mom did first as soon as the family settled in. She got a driver’s license, of course.

While women like Shaima and Najalaa could only dream of taking their cars out of the garage, others live out their need for speed every chance they get. The only difference? The place they live in, and the kind of government that rules them.

I count myself fortunate to be living in a society that accepts women with equal rights to the road as the men. But as a woman relating to other women who cannot share in some experiences we already take for granted, I do not know if ignorance is bliss.

Knowing that two Saudi women about to be publicly whipped for being caught driving because their kids needed something from the store, while I test drive a Ferrari F430 in Monaco in full view of an envious public, must be the peak of irony. It only shows that humanity still has a long way to go as far as women’s rights are concerned.

I had a close brush with the “religious edict” against women several years ago. On assignment to Oman to field test a new 4×4 sport utility vehicle, I was accosted by immigration officers as soon as I alighted from the plane. After lengthy explanations of why I was driving there “without a male relative”, they finally let me off after two hours of holding us up, but not without insulting remarks relating to my gender as unable to understand the vagaries of vehicles.

Memories of Shaima and Najalaa resurfaced as I recently attended an event celebrating women racers at the posh Resorts World Manila. Tuason Racing School had launched its “racer chick edition” featuring the fastest women racers in the Philippines, and also the TRS Ford Fiesta Cup, which naturally would include women drivers to compete side by side with the men. TRS is the longest running race school in the Philippines.

Halfway around the world, women would literally have to die to do this, I thought.

We Filipino women drivers are truly fortunate. Not only because we are born with the car keys in hand (we only have to earn our way to it as we grow up), but we have the nurturing potential to excel in the sport. We are fortunate that we have competitive racers such as Daisy Jackes, a dedicated mother of three, an avid golfer, and a company director to boot. She joins the Pacific Jet Corp team with Ross Jackes, her husband, another racer.

We are fortunate we have champion karter Yvana Carangan of the Standard Insurance Car Pro team, who will be shifting professional gears from karting to circuit car racing. This coed from De La Salle University, major in American Studies, has been a regular podium placer in karting.

Make the most of this opportunity, ladies. Celebrate your freedom, and race like there was no tomorrow. And I hope that news of your conquests reaches whoever sheikh rules the lands where the sands shift. I hope they realize that Shaima and Najalaa’s time will come, and hell hath no fury like a woman deprived of her joy ride.