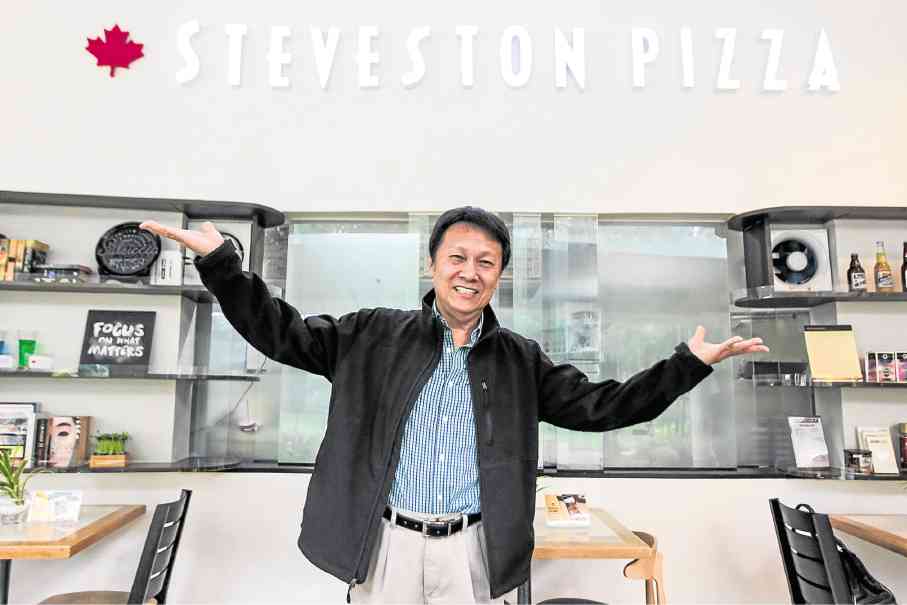 Starting with only two branches in UP Town Center and Corinthian Gardens, both in Quezon City, pizza restaurant Steveston Pizza is most likely an unknown brand among diners, despite being around for the past three to four years.

Not that it bothers Richard Go, the Canada-based restaurant’s licensee and Steveston Pizza Philippines CEO, since their target market are really the “high-end” customers.

“We try to have that ‘aura.’ [When we put up] Corinthian Gardens, people were asking me, are you serious? That’s an exclusive village. People can’t just go in,” says Go. “I said, yes, because we ran the numbers: there are 600 houses, and if each household has five members, we have 3,000 potential customers. I only need 30 people to walk in every day; but in fact, we have almost 100 every day. So [we hit the] bullseye. This is the product, this is the target market.”

It’s a criterion he strictly follows now that he has decided to open Steveston to franchisers both in the Philippines and in Asia. The expansion comes after a series of “mistakes” Go made as he struggled to establish the business here.

“Steveston was not actually mine to run,” says the former owner of Cheesecake, etc. “After I sold [Cheesecake, etc.], I retired. But I still sit as director of other companies. And  in one of our meetings with a certain company, we talked about diversifying our business because it was going south. One of the directors then said, if you’re interested in Steveston Pizza, I can bring it in.”

Because of his knowledge of the local food industry, Go says he was asked by his colleagues to come up with a business plan for the restaurant’s local license, which he agreed to do.

“So I said yes, which got the ball rolling—and in hindsight I think maybe that was a mistake, as the problem fell onto my lap,” he says. “Mistake No. 2: I said, I’m going to visit Canada, do you want me to bring this business plan so I can present it there?”

“[Hatami] is an artist. I saw how he made his pizza: he’d put in the ingredients, step back, and take a look at it. If he feels there’s too much of something, he’ll take it out; if he likes you, he’ll put in more. He does it all with flair, too,” says Go.

Go had asked Hatami to review the proposal and contact him for feedback, but the call never came. Instead, Go found out that Hatami came here to see for himself how local operations would be conducted.

“His visit was a bit of a disappointment because he sort of preempted [the business plan]. There was no adequate supply of ingredients. He was not happy, so the project was actually [a failure],” Go says. “So one of [my] partners said, why don’t you take over, since you have background in the food industry? Because otherwise, nothing will happen with this project.”

“So I said, yes—mistake No. 3!” he says. Despite the challenges, Go persevered and met again with Hatami to discuss his plans as Steveston Pizza Philippines CEO.

“At first there was a bit of resistance. I went to him and said, OK, I’m the guy you talk to now, not my partners. But eventually—finally—he did,” says Go. “I told him, as far as the culinary side is concerned, that’s all you; but as far as the business in the Philippines is concerned, what I say goes.”

And what Go did for Steveston Pizza Philippines was to create a system that would work for a restaurant chain, unlike Hatami’s small-scale operations in Canada (Hatami only has one store).

“That’s our contribution to [the Steveston brand]: We were the ones who set up the formulas, measurements, using [Hatami’s] recipes,” says Go.

As the business grows, Go says he “feels that we shouldn’t do this alone”; hence the decision to open it to franchisers. Go is already in talks with businessmen from Brunei, Indonesia and Singapore who are interested in the brand.

“We think we can collaborate with partners who also have their own strengths [in running a restaurant],” says Go. Locally, he says he’s looking at least four “strong players” across the country so that Steveston will be present in major cities in all three island groups.

Despite the obvious competition posed by more well-known and established pizza chains in the country, Go believes Steveston Pizza Philippines will still make it big in the country and, eventually, in Asia because of three simple strategies: by using only fresh and high-quality ingredients to create their products; by strictly following the  guidelines set forth their principal when it comes to preparing the pizzas; and by building up the restaurant as a “go-to destination.”

“Because it’s actually only seven minutes away from where I live in Canada, I patronize [Steveston’s] products and I know what the Hatami is capable of,” says Go. “I believe the restaurant has great potential here in the Philippines.”