Global stocks uninspired as focus turns towards US jobs data 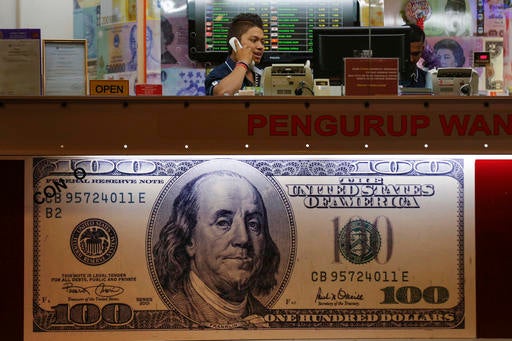 A currency trader talks on the phone at currency exchange store in Kuala Lumpur, Malaysia Thursday, Jan. 5, 2017. The Malaysian ringgit was trading near 18-year lows on Thursday, dropping to its weakest level against the U.S. dollar since June 1999. Analysts expect the ringgit to weaken further due to weaker growth in China, Malaysia’s biggest export market. AP

LONDON — Global stock markets traded in fairly narrow ranges Thursday as the attention in markets shifted towards upcoming U.S. jobs data following the publication of the minutes to the Federal Reserve’s last board meeting.

FED MINUTES: U.S. central bank officials think they may need to accelerate interest rate hikes if a faster-growing economy leads to lower than expected unemployment. For now they believe they can stick to gradual increases, according to minutes of the Fed’s December meeting. Officials also discussed the impact of Donald Trump’s proposed economic stimulus program and attributed surging stock prices, rising bond rates and the stronger dollar following the election to investor enthusiasm over the president elect’s plans.

JUST THE PRECURSOR: The minutes were just a taster for the likely big economic event of the week — Friday’s publication of the nonfarm payrolls report for December. Though the upcoming moves by the incoming Trump administration are likely to have an impact on Fed rate hike predictions, the backdrop is likely to remain that the U.S. economy is growing strongly with unemployment falling steadily. Later Thursday, traders will have the monthly non-manufacturing survey from the Institute for Supply Management to digest.

ANALYST TAKE: “Given the uncertainties that lie ahead though, I expect it will be another volatile year in which expectations for interest rates will change on a regular basis,” said Craig Erlam, senior market analyst at OANDA.

UPBEAT ASIA: Solid figures out of China and Hong Kong raised investor optimism about the outlook for their economies. Caixin’s monthly purchasing managers index, or PMI, for the services industry posted its biggest rise in activity for 17 months in December. The Nikkei composite PMI for Hong Kong, meanwhile, showed that activity expanded for the first time since February 2015.