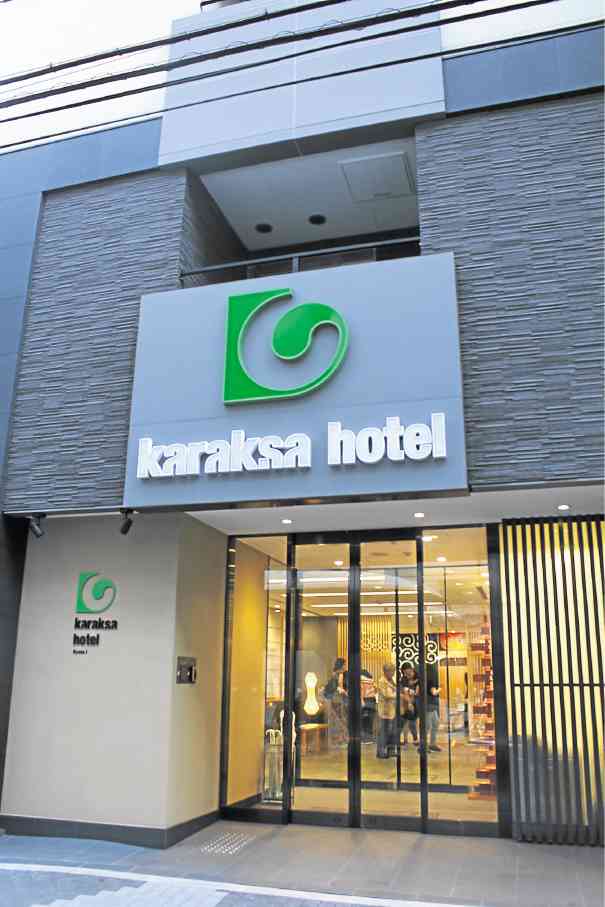 Facade of the Karaksa Hotel in Kyoto, one of two hotels under a partnership between Japan’s Xymax Corp. and Robinsons Land Corp.

This time, it’s a Filipino firm that showed the way for the Japanese.

While the Philippines often takes its cue from its more advanced neighbor in terms of business and technology, a local hotel chain has inspired a Japanese corporation to build its own, tailor-made for the Southeast Asian market.

Xymax Corp., among Japan’s leading real estate, property and chain store management firms, has partnered with Robinson’s Land Corp. for the design and marketing of its new Karaksa Hotel chain, a mid-range hotel that specifically targets Filipinos and other Southeast Asian tourists.

“We found Go Hotels a very impressive hotel for us. We also have the same sort of idea that current hotels are sometimes too much,” said Ryuhei Mori, General Manager of Corporate Planning and Overseas Business Department chief at Xymax.

“In Go Hotels, there’s a minimal hotel style. So we really got a good inspiration from Go Hotels. We sent our hotel designer to discuss, get some good ideas, hints,” he said in a briefing with Filipino reporters invited to experience a Karaksa Hotel stay last month.

The partnership traces its beginnings to a business conference in Hong Kong in 2014, when a Xymax staffer came across representatives from the Filipino corporation.

“And they discussed, and they found some similarities between Robinsons Land and Xymax Corp.,” Mori said.

Mori and other Xymax representatives then traveled to the Philippines to formalize the partnership and see Go Hotels, Robinsons’ affordable hotel brand now in 11 locations in the Philippines.

“This is our first partnership … We are very strong in the domestic market, so they (Filipino tourists) can easily book now for Japan. The main purpose is to expand offerings we give to Filipinos,” said Elizabeth Gregorio, RLC General Manager for Robinsons Hotels and Resorts.

Go Hotels offers the cheapest rates for Karaksa rooms on its website (www.gohotels.ph), and Philippine-based tourists scouting for accommodations would find Karaksa’s first two hotels in Osaka and Kyoto on the list of locations.

“Filipinos might find it pricey at first, but considering the destination, it is very reasonable. It comes with breakfast, it is close to the shopping and eating areas,” Gregorio said.

The offering in a way completes travel options that Filipinos may book on Gokongwei-led firms, with its airline Cebu Pacific regularly flying to Osaka.

For one, Xymax patterned the design of its hotels after Go Hotels’ minimalist yet functional approach: No single rooms, adjoining units for family bookings, separate toilet and bath to maximize utility, and space-efficient implements such as a raised bed to give space for luggage.

The result: A combination of Japanese minimalist modern design and Filipino functional elegance.

The Karaksa Hotel, named after a Chinese vine pattern that symbolizes “prosperity, longevity, growth and linkage,” wanted to fill a gap in the Japanese hotel industry, which lacks rooms for an increasing number of visitors from the neighboring region.

“The growth in tourist arrivals is really getting high.  Aside from the Chinese and Korean markets, the Southeast Asian market is rapidly increasing,” said Karen Barretto, business development officer at Xymax.

Data from the Japan National Tourism Organization showed a 30-percent increase in Filipino tourists year-on-year, as of February. The rest of Southeast Asia also showed a rapid rise in visits to Japan, from Singapore’s 25 percent to Vietnam’s unprecedented increase of more than 80 percent, owing to relaxed visa rules.

When it opened on March 18, the Karaksa Hotel got its baptism from Filipino guests, amid jitters on how clients would respond to its facilities and services.

But the debut proved to be a happy beginning: The six tour groups from the Philippines, most of them families, felt right at home at the hotel designed with the Southeast Asian traveler in mind, Barretto said.

“We were so proud that Filipinos were our first guests,” she added.

“Before we opened, [travel agencies] started selling for the March tours. So by the time [we opened], we had six Filipino groups, and they were very happy because the hotel is designed for Filipinos, we have Filipino staff, and everything is comfortable for Southeast Asians,” said Barretto.