Crab-cracking in the heart of QC 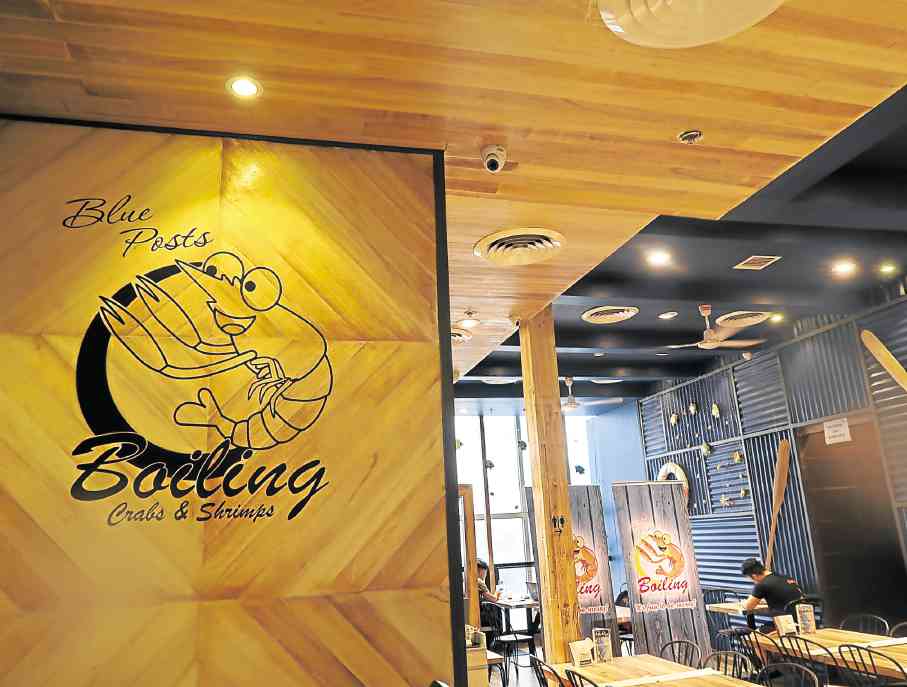 What Blue Posts Boiling Crab and Shrimp lacks in size, it tries to make up for in taste.

I am told I do not write about enough restaurants in Quezon City. So here is one that you can take your family and extended family to on a lazy—or hectic—Christmas shopping day.

It is a very casual mall restaurant—a crab and shrimp shack, actually. But the food, if you are willing to eat sans spoon and fork, is first class in flavor.

The name of the shack is Blue Posts Boiling Crab and Shrimp. Inspired by the shrimp shacks in the United States, the owners first set up Blue Posts (originally Blue Post Bar and Billiards) in Bajada in Davao.

When the children of Marie Tes Lee of The Deli at Shaw Boulevard ate in Blue Posts in Davao, they loved it so much they wanted to bring the concept to Manila.

Enterprising as they are, the five kids—Angelie, Glen, Roseanne, Patricia and Kaitrina—unbeknownst to their parents, set up their own corporation for a franchise of Blue Posts.

And this 2016, after a lot of hard work, they opened Blue Post Boiling Crab and Shrimp in SM North. Their parents apparently instilled a really good work ethic in their children because Glen is at the restaurant every day and Patricia takes care of sourcing.

A few caveats before I wax poetic on the crabs: First, you have to be willing to brave Edsa because the restaurant is located in SM North. I confess that it was my first time inside SM North (and I was happily surprised at what a fine mall it has become) when I went to Blue Posts Boiling Crab. For those who live in the area, lucky you.

Second, you have to be willing to eat with your hands. They do provide disposable gloves but there is no other way to eat those crabs. You need to hammer on them, ply them open and literally eat the fruits of your labor.

What you get though is a really good meal. You can literally stuff yourself silly with crabs. 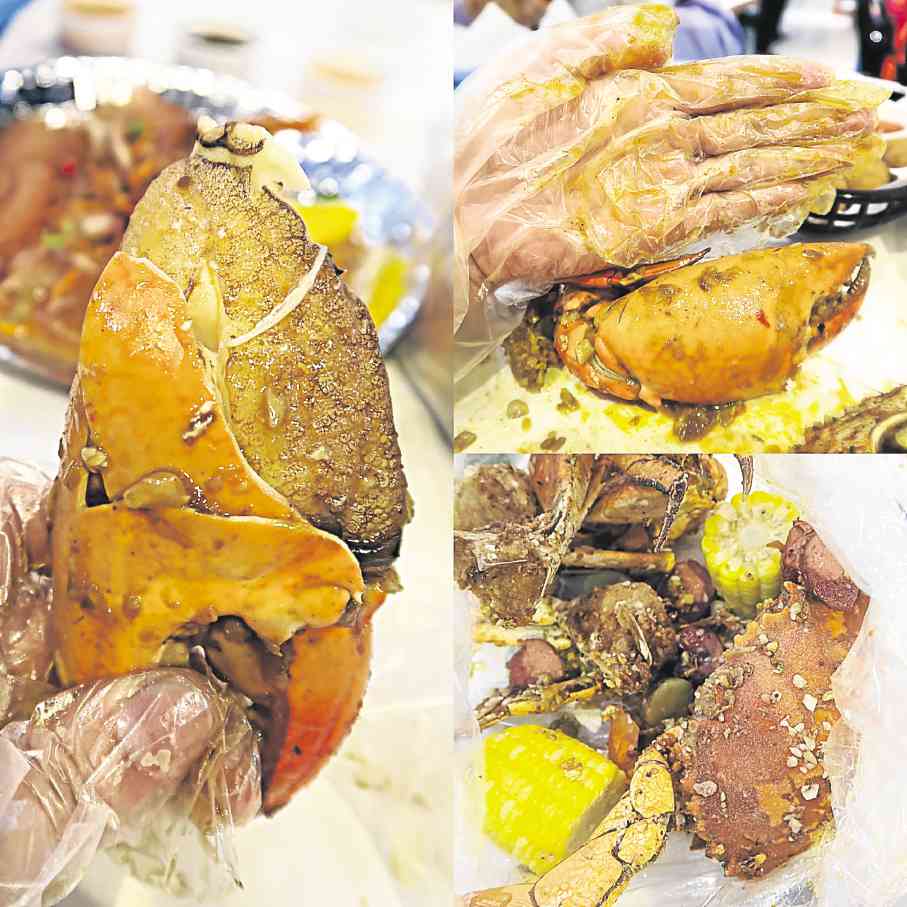 The crabs are flown in fresh from Davao every day, not every other day, not every week, but every single day. As with some Chinese restaurants, the crabs are first presented to you alive and you choose which among the lucky crustaceans get to die for you.

Then you can choose which flavors you want with your crabs: Cajun, garlic or sambal. My personal favorite is sambal because I love the flavors of Asian spices. If you don’t like spicy, I highly recommend the garlic. If you are in the mood for some New Orleans, by all means, go for Cajun.

The crabs are presented in a big transparent plastic bag where it is mixed with the sauce, plus sausages and corn. After cracking the shells open, you have the option to eat on a plate or you can also opt, as we did, to just grab the crabs direct from the table. It’s a lot of fun. I poured out the day’s angst on the chopping board and got rewarded with hefty meat from big claws.

If you are not a crab lover, they also have Cajun prawns—King prawns marinated in a Cajun spice sauce then grilled. There is also sambal shrimp. It’s the same concept but using Vannamei or Pacific White Shrimp, a variety that is often compared to suahe because of its sweetness albeit bigger in size.

Chef Jun, who is behind the menu, is now working on a salted egg shrimp dish as well as a durian paste. He says that since their roots are in Davao, he would like to expose more the flavors of Davao such as pomelo and durian.

If you are not in the mood to get all dirty with the crab, fear not. You can order a crab and shrimp roll or a crab chowder or spicy gumbo soup (I tell you, though, that is a far cry from eating fresh crab).

If you are sadly allergic to crab and shrimp, do not worry, they also have grilled tuna belly and tuna panga (jaw).

If you want to be really boring (what’s the point of going to Boiling Crab and Shrimp if you don’t eat crab and shrimp, right?), they also have adobo, pork belly and battered chicken.

This trip, an excursion trip to the north for me, was really worth the drive. They are opening another branch in Mall of Asia before the year ends. I hope they open another one in Makati soon.

Read Next
#BetterWorld: The Aboitiz way
EDITORS' PICK
KZ Tandingan taking it one step at a time
Pacquiao camp says McGregor fight being considered
Water remains our saving grace right now
The power of two: Renewable energy and natural gas are the cleaner, better combination
As campaign heats up, Trump woos Latino, Black voters
SMC applying sustainable measures vs geohazards in Bulacan airport site — Ramong Ang
MOST READ
12 provincial bus routes in Central Luzon, Calabarzon to open Sept. 30 – LTFRB
Even without corruption, Manila Bay rehab is not OK during pandemic – Robredo
Has Duterte done any good? Robredo says yes, but he missed out on many things
Imee Marcos agrees with Ombudsman: SALN ‘weaponized’ to ‘terrorize’ gov’t execs
Don't miss out on the latest news and information.