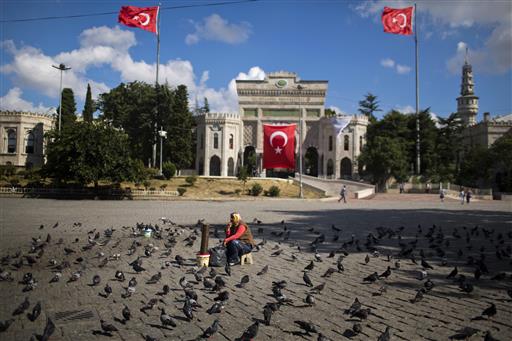 A woman waits for customers to sell food for pigeons outside the Istanbul University Tuesday, July 19, 2016. Turkey’s state-run news agency says courts have ordered 85 generals and admirals jailed pending trial over their roles in a botched coup attempt. Dozens of others were still being questioned. AP

In a statement, the bank’s Monetary Policy Committee said it had reduced its overnight marginal funding rate by a quarter percentage point to 8.75 percent. All other rates were left unchanged.

The move would help banks borrow more cheaply from day to day, which could help ease liquidity restraints that emerge in the financial system at a time of heightened uncertainty.

The central bank’s rate-setting body didn’t mention the coup directly but said that “domestic developments have led to fluctuations in financial markets.”

“Market developments will be closely monitored and the necessary liquidity measures will continue to be taken to support financial stability,” it said.

The panel sought to downplay worries about the economic outlook, arguing that recent policy and liquidity measures “have increased the resilience of the economy against shocks.”

Some economists had expected an even bigger reduction in the marginal interest rate of half a percentage point, in line with the central bank’s last three cuts. The more modest reduction may point to some concern about the impact on the Turkish lira, which has fallen sharply since the coup attempt and could be weakened further by lower interest rates.

There’s been a lot of volatility in Turkish financial assets since the coup. Turkish stocks are still way down from pre-coup levels as is the Turkish lira. The currency fell further Tuesday against the dollar, which was up another 1.6 percent at 3.03 lira. Before the coup, it was trading at 2.89.

The attempted coup and the subsequent tough response by the government have reinforced concerns over the toxic political divisions in Turkey.

A major worry is that international investors, who are badly needed for Turkey to meet its external financial obligations, will take fright and adopt a more cautious approach that further dents the Turkish lira.

The same applies to those planning to holiday in Turkey — tourism is a key sector and foreign-currency earner for Turkey. Tourist numbers this year, particularly from Europe, were already before the attempted coup expected to be sharply lower as a result of a series of attacks in the country over the past few months.

William Jackson, senior emerging markets economist at Capital Economics, said the overall tenor of the central bank’s statement suggests that it is “pretty unfazed” by the political turmoil and that further cuts seem likely in the coming months.

However, he voiced his concern about how sustainable it is to keep cutting rates at this pace, especially as rising political risk turns off international investors. Lower interest rates could translate into weaker returns for foreigners investing in Turkey. If they are scared off, that could push the lira down further.

“The context here is that Turkey has a large current account deficit, so tighter external financing conditions would put the lira under pressure and cause inflation to rise,” he said.

Before the attempted coup, most economic forecasters had penciled in Turkish economic growth of around 4 percent this year.

Fitch and Moody’s Investors Services have already warned about the possibility of downgrading their ratings on Turkey in light of the attempted coup. Moody’s said there’s now a “likelihood of a weakening in medium term growth prospects” and that it will “be assessing the impact of the failed coup on institutional strength.”

One concern consistently highlighted since the coup fell apart is that President Erdogan will push ahead with long-held plans to amend the constitution to centralize power further for himself, and undermine respect for the rule of law. Both are central to the proper-functioning of a market economy.

“Turkey continues to operate in a fragile financial and geopolitical environment and its external vulnerability is rising, implying the rising possibility of an escalation in capital outflows, a more rapid fall in reserves and, in a worst-case scenario, a balance of payments crisis,” Moody’s warned as it put the country on notice that its Baa3 rating could be cut.