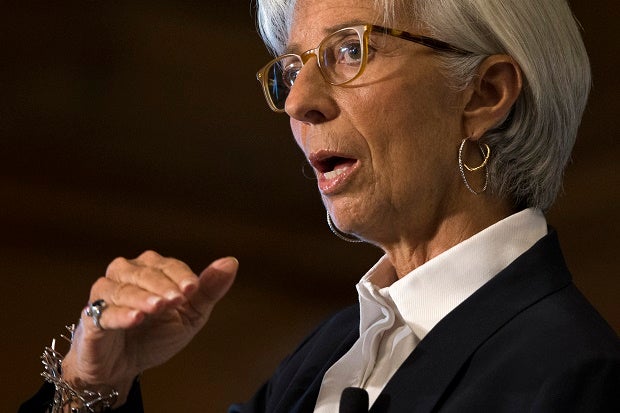 Asia’s economy has grown by about 6 percent a year over the last 25 years but the rising income inequality has raised concerns about inclusive growth.

To distribute the dividends of increased prosperity, experts at a high-level conference in New Delhi on Saturday (March 12) emphasized efforts to ensure access for the poor to education, health and finance.

“Asia has done a lot, and yet, there is still a lot to do,” said Christine Lagarde, managing director of the International Monetary Fund, at the launch of a three-day conference: ‘Advancing Asia: Investing for the Future’.

The IMF and the Indian government hosted the conference at Taj Palace in the Indian capital, attended by senior officials, corporate executives, academics and civil society representatives from more than 30 Asian countries.

The Daily Star is a media partner of the event.

Narendra Modi, prime minister of India, delivered the keynote speech in the opening session, where an initiative to establish the South Asia Regional Training and Technical Assistance Centre or SARTTAC was unveiled.

India along with Bangladesh, Bhutan, Maldives, Nepal, Sri Lanka and the IMF have agreed to set up the center, which will help enhance skills and the capacity of public sector officials.

In her speech, Lagarde lauded Asia’s economic progress and advancement in various areas including poverty reduction and improvement in the living standards.

Asia is the world’s most dynamic region and today accounts for 40 percent of the global economy, she said.

Over the next four years, even with slightly declining momentum, it stands to deliver nearly two-thirds of global growth.

Despite the progress, income inequality has crept up in 15 of the 22 Asian economies, Lagarde said, referring to a recent IMF working paper.

Asia remains home to two-thirds of the world’s poor, many of whom live in India. In most of the region, women and youth are still greatly underrepresented in the labor market.

However, these concerns can be opportunities, Lagarde said.

“What if income inequality could be reversed, poverty further reduced, and women and young people economically empowered? What if growth could be made more inclusive and sustainable? What if Asia’s 4.4 billion people could each realize their full potential?”

“We can imagine the possibilities. The question is how to realize them,” she said, while suggesting for broadening access to services like health and finance, and targeting social spending on the neediest.

“Multilateral trade liberalization has the potential to be globally welfare-enhancing. If, however, progress at that level remains slow, comprehensive regional trade agreements can help to lower tariff and non-tariff barriers and incorporate new areas like services.”

Lagarde also called for policymakers of the region to respond to the challenges the global economy faces.

She recommended supportive monetary policy and growth-friendly fiscal measures to safeguard financial stability, and above all, structural reforms to boost competitiveness, growth and jobs.

Successfully dealing with these kinds of structural issues will not only support Asia’s near- and medium-term prospects but also secure the foundations on which to unlock the region’s exciting future potential, Lagarde added.

In his speech, Indian Premier Modi said his dream is of a Transformed India.

“I lay this dream alongside our common dream of an Advanced Asia — an Asia where more than half of the global population can live with happiness and fulfilment.”

“Our joint heritage and mutual respect, our common goals and similar policies, can and must create sustainable growth and shared prosperity.”

He said many knowledgeable people have said the 21st century is, and will be, the Asian century.

Asia, where three out of every five people in the world live, is distinct in many ways, according to the Indian prime minister.

“Asian families tend naturally to save more than people in other parts of the world. Thus, they invest for the future,” he said, while referring to the theme of the conference.

Social stability built on strong family values is another feature of Asia’s development.

Asians tend to leave things behind for the next generation, he said, adding that economists have commended on the saving ethic of Asian countries.

Modi also touched upon the issue of reform of global institutions.

Reforms of global institutions have to be an ongoing process and must reflect the changes in the global economy and the rising share of emerging economies.

“Even now, the IMF quotas do not reflect the global economic realities. Change in quotas is not an issue of increasing the power of certain countries. It is an issue of fairness and legitimacy. The belief that quotas can be changed, is essential for the fairness of the system.”

For poor nations to respect the legitimacy of such institutions, they must be able to aspire and to hope, he said, adding that he was happy that the IMF has decided to finalise the next round of quota changes by October 2017.

She also advised on investing in the health sector as one dollar of investment in health gives returns of $9.

The center, which will be based in the Indian capital, will provide training to government and public sector employees.

It will enhance their skills and improve the quality of their policy inputs. It will also provide technical assistance to governments and public institutions, said Modi.

“This will be the first centre that fully integrates training and technical assistance and is a model for our future capacity development work,” Lagarde said.

It is expected to become the focal point for planning, coordinating and implementing the IMF’s capacity development activities in the region on a wide range of areas, including macroeconomic and fiscal management, monetary operations, financial sector regulation and supervision and macroeconomic statistics.

The center will also help address the existing training needs and respond to the demands for IMF training in India, Bangladesh, Bhutan, Maldives, Nepal and Sri Lanka.

“It is the beginning of a good initiative. We will be the beneficiaries of the center,” said Bangladesh Bank Governor Atiur Rahman, who was present at the program.

The center will offer courses and seminars for policymakers and other government agencies from the six countries, according to the IMF.

It will build upon the IMF’s experience with capacity development by drawing on the experiences of the IMF’s Regional Technical Assistance Centers and Regional Training Centres, which have a proven track record of delivering technical assistance on economic institution building.

Funding will come from contributions by regional member countries and development partners.

The Australian Agency for International Development, the Republic of Korea and India pledged financial support for the center, it added.