Battle of the Lawyers on RCBC probe 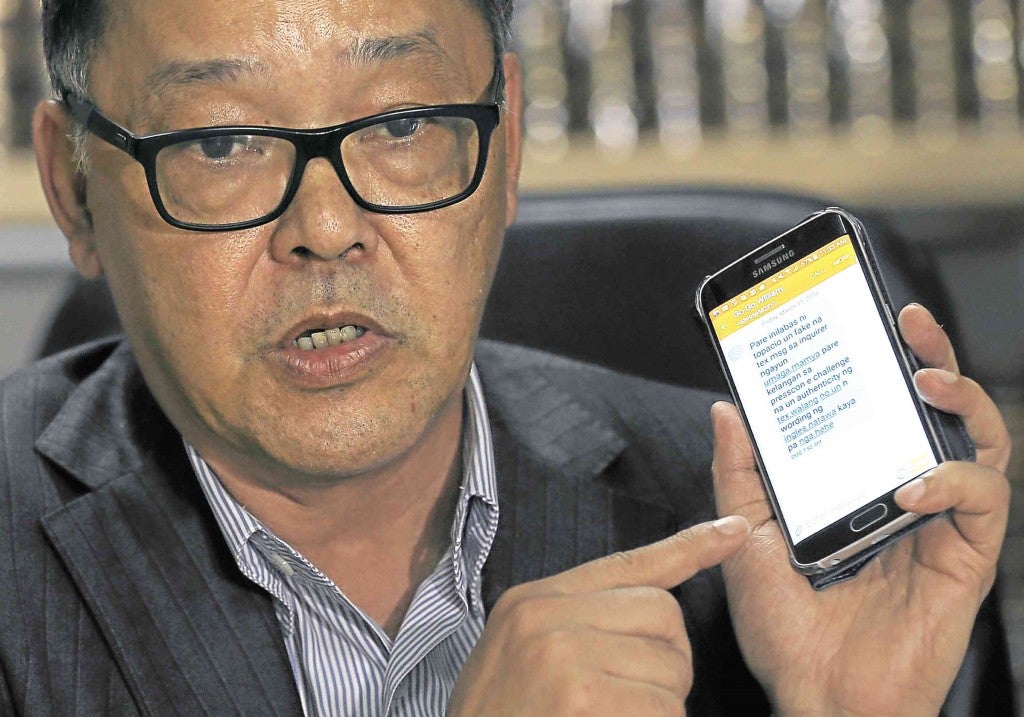 BATTLE OF LAWYERS Ramon Esguerra shows a text message of his client William Go in Makati City on Friday. At right, Ferdie Topacio says Maia Santos-Deguito will explain her side at the proper time and venue. RAFFY LERMA

WHILE authorities piece together clues on the $81 million dirty money that slipped through the Rizal Commercial Banking Corp. (RCBC) Jupiter branch in Makati, the legal counsels for the bank’s chief executive officer (CEO) and the branch manager traded barbs on the integrity of the bank’s internal investigation.

Ferdinand Topacio – legal counsel for Maia Santos-Deguito, the RCBC Jupiter branch manager who was the gatekeeper of the suspicious bank accounts involved in the cross-border money laundering scheme – questioned RCBC’s ability to come up with a fair investigation if RCBC president Lorenzo Tan remained active on day-to-day operations.

Francis Lim, the legal counsel for RCBC president, said on Sunday that the bank was handling this issue “professionally and employing best practices.” Lim also underscored an apparent change in stance by Deguito, who said in a radio interview on Friday that she was “not accusing” Tan but had only “assumed” that he knew about the transactions – contradicting earlier allegations that the bank CEO himself had given instructions to accommodate the transactions.

“Our client, Ms. Maia Santos-Deguito views with alarm and suspicion the failure of RCBC to impose appropriate measures against RCBC president Lorenzo Tan pending the investigation of the alleged $81 million money laundering incident,” Topacio said in a press statement.

Topacio said if RCBC were serious in uncovering the truth regarding the alleged money laundering – and not preparing for a widespread cover-up and setting up Deguito as the “fall guy” – the bank should immediately suspend Tan and reassign the investigation to another bank officer with no links to Tan’s lawyers.”

On Friday, Lim said the RCBC president had offered to go on leave to give the bank a “free hand” in investigating the alleged money laundering issue involving its Jupiter branch in Makati and its branch manager. “The bank’s board thanked him for his gentlemanly and decent gesture but said their trust in him is intact and unshaken,” Lim said.

“In light of the recent pronouncements of Mr. William Go in media and the apparently orchestrated media blitz of RCBC management which is conditioning the mind of the public against Ms. Santos-Deguito, it is most unfair for Mr. Tan to continue serving as bank president, where he is in a position to delete and/or tamper with bank records, emails and other documents and forms of communication, as well as influence and intimidate possible witnesses, considering that he is under a cloud of suspicion. It is also strange that RCBC has vouched for Mr. Tan’s supposed ‘integrity’ even while the internal investigation is still pending,” Topacio said.

Go is the businessman who accused Deguito of faking his signatures to open the US dollar deposit account with RCBC that was used to consolidate proceeds from four other bank accounts to which the $81 million money stolen by hackers from the US account of Bank of Bangladesh was wired by the Federal Reserve Bank of New York. He was among the six individuals that the Anti-Money Laundering Council has identified as among the potential conspirators to the $81-million money laundering scheme. His accounts as well as those of his company Centurytex Trading were ordered frozen by the Court of Appeals on March 1. Through a lawyer, he has vehemently denied involvement and instead pointed to Deguito as the culprit.

“We also view with great suspicion the fact that Mr. Tan is represented in the investigation by the ACCRA (Angara Abello Concepcion Regala & Cruz Law Offices Law Office) when the one conducting the investigation on behalf of RCBC, Atty. Macel Fernandez, used to be connected with ACCRA,” Topacio said.

“His allegations regarding Accra and Atty. Macel Fernandez are way off,” Lim said in a rejoinder.

Lim said the board committee investigating the matter was composed of members representing the major stockholders, adding that Fernandez was not part of it. The committee is being assisted by SGV auditors and external lawyers from another law firm,  the Poblador Bautista Reyes – not ACCRA, Lim said.

“So instead of asking RCBC to sanction Mr. Tan, Atty Topacio should instead assist his client to explain the accusation of Mr. William Go that she opened an account in her branch without his knowledge, used this account for deposit and withdrawal without his knowledge, and identify who forged Mr. Go’s signature to withdraw money,” Lim said.

“He should also busy himself explaining why she attempted to fly to Japan last Friday which has been perceived as flight and therefore an implied admission of guilt,” Lim said.

“We condemn in the strongest terms possible the blatant violation of the Constitutional and Human Rights of our client, Ms. Maia Santos-Deguito, perpetrated by the Department of Justice (DOJ) and the Bureau of Immigration (BID), in forcibly offloading her, her husband and 10-year old son from a plane at the last minute that it was about to leave for Japan. The family was on its way to Tokyo Disneyland as a birthday and Lenten gift for Mrs. Santos-Deguito’s child,” Topacio said in another statement.

“The heavy-handed manner by which the offloading was done, which would not be out of place in a police state such as North Korea, has traumatized not only Ms. Santos-Deguito and her husband, but worse, her child of tender years, who kept crying throughout the ordeal and even all the way back home, as he could not, in his young mind, understand why his plane going to Disneyland left without him,” he said.

Topacio said he was able to talk to the immigration officers who had executed what he called as a “monstrosity” against Deguito, alleging these people were not aware of any bases for preventing his client from leaving.

The are no cases filed against Deguito and no hold-departure orders, the lawyer said.

Deguito is among those summoned to the hearing to be conducted by the Senate blue ribbon committee.

“I also talked to acting Commissioner Roni Geron, who admitted to me that he hastily issued a last-minute ‘lookout order’ and I apprised him of the fact that in the case of Arroyo versus Secretary of Justice, where I am also a legal counsel, the Supreme Court no less has issued a restraining order preventing the DOJ (Department of Justice) and BID (Bureau of Immigration and Deportation) from implementing such ‘lookout order.’ Geron admitted to me that there are no cases and no hold-departure order against my client. Although he is also a lawyer, I discussed with him the legal ramifications of the BID’s actions,” Topacio said.

Topacio threatened to sue Acting Justice Secretary Emmanuel Caparas, Acting Immigration Commissioner Roni Geron and the immigration officers who offloaded Deguito before the Ombudsman (for graft), the Civil Service Commission, the Commission on Human Rights, the Supreme Court (for contempt and disbarment) and the ordinary courts (for damages and child abuse).

“Such brazen disregard of the fundamental rights of my client has no place in a civilized and democratic society. What is scary is that there seems to be a pattern of such transgressions of Constitutional rights being continuously done by the BID in other cases. Therefore, we shall be constrained to file the necessary charges against these officials who show no hesitation of running roughshod over people’s rights should be taught a lesson: while they think that under the present administration their evil actions may be tolerated and even abetted, the cases taking them to task for their misdeeds will long outlive the present government and justice will be attained under a new dispensation.”