Celebrating cuisine with a conscience 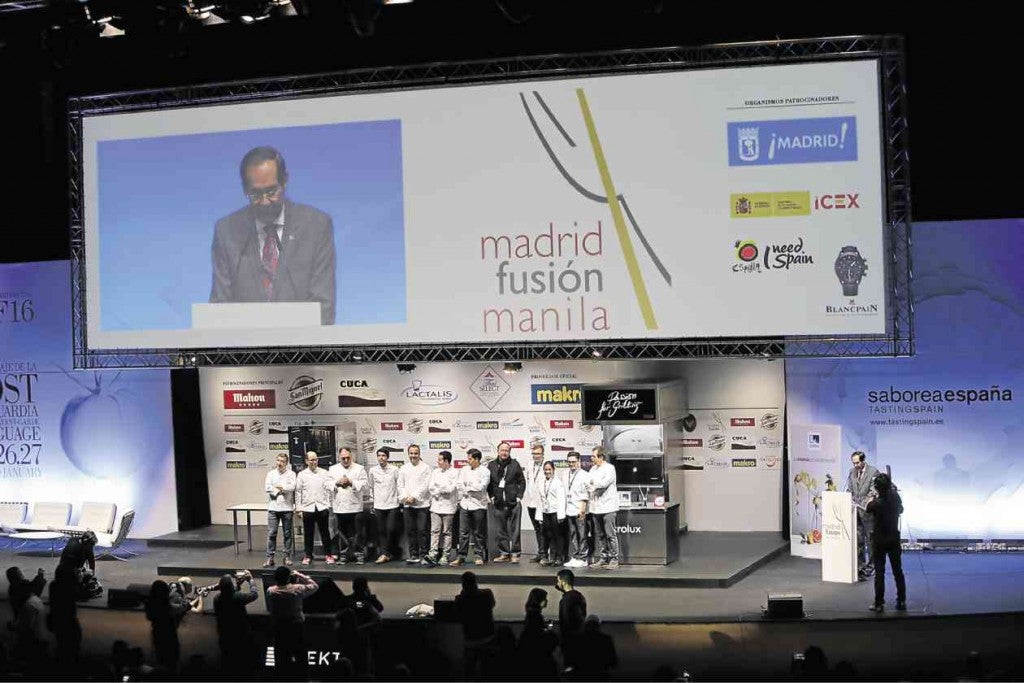 In the main auditorium of the Palacio Municipal de Congresos in Madrid last Tuesday, the crowd of culinary experts and enthusiasts listened attentively as Philippine-based Spanish Chef Chele Gonzalez talked about isaw, a Filipino streetfood; alugbati, a Philippine vegetable; and cooking with bamboo. The audience was enthralled by the videos that Gonzalez presented of his immersion with the Aetas, from whom he learned to cook with bamboo.

“But more than learning about their food, it was a spiritual experience for me,” he emphasized. “And that’s what I took back and now bring to the restaurant: a connection with history, anthropology.”

Indigenous food is good, Gonzalez argues, because you have something that is pure, though it might need to be refined; and connecting with indigenous communities is the only way you can discover the treasures they hold.

In his talk, Josean Alija, currently regarded as Spain’s No. 1 chef, discussed the importance of respecting produce.

“We have to bring out the noble characteristics of each product,” Alija said.

True enough, in Nerua at the Guggenheim in Bilbao, where Gonzalez and I dined two days later, Alija showed how, on a plate, he honors even the humblest of vegetables. Leeks are presented like jewels on a plate, with its flavors given importance by simply serving it with a delicate fish stock. In contrast, the flavor and texture of artichokes were highlighted by presenting them in Iberian ham broth. Alija has gone beyond cooking to expressing a reverence for what the earth has produced, presented in 25 courses. (Gonzalez worked with Alija for three years, after working with Chef Andoni Aduriz in Mugaritz, before moving to the Philippines.)

So at Madrid Fusion 2016, founder Jose Carlos Capel asked: What is post-avant garde cuisine? No chef answered the issue directly.

But among the talks resonated a singular message: the need to respect the earth and the communities that produce our food.

Chef Massimo Bottura, who was awarded on the final day of the congress for his efforts in shaping a culture of not wasting food in the kitchen, explained in his thank you speech: “We can feed more than 7 billion in the world. But now over 500 million tons (of food) are being discarded.” (In fact, a UK study has shown that half of the food produced in the world is thrown away.) Bottura has taken the lead in using his celebrity power to influence chefs all over the world not to waste food. 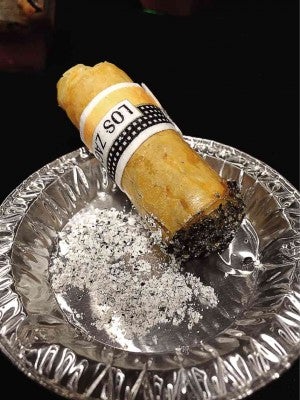 CIGAR? Not! It’s a filo of relleno sardines made to look like a cigar.

“The US and the European Union have committed to reduce waste to half in the next 10-15 years.

Osteria Francescana (Bottura’s restaurant) has put this in practice through a concrete project,” the chef shared.

Bottura has converted an old theater into a space where volunteers come together to transform food that otherwise would be wasted into edible, tasty food for public consumption, e.g. milk that is about to expire is used to make croquettas, old bread is converted into pudding, etc.

“Our celebrity allows us to be ambassadors of our culture,” Bottura stressed. “It is our duty to give ideas on the evolution of cuisine. So let’s start from our homes, our restaurants, to convert waste into food because the supply of food is in danger. Whatever we save is something that we have gained. Let’s change the perception of waste; and show that (what appears to be waste) is in fact something that can be utilized and shared.”

The United Nations has taken this a step further.

The goals were agreed upon by world leaders to achieve a future by 2030 where hunger, unemployment, inequality, and climate change are a thing of the past.

Chef Joan Roca, who will lead the list of speakers this coming April at Madrid Fusion Manila, shared a video of their appointment to the UN and their duty to advocate enhanced food security and access to nutritious food; as well as advise world leaders on improving food industry and agricultural practices to protect the environment and create jobs. 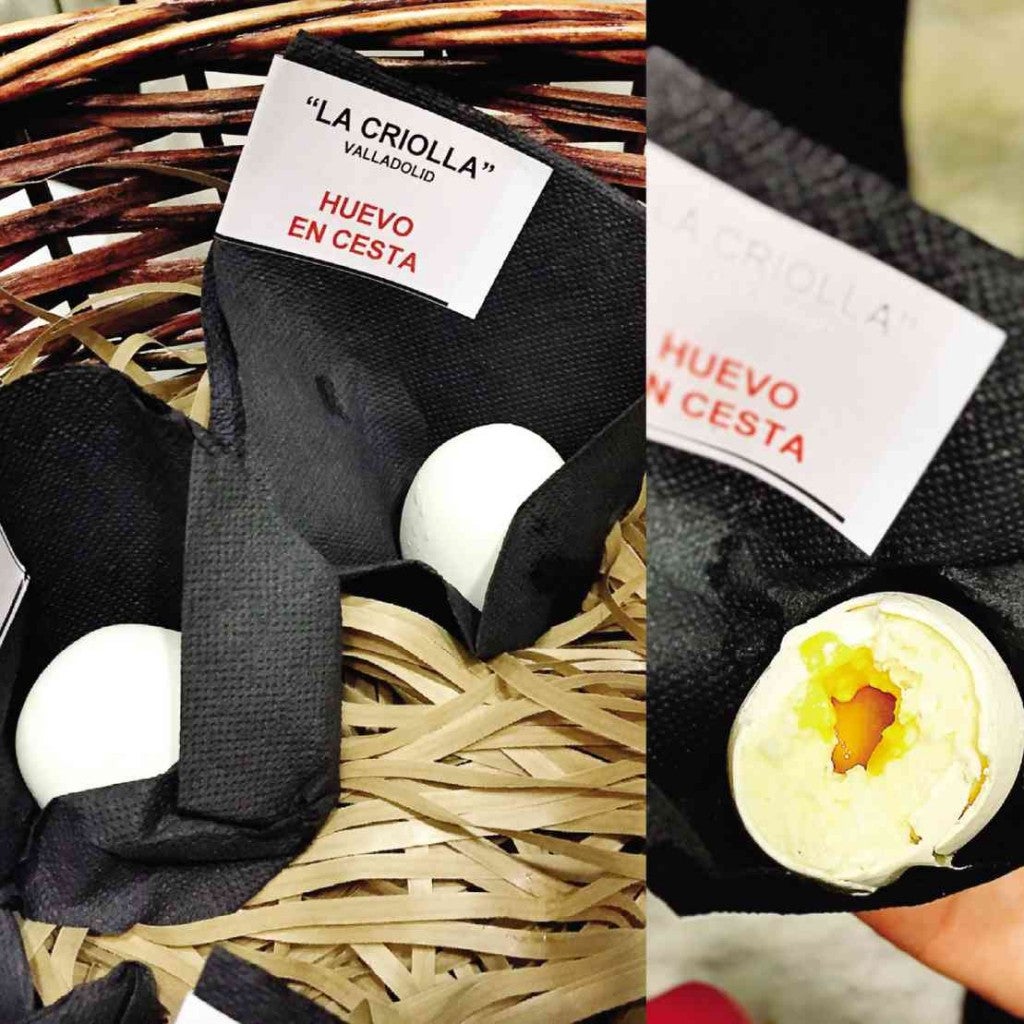 For its part, the Philippine Departments of Tourism and Agriculture have joined forces to help local farmers by promoting products such as heirloom rice, adlai, cacao. These were all on display at the Philippines booth set up under the guidance of Tourism Director Verna Buensuceso, who is also in charge of Madrid Fusion Manila. Congress participants were also made to taste Philippine heirloom rice through the adobo rice meal and champorado served at the booth.

Madrid Fusion 2016 was a very heartwarming experience, as the maturity of celebrity chefs became evident. Chefs today, including our adopted Pinoy Chef Chele Gonzalez of Gallery Vask, are taking the lead to empower local farmers and indigenous communities, protect endangered fish, encourage respect for produce, assist in ending world hunger and put an end to a culture of waste.

It is no longer just about what can be presented on a plate. The resounding message voiced out in Madrid Fusion 2016 is that chefs must recognize a higher duty that can be fulfilled simply by changing one’s ethics and practices in a restaurant.

There may be no post avant garde cuisine just yet. But there is a movement for chefs around the world to embody a new culture of responsibility, with an overriding commitment to protect local communities and produce, to save the earth, to change the world.

Madrid Fusion Manila will be held from April 7-9. It is a project of the Department of Tourism in cooperation with the Economic and Commercial Office of the Embassy of Spain, with the help of the Spanish Foreign Trade Institute (ICEX), the Spanish Chamber of Commerce (La Camara), and the Philippine Department of Agriculture. For details, visit madridfusionmanila.com. For some updates, visit margauxsalcedo.com. Follow @margauxsalcedo on Twitter and Instagram.