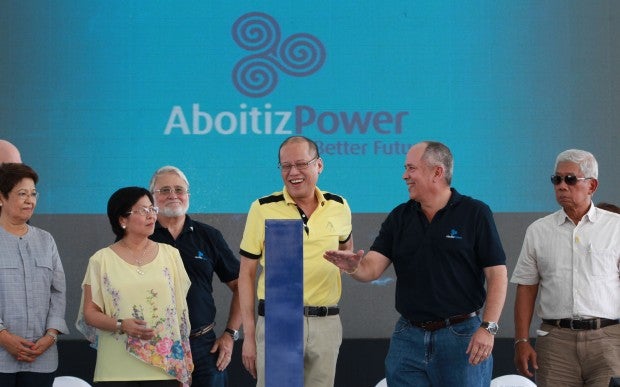 DAVAO CITY, Philippines—President Benigno Aquino III emphasized the potential of Mindanao and the need for peace to achieve development on the island as he inaugurated a 300-megawatt coal-fired power plant here on Friday.

Built by Aboitiz Power Corp., the plant is envisioned as a long-term solution to the power shortage in Mindanao.

But environmental groups saw the plant as adding to the Philippines’ vulnerability to the effects of climate change and criticized the government’s plan to build more coal-fired power plants despite Mr. Aquino committing the country to reduce its carbon emissions at climate talks in Paris last November.

“Apart from all the projects that have come to fruition during our administration, our private sector partners have committed to undertake at least another 11 power projects in Mindanao that will come online between 2016 and 2020, envisioned to produce at least another 675.30 megawatts of capacity, which will be more than enough to cover the projected increase in demand for those years,” President Aquino said at the ceremonial switching on of the plant in Barangay Binugao here.

It also serves the provinces of Davao, Agusan, Surigao, Sarangani, Sultan Kudarat, Zamboanga peninsula, and parts of Bukidnon and Misamis.

The President said that the plant’s “dependable capacity is roughly equivalent to one-fifth of Mindanao grid’s highest peak demand in 2015.”

He also emphasized the need to establish peace and security in Mindanao to aid in its development, citing the urgency in passing the stalled Bangsamoro Basic Law.

“Each time I speak about Mindanao, I mention how the goal for our administration is to transform it, from the Land of Promise to the Land of Promises Fulfilled, and over the past few years, we have seen the beginnings of this transformation,” he said.

The President admitted the challenges his administration faced dealing with the Mindanao power shortage.

“We had to come up with temporary measures to minimize the impact of the power situation. Among the schemes we came up with was the Mindanao Modular GenSets Program, wherein the government would help finance generator sets for cooperatives that wished to produce their own power,” Mr. Aquino said.

The government, he added, planned to buy back the generator sets once the power plants were in operation.

“Sadly, this program did not have the impact that we hoped. There were very few who took us up on our offer, and even then those who did took the longest time to go through the necessary processes. Nevertheless, those who did avail [themselves] of the Modular GenSets experience less brownouts. In fact, in most cooperatives, they experience no brownouts,” he said.

Mr. Aquino also mentioned the Interruptible Load Program, where the government urged big companies to use their own generators instead of sourcing power from the grid.

Even if the Aboitiz power plant runs on coal, the President emphasized that the government remains intent on developing renewable energy and is “doing [its] part to mitigate climate risk.”

“In fact, we have increased our usage of renewables, and they now make up 33 percent of our energy mix. We have reduced the number of illegal logging hotspots by 88 percent. And in 2011, we started a national greening program, the goal of which is to plant 1.5 billion trees on 1.5 million hectares by this year. We did all this even if our nation’s carbon emissions are minimal, especially compared to more industrialized countries,” he said.

“At the same time, the Mindanao situation has made it obvious that we also need more baseload power. After all, while I am a believer in developing renewables, at this point we are still hounded by the questions: What if there’s no wind? What if the [sky is] overcast and the solar efficiency is down? What if we do not have enough biomass? Unfortunately, right now, we cannot wean ourselves completely from coal,” the President said.

They criticized the government’s plan to build more coal-fired power plants, the biggest emitters of carbon dioxide in the atmosphere and the top contributors to global warming.

President Aquino attended the United Nations climate talks in Paris last November, leading small nations in pushing for a limit of 1.5 degrees Celsius in temperature rises, which was adopted by the conference.

“Countries with [coal-fired power plants] should retire them and invest in renewable energy,” Jean Lindo of the Network Opposed (NO) to Coal Coalition said.

“The Philippines should not build more and should start retiring the old ones,” she said.

“This President is a hypocrite,” said Ben Muni, climate and energy campaigner for Greenpeace Philippines.

Muni said that in Paris, Mr. Aquino committed to reduce the impact of climate change on the Filipino people, but now “he is attending the inauguration of the very source of climate-changing greenhouse gas emissions.”

“We are asking you, Mr. President: Where is your sincerity and commitment? It seems you have forgotten your commitment in Paris,” Muni said.

Erramon Aboitiz, chief executive officer of Aboitiz Power Corp., said the days of high polluting coal were a thing of the past and gave the assurance that his company would not “do anything” that would harm the environment as well as the lives of the people of Davao.

“To be fully transparent, there were some concerns and reservations related to coal and its environmental impact. We assured all the stakeholders that we would bring in the most modern facilities and would operate under the strictest environmental standards,” Aboitiz said.

“The days of highly polluting coal plants were a thing of the past and would definitely not be tolerated on Aboitiz Power’s watch. After all, the Aboitiz Group has been a part of Davao and its growth for many decades, and we would not do anything that was not good for Davao. We encouraged Mayor Sarah Duterte and the city council to host the power station in Davao so they could ensure we would comply with what we said we would do,” he said. With a report from Germelina Lacorte, Inquirer Mindanao