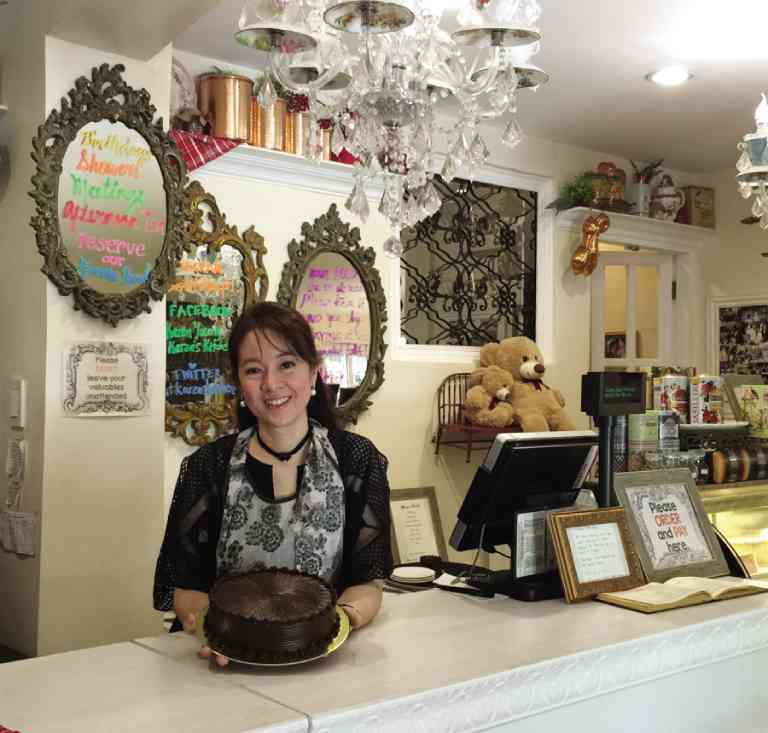 It started with a vintage oven.

Karen’s Kitchen has already made a name for itself as one of the top dessert makers in the metropolis, with their chocolate ganache and red velvet cakes often landing on several “best desserts” lists.

But when Karen Young found she had plenty of time to spare after her sons left for the US to attend university, she realized this might be the right time to challenge herself and expand her “kitchen.”

The home-based business that Karen started in the early 2000s became an instant hit when she opened her first official Karen’s Kitchen in Palm Village, Makati, in 2004. From family and friends who ordered cakes from her, some famous personalities, after receiving the cakes as gifts, eventually became her customers.

“It was my older sister who is actually the baker. I was just the observer and the taster. My first job was as a mixer stand. She would ask me to hold the mixer and she’ll turn it on. Basically I was a statue,” she related.

Karen said she would get really excited whenever her sister works her magic in the kitchen, and anticipated whatever comes out of the oven. Seeing how her sister enjoyed dishing out food for the family, she realized cooking could also be considered an expression of love. For Karen, food is a “three-dimensional hug.”

To enhance what she learned from her sister, Karen took short courses on cake decorating. She learned how to do airbrushed designs, brushed embroidery, smocking and fondant cakes. Her Business Management degree from the University of the Philippines in Cebu also came in handy when she finally opened Karen’s Kitchen in Makati.

Although Karen helped out in her husband’s business before, Karen’s Kitchen was her first solo foray into business. She got advice from her husband and a few friends, but said she sought guidance most from God.

“Many of the principles that I go by are actually old principles based on the Bible. It’s as simple as not cheating on my customers and on my employees,” Karen said.

Her good relationship with her employees is evident. Most of her bakers have stayed with her for over 10 years now.

With her dessert shop taking off, a friend suggested that she open up another branch and expand her menu.

But Karen was initially hesitant because she knew this would cut her quality time with her kids. She said she wanted to focus on her kids before they leave for college.

“There are so many cake makers out there, but I’m the only mother my sons will have. I want to spend time with them so that when they leave [for university], I will have no guilt in pursuing a new career,” she added.

As her sons prepared for college, Karen also started preparing herself in dealing with an empty nest syndrome. When the same friend suggested to her a vintage-style restaurant, the concept piqued her interest.

“I love the show ‘Little House on the Prairie,’ so when she said ‘vintage kitchen,” my heart was stirred,” she said.

To get started on her new project, Karen scoured the Internet for ideas and decorations that she can use on her second “Kitchen.”

She found on eBay a Detroit Jewel vintage oven from the 1970s, owned by a family in Venice, California. She was surprised when she actually won the bidding. Karen coordinated with the seller and arranged for the oven to be shipped to the Philippines.

With her vintage oven baking ideas for her new endeavor, Karen excitedly pushed to complete the first phase of her latest project. She went to the US to drop off her sons to the university and while there, combed through antique stores and thrift shops for accessories that would complement her vintage kitchen.

“It was a wild adventure. I started with a mission to get the vintage oven … and then I found things that would match the oven. It was like everything’s falling into place,” she said. 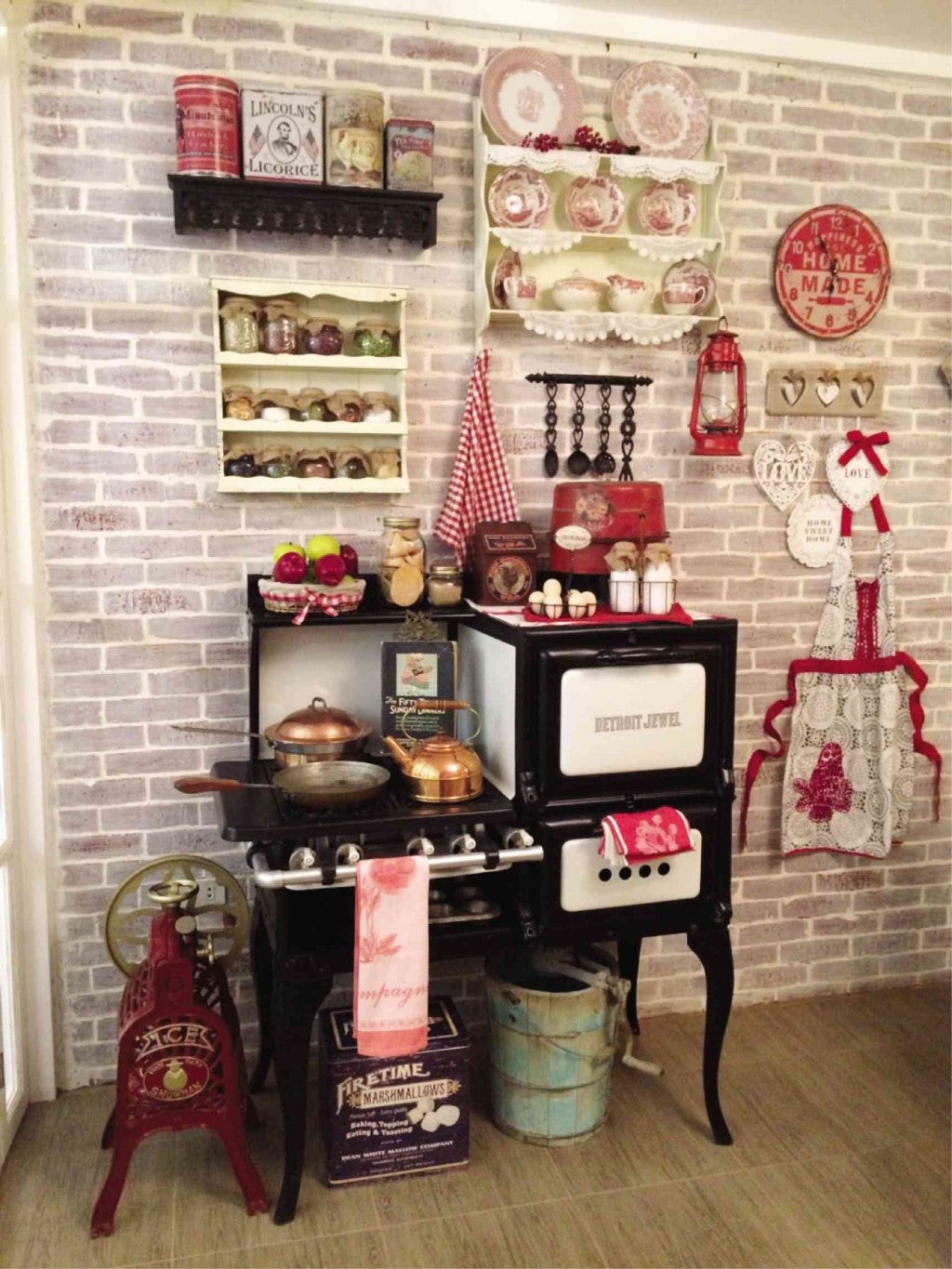 Karen then began plans for her second shop. She scouted for new locations in different cities, but somehow felt drawn to Kapitolyo in Pasig. After driving around the area, she found an old dilapidated house with a “For Rent” sign. Despite the house’s sorry state, she got excited because it resembles the house on her business logo.

She immediately had the house renovated and decorated with her finds from the US, with the Detroit Jewel vintage oven as the centerpiece, Karen’s Kitchen Kapitolyo finally opened in April 2015.

Karen knew that with the new shop’s location and floor size, it was not viable to just sell pastries. In contrast to her first shop which only had cakes and desserts, she expanded her menu in the new branch to include hot meals. Although she loved cooking for her family, this will be the first time for Karen to do so professionally.

“It was something new that I haven’t done before. It was really a leap of faith for me,” Karen shared.

At first, Karen’s Kitchen offered many kinds of cakes and hot meals. Karen then realized majority of her customers came back for particular cakes only, while a few walk-in customers asked for rice meals.

“Instead of wasting all those ingredients, I decided to just listen to what my customers wanted. I just sell the bestselling cakes, and cook the hot food they usually order,” she said.

If she likes the food her customers request, the dish usually becomes a mainstay on the menu. Sometimes she tweaks the ingredients, but Karen is particular that everything that comes out of her kitchen must be healthy.

“I serve home cooking, that is, if I welcome you to my home, these are the food that I will cook for you. I give customers a product that I myself would really love. I think of myself as a customer. I ask myself, ‘Would I love this?” she said.

Aside from her excellent kitchen skills, Karen’s sunny disposition has endeared her to her customers.

“When I go to different countries, the experience that I cherish the most is being invited to one’s home. That for me is like ‘tasting the country,’ because besides the food per se, I experience the culture of the people. The warmth and hospitality of a friend. So when I’m done with my cooking chores here, I try my best to meet and welcome the customers. Some of them became my friends,” Karen shared.

She finds it rewarding when her customers choose Karen’s Kitchen for special occasions, such as renewal of vows and sendoff parties.

“If good food is what it takes for them to want to be here during their life’s milestones, then I’m happy,” Karen said.

For Karen, her growth and success as a businesswoman are attributed to her unwavering faith in God, and her belief in being “raised by a village.”

“Success is something I aspire for. There are so many things I want to improve on, and I want to deliver my best. And I feel I can do those through the help of my family, my spiritual family who pray for us, the customers who became my friends, and my [Karen’s Kitchen] team. We are raised by a village. It’s a community effort. We don’t stand here alone.”