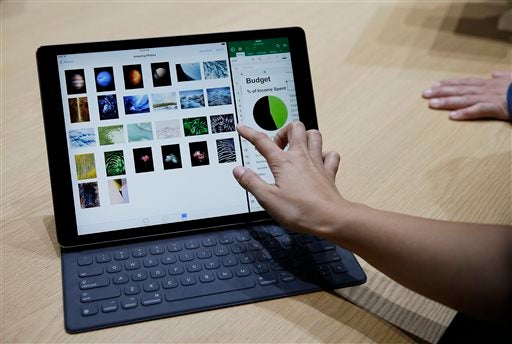 The new iPad Pro with a Smart Keyboard is displayed following an Apple event Wednesday, Sept. 9, 2015, in San Francisco. Apple shares rebounded in early trade Thursday, a day after a lukewarm market reaction to the US tech giant’s launch of upgraded iPhones and other devices. AP PHOTO/ERIC RISBERG

NEW YORK—Apple shares rebounded in early trade Thursday, a day after a lukewarm market reaction to the US tech giant’s launch of upgraded iPhones and other devices.

Analysts say Apple is seeking to diversify its product line amid a competitive global smartphone market, and that its new iPad Pro, Apple TV streaming device and Apple Watch may help.

“The new offerings are welcomed additions to the portfolio that will strengthen not only the competitiveness of each product category, but also the wider ecosystem and the increasing developer effort behind this platform,” said analyst Kulbinder Garcha at Credit Suisse in a note to clients.

Jan Dawson of Jackdaw Research said that while the iPhone accounts for most Apple revenue, the upgraded Apple TV device “is one of the biggest and most important things announced” and “should drive significant new revenue for Apple and for developers.”

Sundeep Bajikar at Jefferies said he was “underwhelmed” by the new iPhone 6S, which has the same dimensions as the iPhone 6 introduced last year but with new technologies under the hood.

“The smartphone market is maturing, Android capabilities are just as good if not better than iOS, and competition from China is intensifying,” he said in a research note.

“To extend its brand advantage, particularly in China, Apple needs to introduce new categories of products/services, a process that Apple has begun with the Watch, Apple Pay, and iPad Pro.”

Dawson said he sees promise in the Apple TV system as more viewers stream content from the Internet instead of broadcast and cable systems.

The device “will create a huge new opportunity for both existing and new developers, both in gaming and content, and in the process it’ll make the device more compelling for end users too,” Dawson said in a blog post.

“But what will really change the Apple TV is the launch of the Apple TV service a few months from now, because only then will the Apple TV be capable of becoming the only device you need to plug into your TV.”