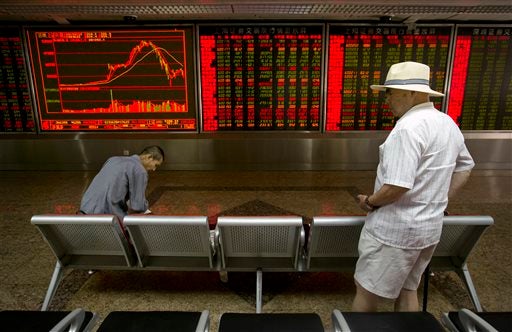 Shanghai enjoyed a late spurt after China’s two stock exchanges announced new rules that effectively restrict short selling, declaring Monday that investors who borrow shares must wait until the next day to pay back the loans, instead of settling the same day as under previous rules.

Since the Shanghai market crashed 30 percent from its peak in mid-June, China has announced a series of stabilizing measures, including a ban on major shareholders selling stocks and suspension of new share offerings.

“All the government’s measures including restrictions on short selling are working now,” Wu Kan, a Shanghai-based fund manager at JK Life Insurance Co., told Bloomberg News. “It’s a rebound and given the momentum, it may last for some days.”

In Australia, the central bank held interest rates at a record low of 2 percent while keeping the possibility of further easing on the table.

The Reserve Bank of Australia (RBA) has slashed rates by 250 basis points since November 2011, with the latest 25 basis points cuts coming in February and May, as the economy adjusts to a shift away from an unprecedented boom in mining investment.

China receives most of Australia’s iron ore and coal exports, and central bank governor Glenn Stevens said in June the country was “more sensitive to fluctuations in China’s performance than other countries.”

Investor nervousness has been compounded by weak Chinese manufacturing activity last month, with similarly negative data announced in the United States on Monday.

On Monday, Wall Street fell with petroleum-linked equities retreating on a big drop in oil prices.

Asian investors were also bracing for a heavy week of US economic indicators.

The most eagerly anticipated release is Friday’s jobs report for July, which could strengthen confidence the Federal Reserve will soon raise interest rates, perhaps even in September.

In Tokyo share trade, Toyota fell 0.96 percent to end at 8,121 yen. The company said after the closing bell its net profit for the three months to June jumped 10 percent to $5.2 billion.

Elsewhere, India’s central bank kept its own key interest rate on hold Tuesday, as analysts had expected, resisting government pressure for a fourth cut of the year.

The Reserve Bank of India (RBI) has cut rates three times in 2015 to aid India’s economy, which outperformed China’s for the first three months this year.

The RBI said the benchmark repo rate–the level at which it lends to commercial banks–would remain at 7.25 percent.

Government pressure to announce another cut was eased by data released Monday that showed factory output climbed to a six-month high in July on strong demand.

Standard & Poor’s said it had changed the outlook for the European Union from stable to negative after the bloc’s support for Greece and following Britain’s decision to vote on leaving the EU.

On Monday, Greece’s stock exchange, resuming trade after a five-week shutdown, plunged around 20 percent at the open before finishing down 16.23 percent in its biggest single-day drop ever.

Adding to broader regional concerns, the 19-nation eurozone’s inflation and jobless rate came in flat in July, according to data published on Friday, suggesting only modest growth.

Crude oil remained below $50 a barrel in Asian trade amid concern over a global supply glut, but US benchmark West Texas Intermediate for September rose 47 cents to $45.64 while Brent crude for September increased 32 cents to $49.84.