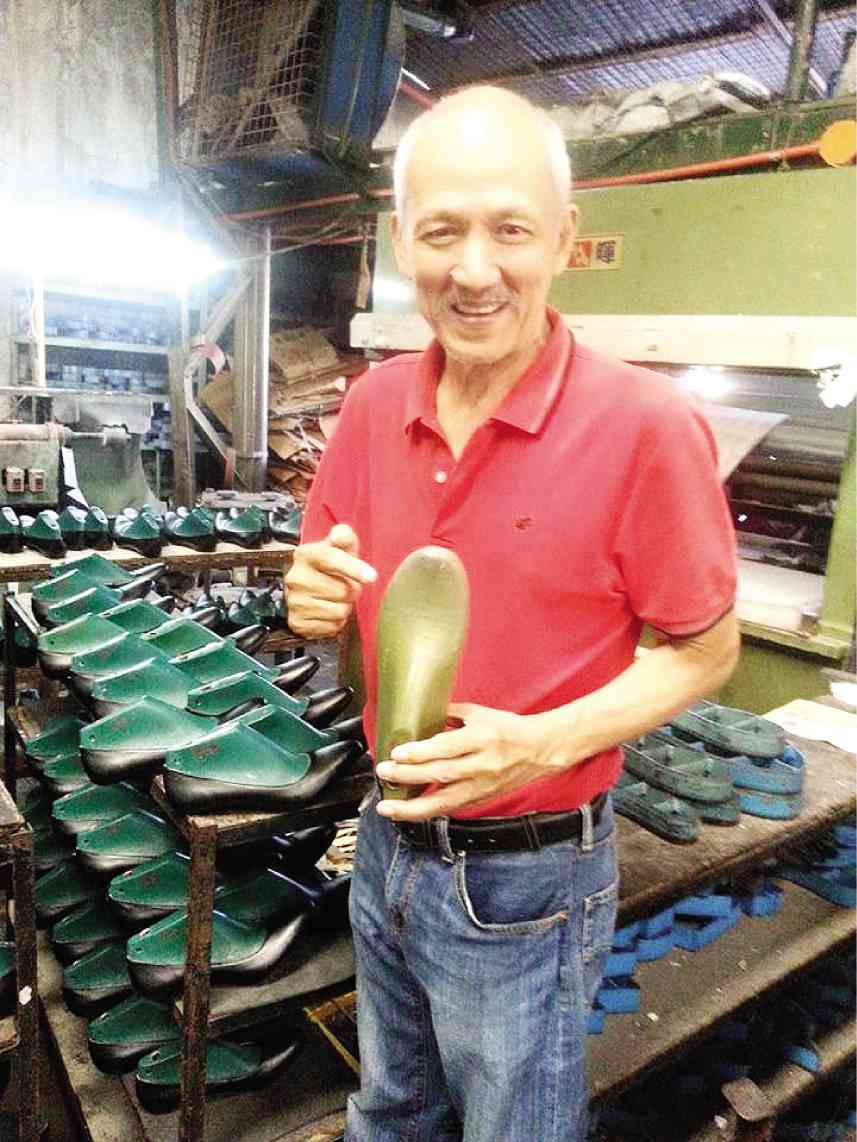 In the almost 50 years he and his family have been into shoemaking, Francisco Medina witnessed the changing fortunes of the Marikina shoe industry—from its glory days in the 1960s to its decline in the ’90s with the advent of liberalization up to its present efforts to get back on its feet.

There was a time when almost every household in this former Rizal town ran a shoe-making shop on its ground floor. Whole families engaged in the craft, with children learning how to make shoes even before they began to read and write.

Over time, some home-based workshops grew into industrial plants that mass-produced footwear. Out-of-towners were soon enticed to settle in Marikina to work in shoe factories, leading to the expansion of the trade and growth of the population.

The story goes that the shoe-making tradition in the erstwhile farming community was started in 1887 by Laureano Guevarra, who disassembled a broken pair of imported shoes in order to fix it, having failed to find anyone in town who could repair it.

This was the springboard for the first Marikina shoe production. In time, Kapitan Moy, as he became popularly known, employed residents in his factory between the planting and harvesting seasons.

By the turn of the century, shoemaking had become entrenched as a steady source of livelihood for people in Marikina.

Medina was among those born to shoemaking.

It was his parents’ small shoe-making shop in Barrio San Roque that raised and sent their brood of 10 to school. The children were expected to learn shoemaking and be useful around the factory.

A mechanical engineering graduate, Medina was at first disinterested in the shoe trade. He enjoyed marketing heavy equipment for a multinational company. He, however, had to say goodbye to corporate life when the assassination of Ninoy Aquino in 1983 triggered a political crisis and economic slowdown.

With a substantial separation pay and no job prospects in sight, it made sense to go into business he was familiar with. That was how he became a second-generation shoe entrepreneur.

He called his company Kijem Collections, which was later incorporated into MEDZ Shoe Corp.

Running his shoe company has been a roller-coaster ride but he managed to cling on, even as colleagues in the industry have been falling by the wayside.

At its peak, there were some 2,000 industry players in Marikina. When trade liberalization happened, this was cut by half.

“Today, there are just over a hundred of registered shoemakers,” Medina said.

Those were the years the Marikina shoe trade fairs thrived. The first was put up in Santa Elena, Marikina; another was in Cubao, Quezon City and the other in Manila.

“Marikina became popular because of these trade fairs, where shoes can be bought much cheaper than in department stores. Why? Because we eliminated the middleman; manufacturer and end user directly transacted with each other,” he said.

Yes, he answered, and not just because of her passion for shoes and her penchant for wearing pairs from Marikina.

“She put up a training center for the industry. When the Marcoses fled, the facility became a white elephant,” he said.

Nonetheless, the industry continued to thrive.

“With the import control policy, there was practically no competition from outside. We enjoyed a sellers’ market when the United States and Japan ordered in volume. For 10 years, we dictated the price, the terms,” he recalled.

How much of a seller’s market it was is illustrated by a vignette Medina related: Henry Sy of SM fame would be seen going around shoe factories in Marikina around Christmas time.

“Whatever it was we were willing to sell, he would buy right then and there, paying in cash,” he said.

Then the double whammy hit.

First, Taiwan began producing cheap shoes. By the early ’80s, the Americans and Japanese had stopped buying from the Philippines and shifted to Taiwan.

Then, in 1994, the Philippines joined the World Trade Organization, which committed the country to trade liberalization. The floodgates for imported goods opened, all but drowning local industries.

After the export trade fizzled, the playing field changed drastically. Big players who lost their export clients began focusing on the domestic market, edging out the small ones.

“Small and medium enterprises were marginalized because we didn’t have the mass-producing technology and could not compete in price,” he said.

Those who stayed on had to cope with the grim reality of a buyer’s market: big inventory levels, marginal pricing, postdated check payments by two, sometimes three months. Harsh terms for a small entrepreneur.

His own company managed to survive because he had fortunately found a market niche—braided footwear—and had extensive marketing experience from his corporate days.

He also took advantage of government programs that taught him financial management, inventory control, and other systems. He remembers training programs conducted by the Technical Skills Education Development Authority, the UP Institute for Small-Scale Industries (UP ISSI), and the Small Enterprises Research and Development Foundation (Serdef).

“Those who didn’t take advantage of the trainings were the first casualties,” he recalled.

For the industry to again thrive, Medina said it needed to do things differently.

He said the industry was floundering not because there is no market, nor because competition from imports is hard to beat.

“The industry is floundering because there is no industry to speak of,” he said.

“We are a country of 100 million people. With per capita demand conservatively pegged at 1.5 pairs of shoes a year, this translates to a total demand of 150 million pairs. The local industry combined—Marikina, Cebu, Antipolo, Montalban, Laguna—cannot produce 20 million pairs a year,” he pointed out.

Medina said the shoe-making craft and entrepreneurship tradition, which all but died with the liberalization scare, must again be championed.

“Today, we need new industry entrants; and for them to come forward, there should be a pool of skilled shoemakers,” he said.

The Philippine Footwear Federation, of which Medina is a board director, is fortunately going in the right direction when it began to put up, with the assistance of the Department of Trade and Industry and (DTI) and the Tesda, a training center for shoe craftsmen to ensure a continuous supply of skilled manpower. Ongoing is the development of the curriculum for modular courses.

The federation is also working with the Department of Education to include shoemaking in the technology and entrepreneurship component of the K to 12 course design.

In the federation itself, there is a handful of new members—third generation shoe entrepreneurs who Medina calls the industry’s “shining hope.”

“They are more pro-active, creative and energetic,” he said.

His own daughter, Abby, is one of these “young turks.” She has her own brand called “Shoe Room,” which she successfully sells online.

Another project in the works is a common service facility that will make available state-of-the-art equipment for small shoemakers wanting to avail themselves of technology.

For the shoe industry to be resurgent, a holistic plan of action needs to be formulated and implemented by the industry itself, the government and other stakeholders working together. He looks to UP ISSI and Serdef for guidance in drawing this map.

The action plan should include leveling the playing field for small and large players alike; putting in place an infrastructure for raw-material procurement; studying the market and formulating market strategies; and productivity improvement through training and modern systems.

Medina himself advocates concentrating on high-quality, handmade products for the higher-end market.

The road map cannot be pushed without political will.

“Whoever will manage the economy should prioritize sectors that will create jobs and promote inclusive growth. And the shoe industry is one of the most labor-intensive you can think of,” he said.