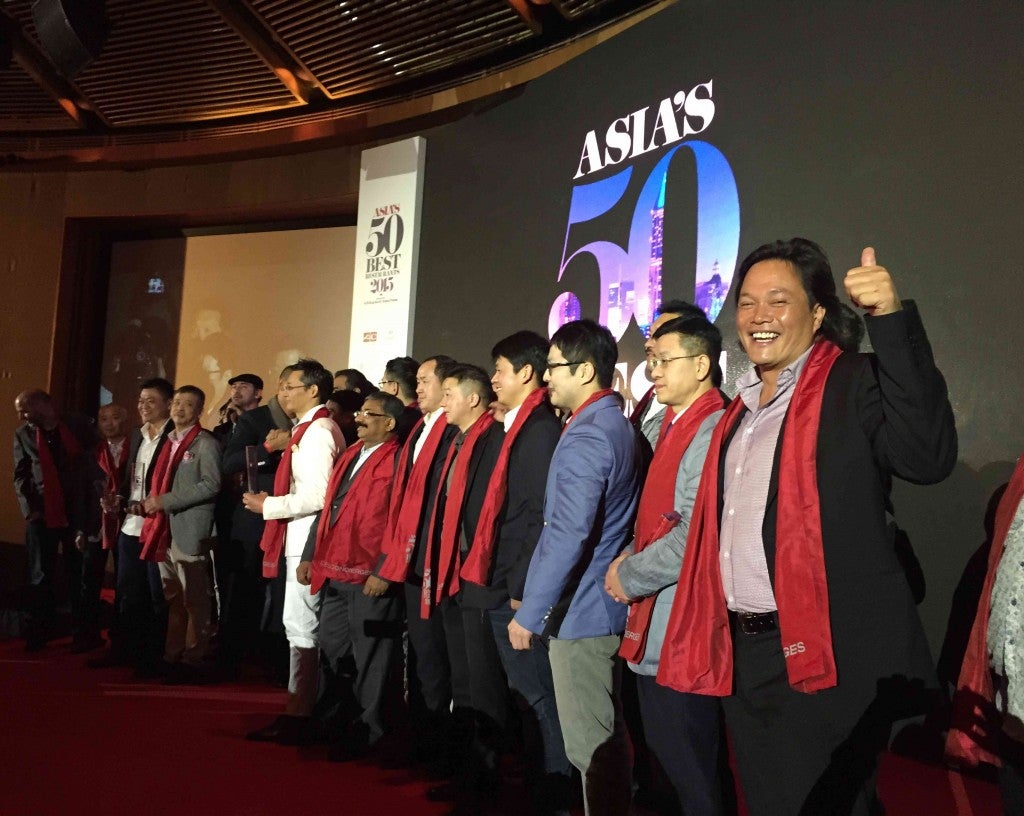 Thumbs up for the Philippines. Antonio’s owner Tonyboy Escalante takes his place among the greats in the culinary world.

“I am motivated now more than ever, although I never pressured myself to win any of these awards. I’ve always just strived to get better at my craft for myself,” Escalante said in an interview.

Leading the list of Asia’s 50 Best Restaurants this year is Thailand’s Gaggan, which snatched the No. 1 spot from David Thompson’s Nahm, which slipped to No. 7.

Gaggan opened his eponymous restaurant in Bangkok in 2010 and has made waves for reinvigorating Indian cuisine using modern techniques and molecular twists.

Now you know where to eat when you head to Bangkok, aside from trying its amazing streetfood.

Narisawa maintained its spot at No. 2, although only eight restaurants from Japan made it this year.

Shanghai’s Ultraviolet by Paul Pairet climbed to No. 3 as Hong Kong’s Amber slid down to No. 6.

Meanwhile, 10 restaurants from Singapore made the list, led by Restaurant Andre, which climbed a notch to No. 5.

I was able to eat at Restaurant Andre on this trip, which set our group of four back 430 SGD each.

Chef Andre Chiang, by the way, will be participating in Madrid Fusion Manila this coming April.

He will give a talk at the Congress in SMX.

Other Singapore restaurants on the list: Burnt Ends made the list for the first time (where Chef Jessie Sincioco’s nephew Jeff Claudio works the kitchen under the leadership of the hip and happening chef David Pynt). Tippling Club, run by Australian Chef Ryan Clift, formerly of Vue de Monde, the only Melbourne restaurant in 2007 to make it to the World’s 50 Best Restaurants, joined the list at No. 36. And Osteria Mozza, which proudly has an all-Filipino service team and whose pizzeria sibling is run by Filipina Chef Karla Mendoza, made a comeback.

By the way, if you find yourself in Singapore, check out One Farrer Hotel in Little India. It just opened last year, is sleek and spacious, and has its own MRT stop.

Congratulations to all the restaurants and chefs who made it, especially to Chef Tonyboy Escalante, who has once again brought pride to the Philippines.

Read Next
Coffee farmers, entrepreneurs challenged to raise local output
EDITORS' PICK
Cagayan gov endorses 10-day ECQ in Tuguegarao due to COVID-19 surge
Experience clearer calls nationwide with Smart VoLTE
No warrantless arrests despite DND-UP accord termination, says PNP spox
New Year, New Rediscoveries
Driving can be even more rewarding this New Year — here’s why
Biden team says US will not lift travel bans, despite Trump statement
MOST READ
Proposed toll for newly opened Skyway 3 ranges from P110 to P274
Duterte to firms: No franchise until you settle your accounts with gov’t
‘Hotbed of recruitment’: Lacson backs termination of UP-DND accord
Palace: Duterte’s ‘no payment of gov’t dues, no franchise’ remark covers all, even ABS-CBN
Don't miss out on the latest news and information.