AirAsia aims to be Asean’s wingman 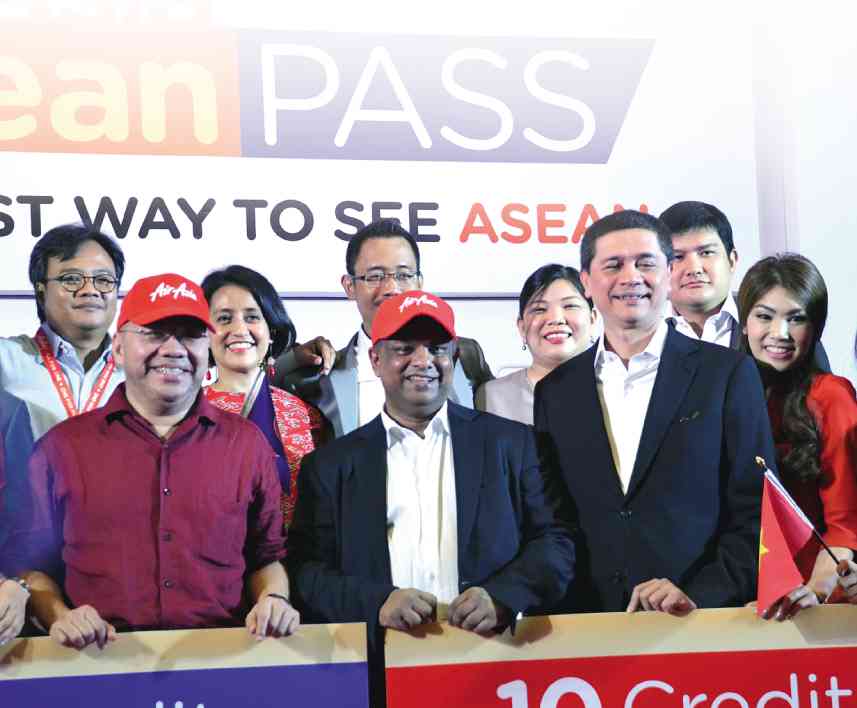 AIRLINE officials and guests are on hand for the launch of AirAsia’s Asean Pass and Asean Pass + at the Centara Grand in Bangkok, Thailand.

After one of AirAsia Group’s aircraft figured in a fatal crash on Dec. 28, 2014, many believed the budget carrier of Malaysian tycoon Tony Fernandes would nosedive.

Shares in AirAsia fell 7.8 percent a day after the Airbus A320-216 operated by its Indonesian unit crashed into the Java Sea, killing all 162 people on board.

A few days later, AirAsia flights from Surabaya, Indonesia, to Singapore were grounded by authorities after it was found that the ill-fated flight QZ8501 had been flying on an unauthorized schedule.

But more than 50 days later, Fernandes was in Bangkok, Thailand, launching two of the budget carrier’s newest products.

The launch of AirAsia Asean Pass and AirAsia Asean Pass + at Centara Grand was described to be a wise move on the part of Fernandes, as it came only months ahead of the planned economic integration of the members of the Association of Southeast Asian Nations (Asean)—the Philippines, Brunei, Cambodia, Indonesia, Laos, Malaysia, Singapore, Burma (Myanmar), Thailand and Vietnam.

Set at the end of 2015, the planned integration of the regional bloc’s member-countries, through the Asean Economic Community, will reportedly usher in a new era of “borderless competition” across industries. As the Asean becomes a single market, goods, services, skilled labor, investments and capital will freely flow across the region.

Our dream is to create our own tourism market, free of external shocks, Fernandes said in a speech during the launch attended by reporters from all over the region. “And this is my big belief in Asean. We will now have a 600-million [people] market, which gives us the size of almost China and India.”

According to the statement, these credits are “redeemable for travel” with AirAsia Malaysia, Thai AirAsia, AirAsia Indonesia and Philippines AirAsia to Asean destinations, using any of the more than 148 available routes.

But because the launch took place mere weeks after the fatal crash, Fernandes found himself on the defensive, denying that the two products were aimed at boosting demand.

In fact, he said, the passes—which were based on concepts behind Greyhound bus and the Eurail—were AirAsia’s way of “saying thank you to the people of Asean” for helping the airline, and the families who lost loved ones in the crash, through the period.

“Asean showed itself in the best possible way on Dec. 28, 2013, when we all got together to help all the families involved in that terrible day. In our small way, this Asean pass is to give people… a chance to get to know this wonderful part of the world—600 million people, 10 countries,” Fernandes said.

He added the products were the airline’s “way of integrating Asean… And to show the world that there’s a fantastic product in Asean.”

The Malaysian entrepreneur noted that the products would serve to encourage people “to visit all the different places” in Southeast Asia.

And the “biggest beneficiary” of the new products will be Indonesia and the Philippines, Fernandes added.

With Indonesia, other places there, apart from the world-renowned Bali, will be promoted, he said.

And as for the Philippines, the world will finally know “how beautiful the country is, how amazing the people are… That’s what we can do,” he added.

Fernandes cited Puerto Princesa and Coron in Palawan, describing the spots to be some of the most beautiful places in the world.

“Who knows that? How many people search it [on Google]? Very few people. At AirAsia, we’re good at building brands,” he said.

But is the region ready for such products, given the lack of infrastructure in some Asean countries particularly the Philippines?

A shining light for aviation

Fernandes had a ready answer using the chicken-and-egg analogy: “You can wait for the infrastructure. [But] the infrastructure is also waiting for the flights. In our case, we don’t wait. We say, let’s go do it… let’s work with the authorities to make it happen.”

He noted that 60 percent of the airline’s routes—such as the Kuala Lumpur, Malaysia, and Kalibo, Aklan, route—were “routes that have never been done before.”

The airline, he said, takes a positive approach, trying “to effect change.”

Fernandes also said that Asean was “one of the shining lights for aviation, at the moment.”

In the Philippines, he said, the AirAsia Group is set to consolidate its operations.

Joy Cañeba, president and chief executive officer of AirAsia Zest, told reporters after the launch that the airline had “just secured the approval” of the Securities and Exchange Commission.

We will now apply with the Civil Aeronautics Board and the Civil Aviation Authority of the Philippines,” Cañeba said, concerning the airline’s plan to rebrand AirAsia Zest, controlled by businessman Alfredo Yao, to Philippines AirAsia.

AirAsia Philippines will acquire the remaining 51 percent stake in Zest Airways Inc. held by Yao in exchange for a 15-percent interest in Philippines AirAsia.

The transaction is expected to be completed at the end of the month.

“It’s one of my dreams to make this happen. So I’m thrilled that we are able to put it together,” Fernandes said.

But does this mean the grieving families of those on board Flight QZ8501 will soon be forgotten?

“Words can’t express what they have gone through… during this period,” he said. “Our concern still remains with the families, and we still have work to be done. But we have to carry on as well.”