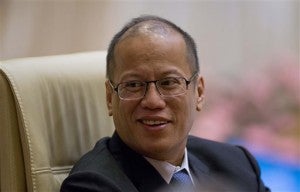 President Aquino said on Tuesday he would leave to his successor the decision as to whether the Philippines would join an Asia-Pacific free-trade arrangement. AP FILE PHOTO

BEIJING—President Aquino said on Tuesday he would leave to his successor the decision as to whether the Philippines would join an Asia-Pacific free-trade arrangement.

The United States is pushing a Trans-Pacific Partnership (TPP) agreement that will encompass 30 regional economies, not including China.

China, however, is pushing its own trade liberalization framework called Free Trade Area of the Asia-Pacific (FTAAP) as part of President Xi Jinping’s vision of an “Asia-Pacific dream.”

President Aquino said while all 21 Apec leaders agreed here to start work on the FTAAP, the studies for it would be concluded toward the end of 2016 when he would have already stepped down from office.

“The bottom line is, I would be out of office by 2016 and I would not want to, you know, like tie the hands of my successor,” he said.

The President said, however, that the Philippines would study the arrangement and prepare for it.