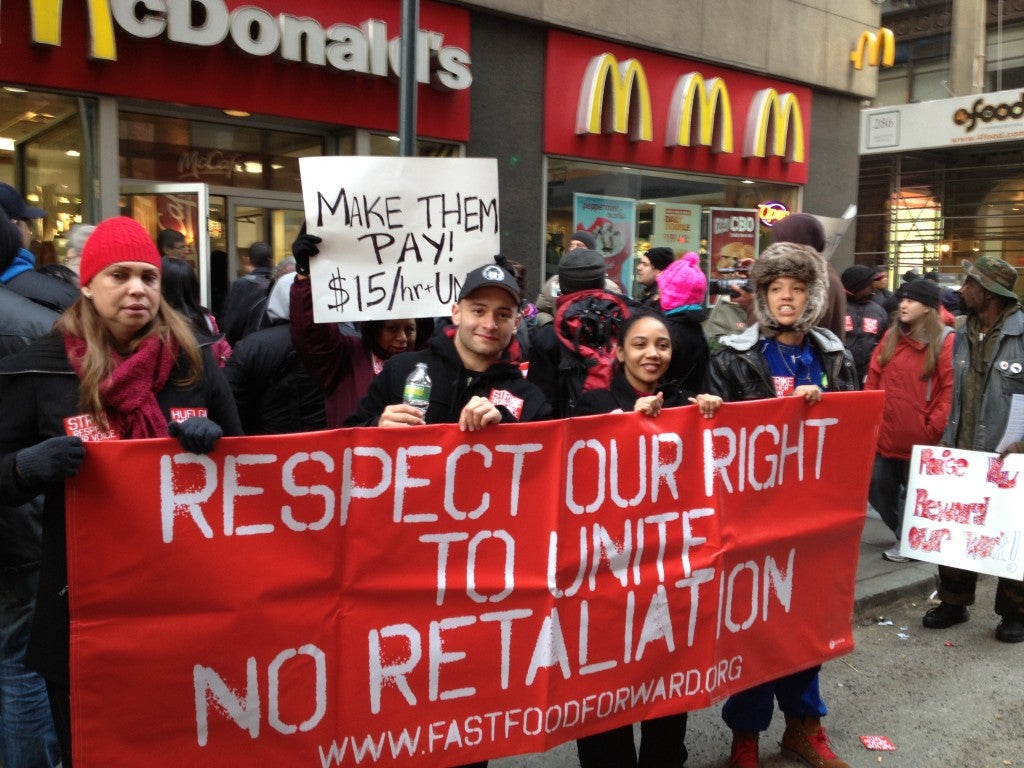 “We’re a global movement now,” said South America-bound Dora Peña, a 50-year-old mother who has worked as a custodian and a cook at a Chicago McDonald’s for eight years, is paid $8.65 an hour and relies on public assistance to support her young daughter.

“This fast-food worker movement is teaching a lot of people like me that we can speak up for ourselves, that we have rights, and that we deserve more for our families. We’re eager to take that lesson and share it with workers overseas,” Peña explained.

The growing global movement for higher wages comes as international markets become more critical to the bottom line of fast-food companies like McDonald’s. Due to flagging domestic sales, McDonald’s growth depends almost entirely on expansion overseas. One of the company’s major goals, stated on a 2013 Q1 earnings call, is to “broaden accessibility to brand McDonald’s around the world.”

Today, nearly 60 percent of the company’s 35,000 stores are outside the United States, and the company earns nearly 70 percent of its revenues and more than half of its operating profit from its international operations. It is the dominant fast-food player in Europe, Latin America and Japan.

The workers’ trip—organized by the International Union of Food, Agricultural, Hotel, Restaurant, Catering, Tobacco and Allied Workers’ Associations, a federation of 396 trade unions in 126 countries representing a combined 12 million workers — comes just months after workers from dozens of countries got together in New York City for the first-ever global fast-food workers meeting. Following the meeting, workers in 33 countries organized protest actions in support of striking fast-food workers across the United States.

“Whether you’re in Los Angeles, Tokyo, or Manila, we’re all fighting the same battles for better pay, union rights, and respect on the job,” said Asia-bound Moses Brooks, a 23-year-old cashier and cook from Riverside, California, who is paid just $9 after three years on the job and relies on food stamps to get by.

“This trip is about learning from each other, strengthening the ties between American fast-food workers and our colleagues abroad, and building our movement globally,” Brooks said.

They will also visit countries like the Philippines and the United Kingdom, where, like in the United States, workers are struggling to get by on minimum wages and erratic schedules, without the protection of a union.

“We know that in some countries, fast-food workers are paid a decent wage and have union rights,” said Europe bound Flavia Cabral, a 53-year-old McDonald’s worker from New York City, who earns New York’s minimum wage of $8 and struggles to afford school supplies for her daughters and medicine for her husband.

“Well, we work for the same companies, so we deserve the same treatment no matter what country we work in— wages that can support a family and respect on the job,” Cabral said.

American McDonald’s workers will visit with Danish workers to see directly how McDonald’s can pay workers decently and support union rights and still be profitable.  In the United Kingdom, they will meet with lawmakers, labor leaders, and community allies about how low wages and zero-hour scheduling affects workers.

In Japan workers will protest low wages at a Tokyo McDonald’s. And in Argentina, workers will meet with lawmakers as well as the leaders of the Pasteleros, which represents 34,000 workers—more than half of whom are McDonald’s employees.

“The industry is dominated by a handful of multibillion-dollar global companies, so we need to have a strong, global movement of workers pushing for better wages, better treatment and better rights,” said Massimo Frattini, the international coordinator of the IUF.

“America’s fast-food workers have captured attention in and around the industry and beyond. Their mobilization offers an opportunity to transform the industry in many parts of the world,” Frattini said.