Know the higher calling of journalists 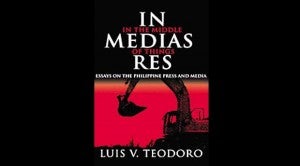 “IN MEDIAS Res” By Luis V. Teodoro University of the Philippines Press, 2012

Media space and airtime are replete with the ordeal Vice President Jejomar Binay is going through in the hands of some Senators over his unexplained wealth. Fortunately enough, he is not faulting media for his current predicament.

Other officials who fell from grace with their falling approval ratings, however, are quick to blame media.

On one hand, they need media to enjoy the “multiplier effect” of their marketing messages. If they rely on their door-to-door salesmen or their delivery trucks, they cannot cover the marketplace with the speed necessary to outpace competition—if not simply achieving their sales targets.

On the other hand, they hate or fear media when an error, misdemeanor, or an insensitive statement is picked up by the press, and is kept burning in the news for some time.

Recently, I got hold of a book, titled “In Media Res”— subtitled “In the Middle of Things”— from the Popular Bookstore and it helps shed light on the work of journalists.

It is authored by a respected journalist and academic, former Dean and currently a co-faculty member in the UP College of Mass Communication—Luis V. Teodoro.

The book is a collection of essays, lectures, papers and speeches of Dean Teodoro over the years—and yet his comments are not dated.

He cites, for example, the virtues a journalist must possess if he is to be respected and trusted. “At the core of the best practice of journalism are the basic values and principles of truth-telling, freedom, justice, humanness, and stewardship.”

To executives listening to the Dean of Journalism in the Philippines, these are reassuring. He continues: “These are ethical principles from which the professional standards of accuracy, fairness, and autonomy cannot be separated.”

Truth-telling, he explains, is achieved through factual and contextual accuracy. Freedom is manifest when the journalist exhibits independence. Justice is realized when the reporter practices fairness and balance.

And, hear this, coming from a respected authority on Philippine journalism: You achieve “humanness” through the protection of the vulnerable and the powerless.”

So, if journalists are taking up the cudgels for the victims of the Ampatuan massacre, they are simply protecting the vulnerable and the powerless.

The theme of press freedom rings and shines through this book, even as it tackles other topics clustered under three key parts—“The Teacher Taught,” “The Terrors of a Free Press,” and “The Fourth Estate.”

Dean Teodoro points out: “Journalism teaching is about teaching skills, but it is also about teaching the kind of respect for the facts that drives the best journalists to scour musty libraries and to go over government archives, to spend hours surging the Net, and to interview dozens of people to obtain information—and then to double check its accuracy.”

Any leader-executive who reads this will have a newfound respect for the media person interviewing him or her.

And yet, that media person must seriously consider following the “Louie Teodoro Imperative, if I may say so.

One observer commented: “Nowadays, we have “press conference journalists”—they rely on the press kits, pick up some points from prepared statements —and they submit their story. That wouldn’t pass— with Dean Teodoro.

In an extended discussion on the “Terrors of a Free Press,” the Dean pointed to scary statistics on journalists killed in various parts of the country, while many more of them are threatened with being jailed or oppressed. “Living dangerously” has come to describe the journalistic profession, and Dean Teodoro underscores the need for government for a tough policy to protect journalists.

The book covers academically preparing journalists, empowering them for practice, and protecting them as they do their alternately interesting and dangerous jobs.

The book criticizes government and state policies that continue to be ambivalent about fully supporting the Fourth Estate.

The book frowns on censorship of any kind from the ruler, and cites the threats to press freedom by the conglomeration of ownership by businessmen.

Journalists are not your usual employees who churn out and sell products; render professional services.

They are workers all right, and yet their purposes and mission are latched on to the higher ideals of a democracy where freedom is defended, not by the sword but by the pen.

This book’s essays are clear-minded, lucid and honest simply because the author is a high-caliber writer and thinker whose passion and love for journalism rings true in every page.

Don’t believe your PR man who tells you how easy it is to get your story published, because he holds these journalists by the neck.

These journalists, with some exceptions, love and are always ready to defend their higher calling.