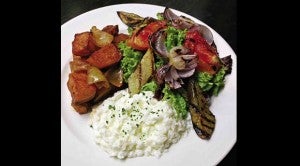 The breakfast meeting is essential for many management committees as well as executives wanting to squeeze in that tête-à-tête with the corporate lawyer or prospective client or manager. Many are held in hotel lobbies and sports clubs. But are there options outside of the hotel aside from Starbucks? Here are a few:

If your breakfast meet is in Quezon City, Mom & Tina’s would be your best bet (or at least this is my favorite breakfast meeting place in QC). This adorable country-themed bakery and cafe started out as a mother-daughter project of “Mom” Belen Vergara Torres and “Tina” Torres-Santos. But due to popular demand, it has expanded with branches in Pasig, Katipunan, Sgt. Esguerra behind ABS-CBN and Dela Rosa in Makati.

It is known for its sweets—it is a bakery after all—such as the Baked Oreo Cheesecake and the Beehive, a cupcake with marshmallows and coated with chocolate. But who has that for breakfast? Not to worry, the breakfast menu is also delish. The US Beef Tapa is hearty and packed with flavor. It also offers smoked bangus, bacon and eggs with hash browns, and waffle pancakes. 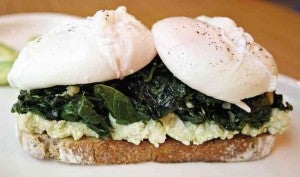 Pancake House has been an all-time favorite of our family. My generation grew up with its blueberry pancakes and golden brown waffles.

Now that it has franchises across the country, it has opened an upscale all-day breakfast place called Maple. Its first branch was at the San Antonio Plaza across the Forbes Park Santuario and was an immediate hit, always packed. But for those who work in the Ortigas area, not to worry, it also has a branch at the Shangri-La East Wing. And for those from the State of Alabang, it also opened at Commerce Center. 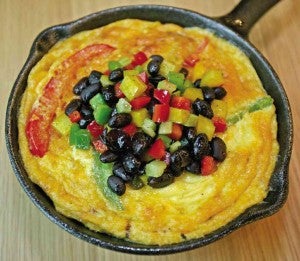 Instead of just pancakes, it offers buttermilk pancakes, although ironically, the most popular item on the menu is not pancake doused in maple syrup. The restaurant has become just as popular for its Prime Rib Tapa, a huge slab of rib with the flavors of the favorite Pinoy breakfast tapa.

Another plus factor for Maple: champorado.

For a high brow executive meet, choose Madison’s. This restaurant has taken the place of the old Fully Booked at the back entrance of Edsa Shangri-La.

It is better known as a fine dining restaurant but it recently opened to accommodate breakfast, mostly for executives who are looking for an alternative to hotel coffee. 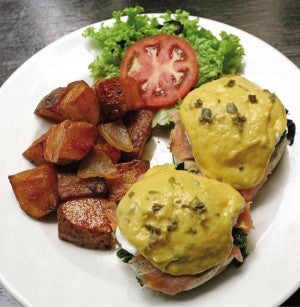 It has a deli attached to the resto where it sells salami, pastrami and homemade Italian sausages by its Italian chef. From these, it makes amazing sandwiches.

For those who work in the Ortigas area, this is another option. Brasserie Cicou is the French restaurant created by Chef Cyrille Soenen and wife Anna. It is known for the authentic French dishes and that famous dessert, the Kouign Amann, a buttery roll topped with ice cream. Recently, it decided to open for breakfast as well, so if you feel like having an authentic French breakfast, this is the place for you. For meetings, it’s perfect as it is quiet, with lots of space and Wi-Fi.

Apartment 1B is a cozy restaurant that started out in Salcedo Village but a few years ago expanded to One Rockwell.

I confess to being obsessed with its Eggs Hemingway (eggs benedict but with salmon instead of ham). It also has a mean egg white scramble. And if you have a brunch meeting, try the turkey burger, which I was obsessed with in the 10 years that I did not eat pork and beef. 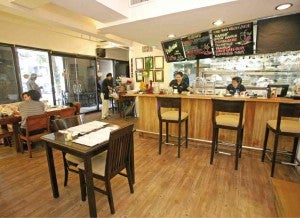 This restaurant has consistently been one of the best for comfort food. The servings are large, the flavors are perfect, so the prices are a bit on the high end, but it’s always worth it.

Kitchen 1B is Apartment 1B gone organic. Whether you need to or just want to go organic for health purposes, Kitchen 1B is the restaurant for you. Mind you, this is not a veggie store. The message at this restaurant is that you can eat the same items you would eat when you were being an unhealthy eater, except this time, the source of the ingredients is organic. Think organic eggs, organic poultry, organic beef.

Order the poached eggs and kale for a quick breakfast. Or indulge yourself in blueberry oatmeal pancakes. 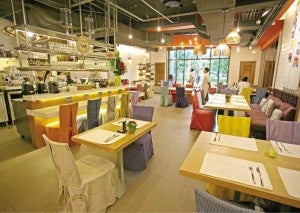 Techie executives might also get a kick out of the fact that the menus here are no longer printed on paper but on tablets. (Although there is the option for a printed menu if you can’t work a tablet).

Old Swiss Inn has been around since 1946 but its Reuben sandwich, corned beef and cheese fondue are still the best in the country today. The good news: this restaurant is open 24 hours. For breakfast, it offers a buffet (perfect if your team is comprised of heavy eaters!). In Makati, it is right next door to the Peninsula so it’s literally a close alternative to a hotel lobby breakfast meeting venue.

Over at Fort Bonifacio, the most popular breakfast place is Wildflour Bakery and Cafe. There is also a branch at Podium and—good news for Makati peeps—it has also opened a branch at Salcedo Village.

Wildflour became famous when it introduced the cronut to the Philippine market. But its breakfast options go beyond this trendy dessert.

It has great breads and several options to pair with eggs on toast: bacon gravy, Mexican chorizo, smoked salmon or ham and mushrooms. For healthy eaters, there is granola with Greek yogurt. Wildflour has German pancakes and Belgian waffles. For the heavy breakfast eaters, there is steak and eggs. No tapsilog here but it does have a unique dish with the meat-eggs-rice combination: braised beef short ribs with kimchi fried rice and eggs. Tapsilog Gangnam style. Sooo good.

Truth be told, breakfast meetings can be a pain, especially if you are not a morning person. The sunny side up: you can make it worth it with a good meal. Rise and shine!