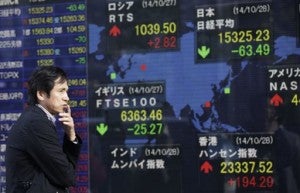 A man looks at an electronic stock board of a securities firm in Tokyo on Oct. 28, 2014. Asian stocks were mixed Thursday, Oct. 30, while the dollar resumed its upward march against the yen after the Federal Reserve wound up its vast bond-buying scheme and reiterated its plan to keep interest rates at record lows. AP PHOTO/EUGENE HOSHIKO

HONG KONG–Asian markets were mixed Thursday while the dollar resumed its upward march against the yen after the Federal Reserve wound up its vast bond-buying scheme and reiterated its plan to keep interest rates at record lows.

After a two-day meeting the US central bank’s policy committee said it would bring an end to six years of monetary easing as the economy gets back on track.

And to reassure investors worried about the global economy, it also said it would keep near-zero interest rates for “a considerable time” after the end of the quantitative easing program, sticking to its timetable of an increase well into 2015.

However, while the decision was widely expected, its optimistic comments on the state of the jobs market were considered by analysts to be more hawkish than in the past, fuelling speculation of a possible earlier rate hike.

“The Fed is positioning itself, but it hasn’t taken the decision” to raise rates, said Gregori Volokhine, president of Meeschaert Capital Markets. “Its action still depends on how the economy performs.”

Traders will be keeping a close eye on the Fed’s moves over the next few months, with fears that a hike too early could hurt overseas economies.

World markets took a beating earlier this month on fears about the global outlook, with China, Japan and the eurozone still struggling, despite the pick-up in the United States.

Wednesday’s announcement sent the dollar surging on expectations for higher interest rates down the line, while the end of Fed bond-buying means there will be less cash swirling around the economy.

The greenback also surged against the Australian dollar. In afternoon trade the Aussie bought 87.65 US cents, compared with 88.66 cents on Wednesday.

On Wall Street the three main indexes ended lower after clocking up a string of healthy gains over the past week and a half.

In oil trade US benchmark West Texas Intermediate for December delivery eased 64 cents to $81.56 while Brent crude fell 71 cents to $86.41 in afternoon trade.