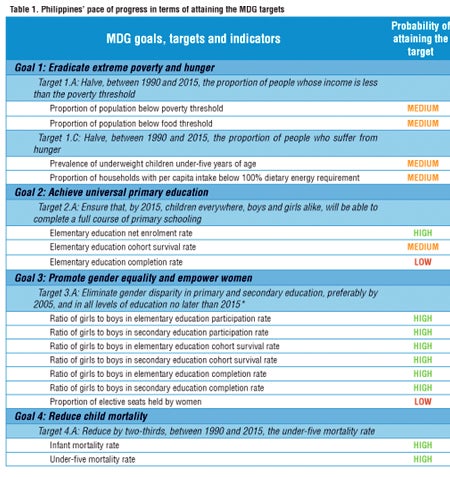 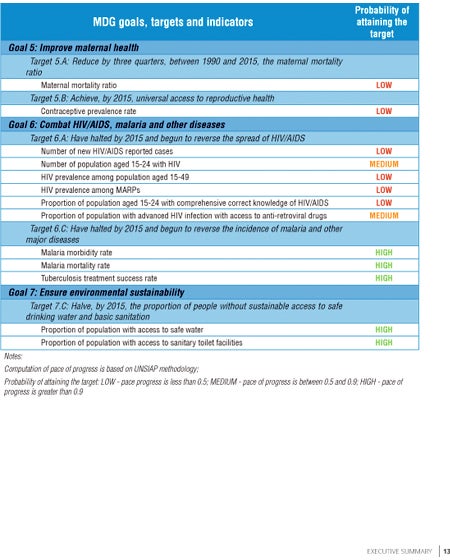 MANILA, Philippines – The Philippines is likely to achieve only about 60 percent of the 35 Millenium Development Goals (MDGs) before the 2015 deadline, a United Nations Development Program (UNDP) representative said during the release of the 2014 MDG Progress Report.

“It is a comprehensive and transparent report, presenting significant achievements alongside disappointing misses,” Luiza Carvalho, UN Resident Coordinator and UNDP Resident Representative in the Philippines, said in her opening remarks Wednesday.

“Ultimately it assessed that the chances of the Philippines attaining the MDGs by 2015 from fair to high for about 60 percent (21 out of 35) of the MDG targets,” she said.

The MDGs are a set of targets on various sectors such as health, poverty, education, gender equality that countries worldwide are urged to achieve.

The Philippine has a high probability (90 percent and above) of achieving targets on improving school participation, empowering women, reducing deaths among children, deaths caused by diseases such as Malaria and Tuberculosis, and improving people’s access to safe water and sanitary toilet facilities.

There was a low probability (50 percent and below) in achieving targets on reducing maternal mortality, increasing access to reproductive health, fighting the spread of HIV/AIDS, and improving the number of students who will finish highschool.

“In general, Philippines has been presenting consistent progress [towards achieving MDGs] since the beginning of the present administration,” Carvalho said.

She however pointed out the need for improving disaster risk reduction initiatives to ensure that natural calamities did not destroy much of the progress achieved by government agencies.

PH on track but has yet to address poverty, underemployment