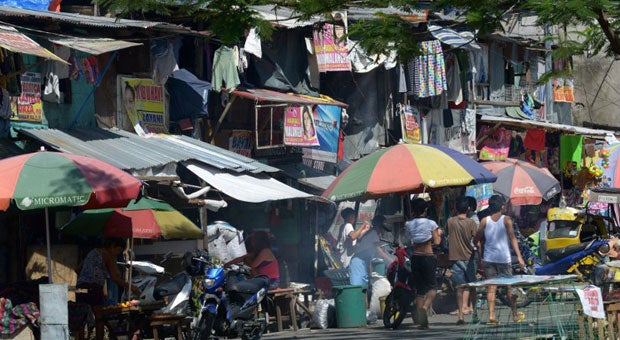 Pedetrians walk past houses in a shantytown in Manila on July 5, 2013. The government has conceded that the Philippines will miss its 2015 Millennium Development Goal on poverty reduction. AFP PHOTO/Jay DIRECTO

MANILA, Philippines—The government has conceded that the Philippines will miss its 2015 Millennium Development Goal (MDG) on poverty reduction.

Under the updated medium-term Philippine Development Plan, the government has reset its poverty rate target to a range of 20 to 23 percent by 2015, or higher than the 16.6 percent committed under the MDG.

The MDG is a set of commitments made by member-countries of the United Nations. One of these is halving poverty incidence from the level in the 1990s.

“It is already a given that we are likely to miss out the MDG of reducing poverty to 16.6 percent next year,” Economic Planning Secretary Arsenio Balisacan, director general of the National Economic and Development Authority (Neda), said yesterday in a speech during the general membership meeting of the Management Association of the Philippines (MAP).

However, he said the government was keen on implementing new strategies to significantly reduce poverty in the remainder of the Aquino administration.

By 2016, the Aquino administration is committing to reduce poverty incidence to 18 to 20 percent.

The Philippines’ poverty rate in 2012 remained one of the highest in Asia despite the fact that the country registered an economic growth rate of 6.8 percent, one of the fastest in Asia.

Economists said measures to boost investments that were labor intensive and could provide jobs for the poor were needed for the country to achieve inclusive economic growth.

Balisacan said that concerned government agencies have agreed to coordinate more closely for a successful implementation of the updated PDP, which could substantially reduce poverty.

“Implementation of the plan calls for the convergence of agencies in the different areas. It also calls for the participation of the private sector and development partners [so that the PDP will have] a considerable impact,” he said.

Under the PDP, the government aims to invest heavily in skills training to improve the ability of more people to get hired in high-quality jobs.

In particular, the government wants to train more people on skills needed by the manufacturing sector.

Balisacan said that unlike other sectors, manufacturing has the ability to create a substantial number of job opportunities for the poor.

Also under the PDP, the government commits to spend more on infrastructure, including farm-to-market roads as well as those needed to boost tourism in priority areas, to boost investments, economic activities and employment.

Poor infrastructure has often been cited as a key reason why the Philippines lags behind most of its neighbors in terms of the amount of job-generating foreign direct investments.

At present, public infrastructure spending in the Philippines stands below 3 percent of gross domestic product (GDP). The government intends to increase this every year until it hits at least 5 percent—the average in Southeast Asia—by 2016.

PH on track but has yet to address poverty, underemployment

30 poorest provinces to get more funds–Aquino

Your subscription could not be saved. Please try again.
Your subscription has been successful.
Read Next
Economy seen growing by 7.5-8% this year
EDITORS' PICK
Omega Speedmaster super racing: Tiny device massive change
Makabayan bloc blasts bid to expand US access to more military bases in PH
Philippine-United States alliance ‘rock solid’ — DFA
vivo Philippines offers a free bouquet of flowers and a premium necklace perfect for Valentine’s Day
Fuel price rollback expected on Feb 7
House energy committee chair Arroyo bats for cheap electricity
MOST READ
Vice Ganda gets called out for ‘unfair treatment’ of ‘It’s Showtime’ co-host Karylle
Fuel price rollback expected on Feb 7
Pokwang tells self amid revelations on past relationship: ‘Bangon, nanay ka’
Kris Aquino gets ‘renewed confidence’ after consultation with new doctor: ‘I have a strong chance of getting better’
Don't miss out on the latest news and information.