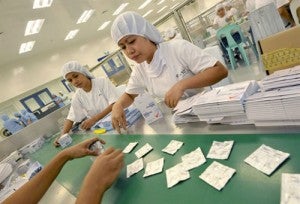 The United States has terminated its review of the country’s labor rights situation, thus removing any potential barriers to the Philippines’ eligibility to avail itself anew of the benefits under the US Generalized System of References. AFP FILE PHOTO

MANILA, Philippines—The United States has terminated its review of the country’s labor rights situation, thus removing any potential barriers to the Philippines’ eligibility to avail itself anew of the benefits under the US Generalized System of References (GSP).

“With the closure of the country review on labor rights, there is no longer any threat to Philippine exports entering the US market under the GSP,” Trade Undersecretary Adrian S. Cristobal Jr. said in a text message.

In a separate text message, Trade Secretary Gregory L. Domingo noted that this termination meant that the Philippines can be part of the GSP program if and when extended by the United States.

The renewal of the US GSP program is under review by the US Congress and chances are good that it will be extended, Domingo added.

The renewal or resumption of the GSP program, which expired on July 31, 2013, is said to be crucial for the Philippines, as this alone is expected to secure some $1 billion in export revenues for the country.

The Philippines is one of about 120 developing nations allowed to export certain goods to enter the US duty-free.

In a separate interview, Trade Assistant Secretary Ceferino Rodolfo said the US move to terminate the review on the country’s labor rights situation meant that the US “saw the seriousness of the Philippine government to address the issues that they raised.”

“They have essentially recognized that the Philippine labor practices are up to international standards and that we are complying with our commitments,” Rodolfo added.

In July 2008, the USTR said it would keep the Philippines under “active scrutiny” for possible violation of international labor standards due to its “no union, no strike” policy in special economic zones that allegedly led to the rise in killings of labor leaders between 2001 and 2007.

This decision stemmed from a petition by the International Labor Rights Forum (ILRF) in June 2007 requesting a USTR inquiry into whether the Philippine government has ensured that all Filipino workers enjoyed the right to freedom of association.

US law reportedly requires that a country afford its workers’ “internationally recognized worker rights,” including the right to freedom of association, to participate in its GSP program.

In June 2013, the USTR placed the country’s worker rights practice on continued review.