Dow closes at all-time high after US Fed decision 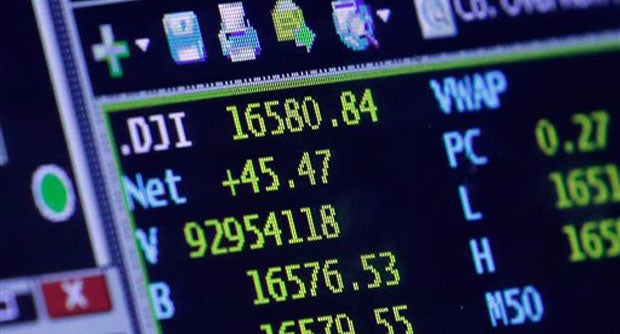 A screen at a trading post on the floor of the New York Stock Exchange shows the closing number for the Dow Jones industrial average Wednesday, April 30, 2014. The DJIA closed at an all-time high, with a gain of 45 points to 16,580, four points above the record high it set on Dec. 31. AP

NEW YORK—The Dow Jones Industrial Average Wednesday closed at a new record after the Federal Reserve said the US economy was picking up following a winter slowdown.

The Fed, concluding a two-day policy meeting, said economic activity “has picked up recently after having slowed sharply during the winter in part because of adverse weather conditions.”

The central bank, as expected, continued a plan to gradually taper its bond-buying stimulus program, while maintaining ultra-low interest rates.

The Fed’s positive outlook outshone a disappointing report from the Commerce Department, which said gross domestic product grew by a scant 0.1 percent annual rate in the first quarter.

But Stovall cautioned that weakness in the Nasdaq, if it persists, “could have a dampening effect.”

James said the continued weak performance of the Nasdaq diminishes the significance of the Dow record. “I don’t think it matters that much,” he said.

Twitter closed at a record low of $38.97 after the company disclosed that it had 255 million active monthly users in March, below the 257 million projected by Wall Street, according to BMO Capital Markets. Shares tumbled 8.6 percent.

Investors also turned against online retail giant eBay, which reported a loss of $2.3 billion on a large tax charge and projected second-quarter profit of 67-69 cents per share, below the 70 cents expected. Shares dived 5.0 percent.

But Time Warner got a lift after reporting earnings of $1.3 billion, 71 percent above the year-ago level and better than analysts expected. Shares rose 2.7 percent.

Bond prices rose. The yield on the 10-year US Treasury fell to 2.65 percent from 2.70 percent Tuesday, while the 30-year slid to 3.46 percent from 3.49 percent. Bond prices and yields move inversely.