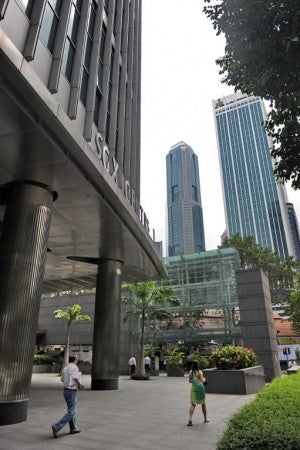 People walk past the Singapore Exchange Limited (SGX) building in Singapore on April 30, 2014. A dearth of big-name share listings of overseas firms and a multibillion-dollar penny-stock crash have hampered the growth ambitions of Singapore’s stock exchange as Asian rivals flourish, analysts say. AFP

That, market observers say, highlights the bourse’s main problem—soft volumes, which make it less attractive for fresh share offerings from around Southeast Asia.

To compound its woes, sentiment was hit when three penny-stock companies—Asiasons Capital, LionGold Corp. and Blumont Group—suffered a rout in October that wiped around Sg$8 billion (US$6.4bn) from their value in two days after a huge rally.

In a statement accompanying its latest earnings report, SGX said despite continuing weakness it is “confident that our securities market will recover over time and we remain committed to our long-term strategies.”

While its major players include state-linked firms such as Singapore Telecom, DBS Bank and Singapore Airlines, the bourse says 40 percent of its listed companies are foreign.

“Retail investors are also concerned after the October penny stock crash. Penny stocks have historically been a sector in local markets that offered high returns and drive volume,” he told AFP.

The central bank, the Monetary Authority of Singapore (MAS), and the police white-collar crime unit are investigating possible trading irregularities that could have led to the crash.

MAS and SGX have mooted sweeping regulatory reforms in the wake of the scandal, including minimum trading prices for mainboard shares, short-selling reporting and collateral requirements for securities trading.

However, Chua said new companies looking to list may view the flagged curbs as onerous.

“IPOs could be affected with the regulatory changes. As it is, we have had only two big ones this year and there don’t seem to be many in the pipeline,” he said.

Those that have listed recently have been relatively small.

A total of $5.17 billion in IPO equity funds were raised on the SGX in 2013. But that compares with $21.77 billion in Hong Kong and $10.15 billion in Tokyo, while it was only marginally higher than $5.09 billion in Bangkok, according to Dealogic data published on the Hong Kong Stock Exchange website.

In terms of average daily trading value, the SGX ranks ahead of Bursa Malaysia and the Indonesia Stock Exchange, but is behind the Stock Exchange of Thailand (SET).

The exchange has also missed out on listings in the past, namely English football giants Manchester United, who decided against an IPO in the city in 2012 owing to weak demand. Instead the club opted for the New York Stock Exchange.

And Formula One boss Bernie Ecclestone has delayed on a number of occasions a multibillion-dollar IPO, although he has said it will go ahead “when we think the time is right.”

Benjamin Ong, an investment analyst at Phillip Securities, said: “Trading liquidity in part determines the attractiveness of choosing to list in Singapore.”

Further dampening the SGX’s prospects, say Ong and Chua, could be a plan to allow cross-trading between Hong Kong and Shanghai’s stock markets.

And Ong said the city’s global reputation for being business-friendly and its position as a hub for fast-growing Southeast Asia put the bourse on a firm footing in the long term.

“Singapore’s economic conditions and political stability continue to make the SGX attractive, and it should continue focusing on the Asean (Association of Southeast Asian Nations) growth story,” he said.—Bhavan Jaipragas