Increased spending on reconstruction in Visayas
By: Paolo G. Montecillo - @inquirerdotnet
Philippine Daily Inquirer / 04:00 AM May 01, 2014 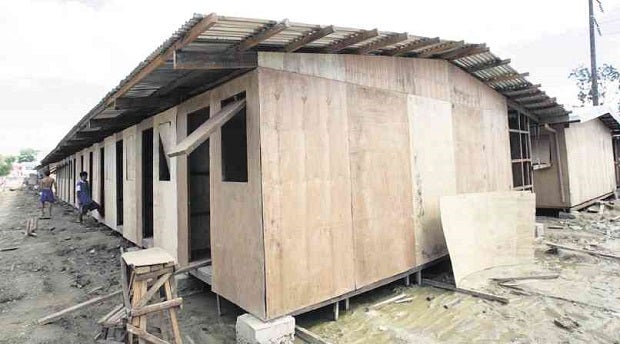 File photo shows bunkhouses being built in Barangay Caibaan,Tacloban City. On the back of accelerated spending on infrastructure projects mainly in areas affected by Super Typhoon Yolanda, the government’s budget shortfall rose by more than a quarter in the first three months of the year. Photo by NINO JESUS ORBETA

MANILA, Philippines—The government’s budget shortfall rose by more than a quarter in the first three months of the year on the back of accelerated spending on infrastructure projects mainly in areas affected by Super Typhoon “Yolanda.”

Documents released by the Department of Finance (DOF) Wednesday showed a wider gap between state revenues and expenses in the first three months despite significant increases in collections by the government’s main money-making agencies.

“The year-on-year improvements we’re so far making on government spending are particularly obvious in the deficit and disbursement levels for March,” Budget Secretary Florencio Abad said.

For March, the government’s deficit rose by 14 percent to P40.5 billion, bringing the first-quarter shortfall to P84.1 billion, up 27 percent year on year.

Net of interest payments, the state registered a primary surplus of P9.4 billion, down 2.5 percent from the same period last year.

Despite the higher deficit for the period, the government still fell short of its goal for the year largely as a result of lower-than-target spending. The deficit was 42 percent lower than the goal of P145.85 billion, a result mainly of lackluster spending. Expenditures were 16 percent or 91.81 billion lower than the programmed level for the period. Revenues were also below target, but by a smaller 7 percent.

Abad said the lower-than-target spending for the quarter was partly a result of more “efficient” spending on the government’s part.

“Altogether, we expect more efficient spending in the coming months so that agencies can implement their programs quickly and ensure that key services are promptly delivered to the public,” he said.

For March alone, revenue collections were up 14 percent to P129.3 billion from a year ago. The Bureau of Internal Revenue (BIR) cornered the bulk, contributing P82.2 billion for the month, up by a tenth from last year.

The Bureau of Customs, meanwhile, sustained its strong performance as collections rose 34.4 percent to P29.3 billion. The Bureau of the Treasury raised P7.8 billion for the month, P782 million or 9 percent lower year on year.

However, the BIR and Customs have been missing their monthly targets.