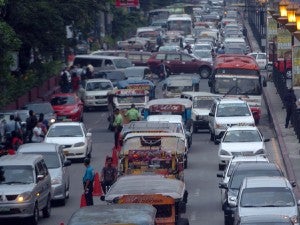 MANILA, Philippines—The level of car ownership in the Philippines is among the lowest globally, with an estimated 47 percent of Filipino households not owning their own cars—the fifth lowest globally—according to a study by the market research firm Nielsen.

However, the latest edition of the Nielsen Global Survey of Automotive Demand revealed that local consumers are showing strong intentions of purchasing a new car that will drive much of the local automotive demand in the coming two years.

“Automotive demand in the Philippines has been relatively low and for many households, owning a car has been financially out of reach,” said Nielsen Philippines managing director Stuart Jamieson in a statement.

He stressed, however, that Nielsen’s study pointed to “a more robust automotive demand in the coming years as more households join the middle class and reach the financial means to make their first car purchase.”

Despite the low ownership level in the country, Filipino consumers join Indonesians and Thais, all ranking in the top 10 countries globally for intention to acquire a car within the next two years.

The study revealed that 81 percent of Indonesian consumers and 79 percent of Thai consumers intend to acquire a car within the next two years, as do 76 percent of Filipinos, compared to just 65 percent globally.

In terms of how they view their cars, Filipino car owners are almost as pragmatic as their Singaporean counterparts. Eighty-eight percent of Singaporeans view their car as a tool to get them where they are going, followed by 87 percent of Filipinos and Indonesians, 85 percent of Malaysians and 82 percent of Thais.

Many Southeast Asian car owners also believe their car is an important symbol of the success they have achieved in life, and the Philippine market along with two other Southeast Asia markets ranked in the top 10 countries globally when it came to viewing their car as a status symbol.