How author of best-seller exposed ‘one percent’ economic elite 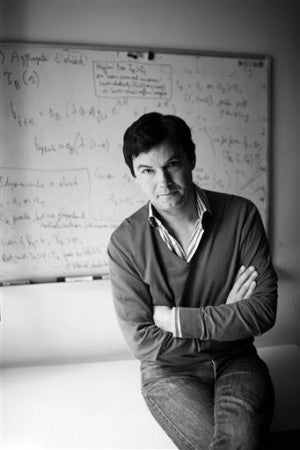 WASHINGTON  — French economist Thomas Piketty and his research partners have transformed the wealth gap debate by popularizing the concept of a financially elite 1 percent.

They framed the issue of income inequality in terms that ordinary people could grasp. Using tax records, they drilled into how much money it took to belong to the 1 percent and what share of personal income this group controlled.

That idea became a rallying cry of the 2011 “Occupy Wall Street” movement. At the time, politics in the United States overshadowed the data that Piketty had unearthed. That is, until last month, with the publication of Piketty’s new book “Capital in the 21st Century.”

Piketty has documented that an increasingly small fraction of the population receives a growing share of America’s riches.

About 22.5 percent of U.S. personal income in 2012 went to the top 1 percent, the most since 1928. That sounds like a lot. It is. But the concentration is far greater at the top 0.01 percent. That tiny cluster controls nearly 5.5 percent of all income — a larger share than at any point dating to 1913. That happens to be the year the 16th Amendment to the Constitution was ratified, allowing for Congress to collect income taxes.

For the bottom 90 percent of Americans, by contrast, average incomes after inflation have grown by a factor of just three since 1917 and have actually fallen for the past 13 years.

Before Piketty and his fellow researchers produced their research, economists relied on less precise indicators of inequality.

For example, there’s the “Gini index.” The name comes from Corrado Gini, an Italian statistician who developed the idea in 1912. The index measures income distribution on a scale of 0 to 1. A zero means everyone has the same income. By contrast, a 1 indicates that all income belongs to a single individual.

The Census Bureau says the United States has a Gini index of 0.48, up from 0.40 in 1967. But without the tax data pioneered by Piketty and others, it would be harder to determine what that change signifies. On its face, the slight increase masks just how much money has accrued at the top 0.01 percent.

All the figures from Piketty are available online for free at “The World Top Income Database.” It lets users see the wealth gap in several countries: China, France, Indonesia, Norway and Uruguay, among others.

Farmers and the ‘one percent

Diego Rivera and the one percent