With no solution in sight for Thailand, investors look to PH, Indonesia 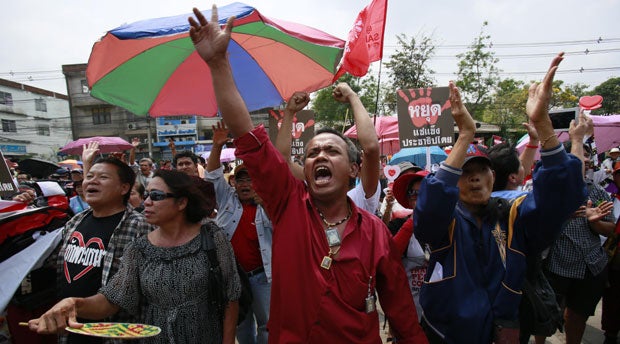 Protesters chant slogans in support of Prime Minister Yingluck Shinawatra and her government outside the gate of the National Anti-Corruption Commission office in Bangkok, Thailand, Thursday, Feb. 27, 2014. AP

BANGKOK—Foreign investors prefer Indonesia and the Philippines right now as they do not see any sign of a solution to Thailand’s political crisis, Chua Hak Bin, Asean economist at Bank of America Merrill Lynch, told The Nation during an exclusive interview.

“If you had put your money into Indonesia or Thailand five years ago, you would have tripled your investment by now, and it was the same for the Philippines. These were the three best-performing markets in Asia,” he said. However, investors who put their money into China five years ago were lucky if they broke even.

But the situation has changed. Looking forward to the next five years, Thailand is no longer attractive to investors, Chua said.

Three key factors make the economic outlooks of the Philippines and Indonesia much better than Thailand’s. These are stable politics, lower levels of debt, and large labor forces, said Chua, head of economics research for emerging Asia at Merrill Lynch (Singapore).

Foreign investors are finding it hard to understand the political situation in Thailand fully, he said. “They worry that the political stalemate may drag on indefinitely.”

He said everyone was waiting for the end of the political crisis, which is undermining the proper functioning of the government.

“We have seen growth collapse in the fourth quarter last year,” Chua said, referring to a sharp slowdown of consumer spending and investment.

The conflict now has dragged on for nearly four months, and some are even wondering if it will last until the second half of the year. There is speculation that an interim government may be formed midyear, and this might provide some relief. But it would raise questions of how long such a government would last, he said.

So far the year the Indonesian and Philippine stock markets have risen by about 7 per cent, while the Stock Exchange of Thailand has been flat.

“If some end games are in sight, the Thai stock market could catch up with these markets. It could go up by 5 per cent, but it is a big if,” he said.

Indonesia will have a legislative election in April and a presidential election in July. But it is unlikely to experience the kind of political unrest that Thailand is facing now.

“The second [factor] is the balance sheet: Indonesia’s leverage is very low,” he said.

Among Asean economies, Malaysia ranks first in household debt at 86.1 per cent of GDP and Singapore third at 77.1 per cent, while Thailand is between those two.

The third factor is demographic change. Shrinkage of the working-age population will have an impact on Thailand’s competitiveness. As growth of the working-age population in Thailand between 2013 and 2023 will turn negative, that contrasts with high growth rates of more than 20 per cent in the Philippines and 15 per cent in Indonesia, according to estimates by Bank of America Merrill Lynch Global Research.

To boost economic growth, Chua expects the Bank of Thailand’s Monetary Policy Committee at next month’s meeting to cut the benchmark interest rate by 25 basis points, from 2.25 per cent currently to 2 per cent. Inflation is not a cause for concern, he said.

He does not think the BOT will worry much about a weaker baht and the possibility of capital flight. The central bank will be comfortable with a weak baht, which will boost exports, given that domestic demand is so weak. As foreign capital has stopped coming into Thailand, “We’re not worried about capital flight, but if there is such flight it is because of politics, Thais taking their money out,” Chua said.

Regarding the impact of the US Federal Reserve’s scaling back its bond-buying program, Chua said that under the leadership of Janet Yellen, the Fed’s newly appointed chairwoman, tapering of its quantitative-easing policy would be very gradual, and the first increase on the federal funds rate would be in 2016.

Yellen will look at broader economic indicators, no longer relying on the goal of a 6.5-per-cent unemployment rate, since the drop in the US jobless rate has been partly caused by many people giving up looking for work, leading to a lower labor-participation rate.

East Asia and developed markets such as Europe and the United States remain promising as Europe has come out of recession, and the US economy is expected to accelerate after April as pent-up demand bounces back from the effects of severe winter weather.

Though the Dow Jones Index often hits a new record high, Bank of America does not think the US stock market is in a bubble, as the recovery is in an early stage, so valuation is not too demanding.