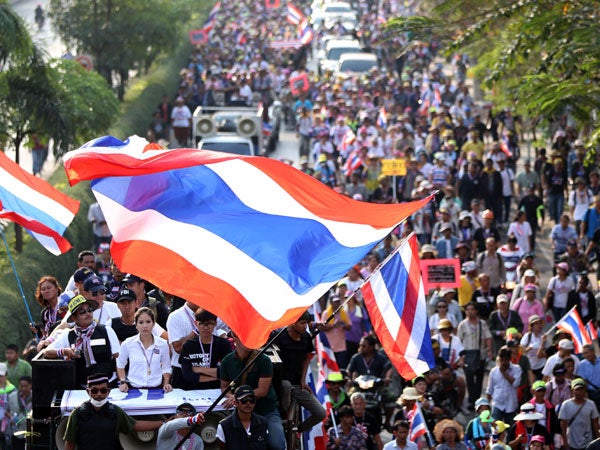 Thai anti-government protesters march during a rally on a street outside the prime minister’s office of government house in Bangkok, Thailand Monday, Feb. 17, 2014. Thailand’s economy grew 0.6 percent in the final three months of 2013 compared with the same quarter a year earlier, data showed Monday, as political turmoil hit consumer confidence and tourism. AP

With no end in sight to more than three months of anti-government protests, the National Economic and Social Development Board (NESDB) also trimmed its growth outlook for 2014.

The fourth-quarter gross domestic product growth figure represents a sharp slowdown from the 2.7 percent year-on-year expansion in the previous quarter.

It was the fourth straight quarter of slowing growth in the kingdom and meant that overall the Thai economy expanded at a weaker-than-expected 2.9 percent across 2013, the board said.

“The Thai economy in 2014 will grow in the range of 3.0-4.0 percent,” NESDB said, lowering its forecast range by one percentage point.

Daily political protests have continued despite a general election on Feb. 2.

Eleven people have died and hundreds of others have been injured in political violence linked to rallies in Bangkok, while a self-styled “shutdown” of key junctions across the city by anti-government demonstrators continues.

The polls were widely disrupted by protests and there have been no conclusive results, leaving a caretaker government with limited powers in office.

The NESDB said tourism was hit by travel warnings from several foreign governments in the second half of 2013—although visitor numbers were still higher than the previous year.

“The number of foreign tourists in 2014 is expected to reach 27.5 million, an increase of 3.0 percent from 2013,” the statement said, adding that the number was half a million fewer than previous forecasts.

Analysts warned of more trouble for the economy ahead without a resolution of the festering crisis.

Spending restrictions on the caretaker government “leave it with limited ammunition to boost the economy”, Capital Economics said in a briefing note.

It said consumer and business confidence were likely to wane further, while major government spending plans have been put on hold.

“We doubt full-year growth can exceed three percent and downside risks are rising fast,” it added.