Yellen to give 1st public comments as US Fed chair 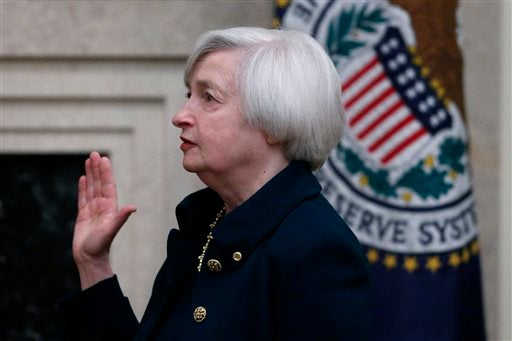 Investors this week will try to determine whether Yellen will embrace all the policies of her predecessor, Ben Bernanke. They will also look for any clues that she is worried about the economy or the stock market’s turbulence.

Yellen will deliver the Fed’s twice-annual report to Congress, starting Tuesday before the House Financial Services Committee and then Thursday before the Senate Banking Committee.

Her testimony will likely have a single overarching point: The Fed will keep all its options open depending on how the economy evolves.

After a rocky 2014 so far, nervous investors want to know whether Yellen might deviate from the message the Bernanke Fed sent late last year: That Fed officials think the economy’s outlook is bright enough to withstand a slight pullback in their stimulus but that rates should stay low to fuel a still-subpar economy.

Next month, she’ll preside over her first Fed meeting and hold her first news conference.

Yellen, 67, the first woman to lead the Fed in its 100 years, was sworn in Feb. 3 for a four-year term. As vice chair for three years and long a leading economist, she has given speeches and addressed congressional committees.

But as Fed chair, considered the world’s most powerful economist post, the spotlight will burn much brighter.

Below are issues Yellen will likely be pressed on this week. For each issue, here is what investors would like to hear and what Yellen is likely to say.

—Investors: The Dow Jones industrial average has sunk nearly five percent this year in part because sectors of the economy like manufacturing have shown signs of weakening. Investors worry that 2014 may not be the breakout year for the economy that many had foreseen. They hope Yellen will signal that she expects a more robust economy in 2014 after four-and-a-half sluggish years of recovery from the Great Recession.

—Yellen: She won’t likely disappoint. It’s the nature of Fed leaders to err on the side of optimism. A downbeat message could derail confidence and potentially send markets tumbling. Yellen will probably refer to what the Fed said in a policy statement last month: Encouraging trends in consumer spending and business investment suggest that growth was picking up—at least before 2014 began. Yellen will surely be asked about the January jobs report, which showed lackluster hiring for a second straight month. She may stress the solid hiring in sectors like manufacturing and construction.

—Investors: Investors have yanked money from emerging economies from Turkey to Argentina. They’ve done so in part because they fear that a pullback in the Fed’s stimulus will send U.S. interest rates up and draw investor money from overseas in search of higher returns. Currency and stock values in emerging markets have dropped. The Fed made no mention of this development in its most recent policy statement, leaving investors unsure how concerned Yellen and the Fed might be.

—Yellen: She may point out that some developing nations have moved to support their currencies by boosting rates and pursuing economic reforms. She may also note a sometimes-forgotten fact: That the Fed’s mandate is to maximize employment and keep prices stable in the United States, not the rest of the world. But Yellen will likely assure investors that the Fed is monitoring emerging markets for any signs that turbulence there might be harming the U.S. economy.

—Investors: The Fed said in December that it would start paring its monthly bond purchases in light of steady economic gains. The purchases have been intended to keep loan rates low to spur spending and growth. The Fed’s pullback has unnerved some, who note the anxiety it’s sparked in overseas markets. They also wonder if the Fed should delay any further cutbacks in its bond purchases until hiring accelerates. Will the Fed reduce its stimulus throughout 2014 even if the economy falters? Investors want to know that the Fed’s pullback isn’t on automatic pilot.

—Yellen: She’ll likely provide such assurance. Expect her to invoke language the Fed has stressed: That its reductions in bond purchases are “not on a preset course” and depend on how the economy and job market fare. On the other hand, Yellen won’t likely dampen expectations that the Fed will keep trimming its purchases if the economy improves. She’ll want to signal flexibility without raising false hope that the bond purchases, which have boosted stock prices, will continue indefinitely.

—Investors: Financial markets would like Yellen to stress explicitly that the Fed won’t start raising its benchmark short-term rate any time soon. That rate has been near zero for five years.

—Yellen: She’ll likely give investors the message they want. The Fed has said it expects to keep short-term rates at record lows “well past” the time unemployment falls below 6.5 percent. The rate is now 6.6 percent. Yellen could note that fact and explain that the Fed won’t rely solely on the unemployment rate to determine when to start raising interest rates. The unemployment rate has dropped in part because many people without jobs have stopped looking for work and are no longer counted as unemployed.

—Investors: Many would like assurance that the Fed is monitoring threats posed by its enormous holdings of Treasury and mortgage bonds. The Fed’s investment portfolio has swollen to a record $4.1 trillion. Some investors fear that all the money the Fed has pumped into the financial system might be inflating dangerous bubbles in assets from stocks to real estate. Some also worry that once the Fed starts to sell its investments, it could destabilize financial markets.

—Yellen: She’ll likely defend the Fed’s bond buying and argue that once it had pushed short-term rates near zero, it had to use unconventional programs to support the economy. She’ll likely stress that the Fed is monitoring financial markets and has the means to defuse any bubbles. At her confirmation hearing, Yellen made clear she still saw unemployment as a serious problem and felt the Fed’s low-rate policies were still needed.