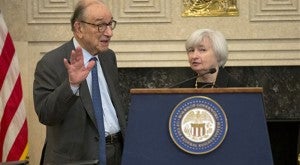 WASHINGTON—The Senate confirmed Janet Yellen on Monday as the first woman to lead the United States Federal Reserve, elevating an advocate of fighting unemployment and a backer of the central bank’s efforts to spur the economy with low interest rates and massive bond purchases.

Yellen, 67, will replace Ben Bernanke, who is stepping down after serving as chairman for eight years dominated by the Great Recession and the Fed’s efforts to combat it.

Senators voted to confirm her by 56-26 margin, with numerous absences caused by airline flight delays forced by arctic temperatures around much of the country. All 45 voting Democrats were joined by 11 Republicans in supporting Yellen, while 26 Republicans voted “no.”

Vice chair of the Fed since 2010, Yellen begins her four-year term as leader of the century-old bank on February 1. With the economy rebounding from the depths of the recession but only modestly so far, many economists expect her to focus on how to nurture growth without putting it into overdrive, which could risk fueling inflation.

“The big debate will be when the Fed should tighten and how much, rather than when to step on the gas pedal and how hard,” predicted Bill Cheney, chief economist for John Hancock Financial Services, who envisions a growing economy this year.

Under Bernanke, the Fed has driven short-term interest rates down to near zero and flushed money into the economy with huge bond purchases, which it has just started to ease. Yellen, a strong Bernanke ally, has supported those policies and is expected to continue them until concrete signs emerge of sustained improvement of the economy and job market.

In a written statement, President Barack Obama said Yellen’s approval means “the American people will have a fierce champion” who will protect them.

“I am confident that Janet will stand up for American workers, protect consumers, foster the stability of our financial system and help keep our economy growing for years to come,” Obama said.

Lobbyists for the banking and financial services sectors issued statements pledging to work with Yellen. Both industries have led a fight to water down restrictions imposed by Obama’s 2010 law overhauling how the U.S. financial system is regulated.

A native of Brooklyn, New York, Yellen previously headed the Federal Reserve Bank of San Francisco, chaired President Bill Clinton’s Council of Economic Advisers and has been an economics professor at the University of California at Berkeley.

Yellen, who as an academic has focused on unemployment and its causes, is considered a “dove” who wants the Fed more focused on creating jobs because unemployment is high and inflation is low. “Hawks” on these issues prefer a stronger emphasis on preventing inflation.

In brief debate on her nomination, Democratic Sen. Sherrod Brown, lauded Yellen, who was one of the first to warn in 2007 of a housing bubble that could burst and damage the entire economy.

“She understands how risky financial practices deep inside the largest Wall Street banks can have a terrible and terrifying impact on American families,” Brown said.

“No one can deny that the risks are real and could be devastating” if those policies continue for too long, Grassley said.

Yellen’s Republican critics have said the Fed has inflated stock and real estate prices by pumping money into the markets, creating investment bubbles that could burst and wound the economy anew.

Some also warn that as the Fed starts to trim its bond holdings, it could spook financial markets, threatening the economy’s recovery by causing stock prices to drop and interest rates to rise.

Last month, the Fed announced that it will start gradually reducing its $85 billion in monthly bond purchases, trimming them back initially to $75 billion this month and taking “further measured steps” as economic conditions improve.

But the Fed also indicated that it will keep supporting an economy that it considers less than fully healthy. It said it will continue to keep interest rates low and try to boost unusually low inflation, which can slow spending and borrowing.

The Fed’s holdings have reached $4 trillion, more than quadruple their level before the financial crisis hit in late 2008.

The U.S. economy has grown only modestly since the Great Recession officially ended in June 2009, though it has shown encouraging signs in recent months.

Unemployment fell to 7 percent last month, down from a recent peak of 10 percent in October 2009. The economy grew at an annual rate of 4.1 percent from July through September and has added an average 200,000 jobs monthly since August.

President Barack Obama nominated Yellen in October after considering selecting Lawrence Summers, a former Treasury secretary who had been a close Obama adviser early in his presidency. Summers withdrew after opponents complained about his temperament and past support for bank deregulation.

Obama called Yellen a “proven leader” and hailed her frequent focus on the unemployed, saying, “She understands the human cost when people can’t find a job.”

She will be the first Fed chair newly appointed by a Democratic president since Paul Volcker, picked by President Jimmy Carter, left the post in 1987. Clinton reappointed Alan Greenspan and Obama gave Bernanke a second term, though both were initially chosen by Republican presidents.

Yellen will preside over her first Fed meetings as chair on March 18 and 19.

The Federal Reserve was created as the U.S. central banking system in 1913 at a time when the U.S. was undergoing a series of financial panics. It sets the nation’s monetary policy—including raising or lowering interest rates—with the goals of maximizing employment and stabilizing prices. It also supervises and regulates banking institutions.

Yellen is Obama choice to succeed Bernanke at Fed