Gov’t to decide on fate of 6 AFP camps 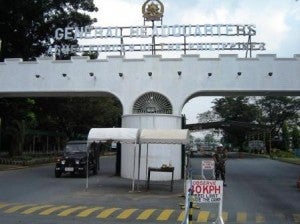 State-run Bases Conversion Development Authority is deciding whether to sell, lease and develop, or retain and upgrade six Armed Forces camps across the country, including Camp Aguinaldo in Quezon City (shown in photo), in a bid to further maximize the potential of these pieces of property. FILE PHOTO

State-run Bases Conversion Development Authority (BCDA) is deciding whether to sell, lease and develop, or retain and upgrade six Armed Forces camps across the country, including Camp Aguinaldo in Quezon City, in a bid to further maximize the potential of these pieces of property.

In a briefing on Wednesday, BCDA president Arnel Paciano D. Casanova said that among those being considered aside from Camp Aguinaldo were Fort Magsaysay in Nueva Ecija (47,468 hectares); Camp Peralta in Capiz (33,220 ha); Camp O’Donnell in Tarlac (1,925 ha) and Camp Kibaritan in Bukidnon (42,000 ha), all owned by the Armed Forces of the Philippines.

The Zambales-based Naval Station San Miguel (960 ha), which is owned by the BCDA, is also included on the list, Casanova added.

He said the goal was to help modernize these camps, which have idle or unused areas that could be tapped for either redevelopment for mixed-use purposes or to create livelihood in the countryside, particularly for the camps located in the provinces.

“We now need master plans for these camps to identify whether we will retain them or develop them. The bidding for the [entity] that will conduct the master plan is expected to be completed within six months, while the master plan itself can be finished in another six months,” Casanova explained.

The master plans, together with the consultations with the Department of National Defense and the Armed Forces of the Philippines, will become the basis of what will be done with the six identified camps.

Based on an initial assessment, the camp that would most likely be retained and upgraded is Camp O’Donnell in Tarlac as it is located strategically—near Subic and Clark and at the heart of the Subic-Clark-Tarlac Expressway, the Tarlac-Pangasinan-La Union Expressway and the North Luzon Expressway, Casanova said.

As for Camp Aguinaldo, Casanova noted that there were areas within the 176-ha camp that were not being used. It was also being considered whether there was a need for such camps in Metro Manila or if smaller command centers would suffice.

The BCDA is targeting to bid out this year to interested parties five contracts valued at about P75 billion for either asset sale or long-term lease and development.

In terms of gross proceeds from existing leases, the BCDA expects to collect some P6.5 billion this year, up from P6.02 billion last year. Compared to 2012, last year’s collections reflected an increase of P850 million.