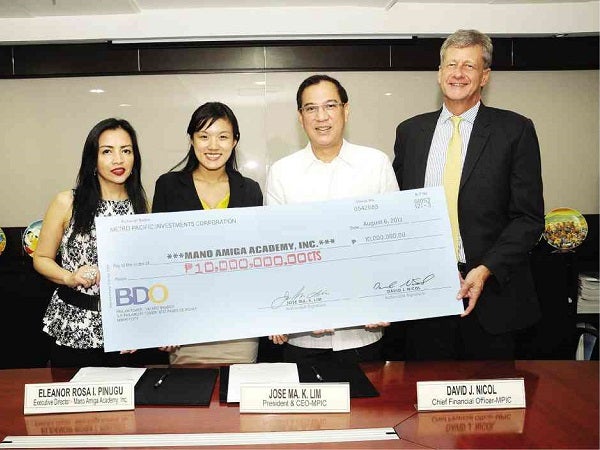 One could say that Manila Amiga Academy—a primary school that caters to an indigent community in Taguig City—is a victim of its own success.

Starting with only 60 scholars in 2008, the educational institution’s population has since grown to 110 students as it adds an academic level each year and accepts more applicants from the ranks of indigent families living in the FTI complex just a stone’s throw away from the upscale Bonifacio Global City.

“There are about five students competing for every slot we make available in the school,” says 28-year old Lynn Pinugu who is the school’s executive director. “So there is a real demand from the immediate and adjoining communities.”

And it is easy to see why. The school was conceptualized with the goal of providing international school-quality education to children from underprivileged families, some of whom could not even spare the resources necessary to send them to public schools.

Mano Amiga Philippines, the local affiliate of a chain that runs similar schools in Latin America, opened its doors for kindergarten students in 2008 and has seen its student body grow by one grade level each year.

“We grow internally as the students progress through the program but we also have transferees from outside,” says Pinugu who adds that the school’s reputation has now spread far beyond the immediate environs of Taguig, where its temporary facility stands.

It’s present campus—a two-story building on a 300-square meter property within a Habitat for Humanity housing project—is packed to the brim with students on any given school day.

Pinugu says the school needs space to grow by one batch of approximately 35 students each year.

The search for a new campus led her to a 2,350-sqm property in Better Living Subdivision in Parañaque City which was available for sale. It is an ideal site to relocate the school as it is only 15 minutes away from the present campus.

Enter the Metro Pacific Investments Corp., whose president Jose Ma. Lim has long been a supporter of Mano Amiga. The infrastructure firm recently donated P10 million to the school for it to finance the acquisition of the property where its future campus would rise. 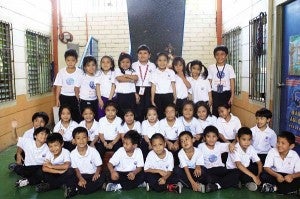 SCHOLARS pose for the camera at the lobby of their Taguig campus.

At full capacity, the new campus is envisioned to be able to accommodate almost 1,000 students in a full K-12 educational system.

“MPIC a big believer in education as a tool for moving this country forward,” Lim says, explaining why the company chose the school as a beneficiary of its corporate social responsibility program. “With Mano Amiga, we are actually investing in the future of the Philippines by helping empower people through education.”

MPIC, of course, supports a wide range of CSR activities and social enterprises ranging from those involved in environmental advocacies to disaster relief. But education has a special place in the company’s roster of charitable activities.

“The benefits [of helping education] to us and the country are concrete,” says MPIC’s communications head Melody del Rosario. “You help secure the future of the community and the country, and we as employees are uplifted when he see the students while interacting with them.”

Previous to this financial grant, Mano Amiga has also been receiving donations from MPIC annually which help cover the cost of its operations, not least of which is the salaries of 10 staffers that include eight highly-trained teachers.

“We pay our staff well because we want the students to receive the best education possible,” Pinugu says.

“MPIC is an amazing partner. They’ve been very supportive,” Pinugu says, but quickly adds that she wants Mano Amiga to move away from being donor-dependent to being able to stand on its own two feet.

As the school’s chief fundraiser, she is all too aware that relying too much on the generosity of others can lead to “donor fatigue” no matter how affluent its benefactors are.

It has already begun to make inroads, recently putting up “Bistro 3846” which is a cafeteria in Everest Academy in Taguig staffed by parents of Mano Amiga students. It had also recently branched out into catering services, and Pinugu wants to increase the scale of the business whose profits return to the coffers of the school.

This adds to the modest revenues the school gets from tuition fees paid by the students’ parents pro rated according to each family’s capacity to pay.

For now, however, a significant portion of Mano Amiga’s operational costs are still funded by donors. And because many of the school’s donors have been diverting their resources to fill the urgent needs of the survivors of the recent Supertyphoon Yolanda, Pinugu expects a challenging year ahead in her efforts to raise the funds needed for the new campus.

“Of course, the needs of Yolanda victims are important, and we understand that,” Pinugu says. “So yes, we need funds from donors, but we also appreciate them giving us the means to help ourselves—like help in kind, or expertise or connecting us with other parties who are willing to invest in education.”

“Eventually, the goal is to become a fully self-sustaining social enterprise,” she says. “This is the best way to repay our stakeholders and supporters and make them proud of what we’ve achieved together.”