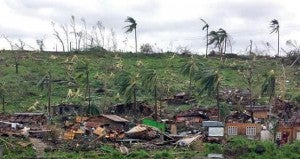 BACOLOD CITY, Philippines—The Negros Occidental provincial government is importing chicks from Luzon as a long-term solution to the egg-and-chicken shortage that has hit the province in the wake of Supertyphoon “Yolanda” (Haiyan).

Since the province produces only around five million eggs monthly, it needs to make up for the four million deficit by sourcing it from Bantayan Island in Cebu. But with the Bantayan egg industry practically wiped out by Yolanda, Negros Occidental has had to look to places like Batangas to meet the shortfall in the supply of eggs, Decena said.

At present, the supply of eggs in  markets and groceries in Negros Occidental has decreased. The shortage in supply resulted in an increase in prices, which have gone up by as much a P1.20 each, over the previous price of P5 to P5.50 per egg, he said.

There is also less dressed chicken in the market, Decena said.

This prompted the provincial government to import chicks as a long-term solution, which would be dispersed to multiplier farms.

The provincial government is importing 2,000 chicks to augment the stock at its breeder multiplier farms in Hinobaan, Sipalay, Kabankalan, La Carlota, Cadiz, Sagay, Ma-ao in Bago and Calatrava, Decena said.

Grown chickens would then be distributed to backyard farmers along with specially designed layer coops where newly laid eggs roll down to a receptacle for quick collection, he added.

Decena said Yolanda caused damage of P31.3 million to poultry and P26.2 million to livestock in Negros Occidental, or a total of P57.6 million.

He said the provincial government has allocated P5 million to mitigate livestock and poultry losses. Of this amount P2 million will be spent to buy chicks and chickens.

The Department of Agriculture also committed P16.5 million in assistance to the province, P8.4 million of which would be for animal dispersal, P5.6 million for pasture rehabilitation and P2.5 million for the repair of animal breeding centers, he said.

These projects are expected to be implemented by the first quarter of next year.

DENR maintains Manila Bay dolomite sand not being washed out