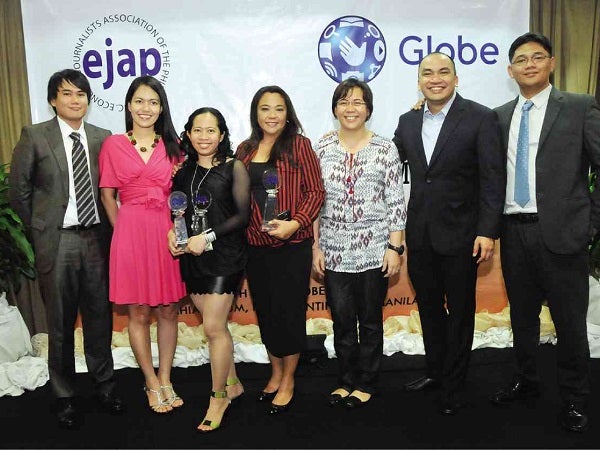 For the second year in a row, the Philippine Daily Inquirer has been named “Best Business News Source” by the umbrella organization of the country’s economic reporters.

The honor was bestowed on the Inquirer by the Economic Journalists Association of the Philippines (Ejap) during the 22nd Ejap Business Journalism Awards, presented by Globe Telecom Inc., on Friday.

The Inquirer received three awards through two members of its business team, who were named as the best reporters on their respective beats for the year.

Riza Olchondra was honored as Reporter of the Year twice in a single year for her coverage of both the agriculture and the trade beats.

Veteran reporter Doris Dumlao was honored for her coverage of the capital markets beat.

They were Olchondra’s third and fourth Ejap Awards in her journalism career.

Dumlao’s award was her 12th.

Tying with the Inquirer for the “Best Business News Source” award this year was Malaya, whose reporters also received three awards.

The other members of the group are editors Tina Arceo-Dumlao, Margie Quimpo-Espino and Eric Olona, and reporters Daxim Lucas, Michelle Remo, Ronnel Domingo, Amy Remo, Paolo Montecillo and Miguel Camus, and editorial assistant Princess Ominga. Most of them were award recipients in previous years.

Other winners in this year’s Ejap Awards were Malaya reporters Jimmy Calapati for the banking beat, Richmond Mercurio for the energy beat and Angela Lorraine Celis for the macroeconomy beat; BusinessMirror reporters Lenie Lectura for the telecommunications beat and VG Cabuag for the best feature story; and Philippine Star’s Iris Gonzales for the finance beat.